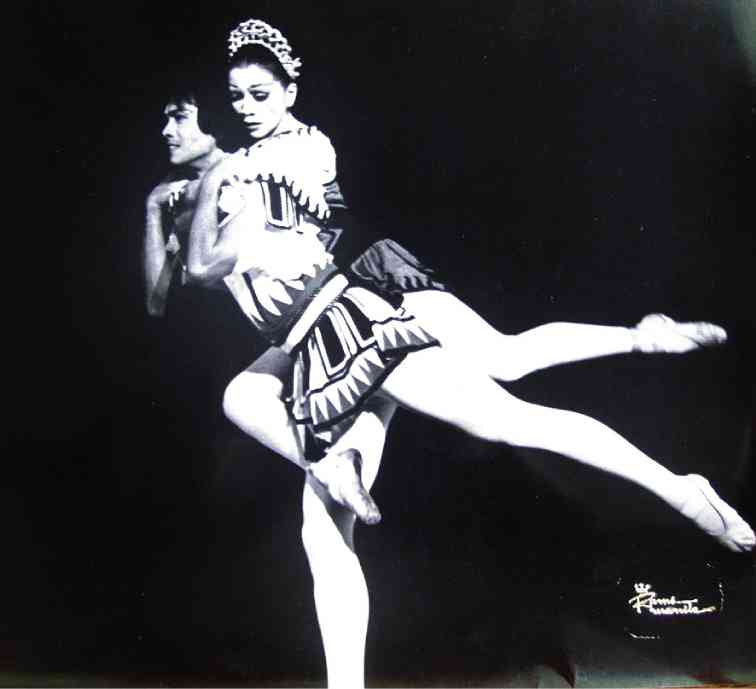 ANOTHER scene in “Medea”

Vella Damian has danced her way through life

To hear her aunties tell it as she was growing up, Vella Damian, who turns 77 in November, never walked. She always danced.

Dancing must have been what she had always wanted to do, though she was surrounded by a musical family, the kind that gathered around the piano, sang songs or went to movie musicals and live performances in the Manila of the ’40s and ’50s.

She said, “I love dancing very much! I am happiest when I dance. I love the feel and sensation of moving to beautiful music, not the roar of just deafening sounds. To dream, perchance to dance!”

Unforgettable to her generation were the movies “The Red Shoes,” “Unfinished Dance” and “Story of Three Loves,” all implanting the dream to be a ballerina as graceful as Moira Shearer.

After high school, Damian got a scholarship to study dance under Remedios “Totoy” de Oteyza.

After that summer, Damian wanted to return to St. Theresa’s College for her tertiary education, but there was a conservative ballet ban being enforced so she went to the University of Santo Tomas instead to major in music.

She described the era then: “It was the time of the Mary-like look. No spaghetti straps for girls. We weren’t allowed to be seen wearing shorts in public.”

But there was an ICM nun, Sister Lamentina, who sympathized with Damian’s passion for ballet. Seeing the young girl’s predicament, she said, “Follow your dream!”

This recognition made a difference. When the nun was assigned to Cebu where young Damian would spend her vacations, the older woman would lock the auditorium, spin a record and watch as Damian performed alone for her.

This went on almost yearly so Sr. Lamentina was able to follow the ballet student’s progress.

From Manila, Damian would write letters describing her dancer’s life.

By the time she graduated from college, she was already performing ballet and jazz live at Araneta Coliseum or taped on TV musicals like “An Evening with Pilita” and “The Carmen Soriano Show.” Damian recalled, “The pay was small, but I saved all of it.”

She danced in the movies with Al Quinn or under Cora Inigo’s Filipiniana Folk Dance Group.

In between she wrote to ballet companies abroad, counted her money and, with enough savings for airfare and dormitory living for a year, she left on a half scholarship at the Joffrey Ballet. Her father, a chemical engineer, supplemented her allowance for another year.

By this time she wasn’t thinking of a dance but a teaching career instead, and going abroad helped increase her knowledge.

The world of dance education meant going through the basic principles of various steps, positions and dance techniques, and opening her eyes to the need for pedagogy.

If romance figured in her life, it didn’t play a prominent part.

Damian said, “I’ve had my boyfriends and love affairs, some serious, but somehow all took a back seat when certain doors opened for me in dance. The call of vocation, the passion and love for dance and education were all stronger.”

Every breakup, “I’d cry for maybe a month, a year, maybe two years, but not all my life. If I didn’t pursue my dear dance, I could not have forgiven myself. There are so many things I’ve experienced in my life that overshadow the regrets.”

Among those experiences is putting up a dance company with Eric Cruz. Since she was still living with her parents, her money went to supporting the company, especially male dancers.

She also helped her teacher Totoy put up the Hariraya Dance Company whose “Swan Lake” became part of the inauguration of the Meralco Theater in Pasig. (Vella was one of the baby swans or cygnettes alongside Maniya Barredo, Nida Onglengco and Nini Mendoza.)

She described most of the shows she has appeared in, like “Carmen,” “Medea” and “Camille,” as involving “acting.”

“I prefer to be dancing with character and acting. I love dance dramas—I get lost in the role. It’s so different from when you’re doing an abstract ballet. I get immersed in a role and the ballet comes alive, instead of you worrying about the next arabesque.

“You don’t feel like you’re going to be lifted; instead you’re going from one point to another. It’s the flow of the character. I go with the feeling at the moment. When the music surges in you, all the moods emerge.”

Asked when she realized her dancing years were over, she recalled how she “hardly had any crucial accidents like sprains, so in the performance of the three-act ‘La Gitana,’ I badly sprained my ankle on opening night. I knew Somebody Up There had whispered, ‘Enough, Vella!’ I had to dance the following night but sans pointe shoes. I had no understudy, so I just prayed so hard for the Lord to guide me and be my strength.”

A teacher’s fulfillment is seeing a student do good or better than her. She cited the younger dancers who grew up with her as maestra, and have made names for themselves here and abroad: Ida and Myra Beltran, Ricardo Ella, Bam Damian, Jun Samblaceño, Yvonne Curtaran, Gina Katigbak, Rupert Acuña and Elline Christine Damian.

When she’s privileged to catch their performances overseas, like Bam’s 30-minute standing ovation at the Palais de Congress in Paris, she could be worse than a stage mom. “I scream my heart out without anyone saying, ‘She’s the aunt kasi.’ My tears are flowing, I am hysterically crying. When I see them onstage, my heart is so big, it feels like it can burst.”

Damian hasn’t slowed down, and helps organize the meetings of the Association of Ballet Academies of the Philippines and the Philippine Association for the Advancement of Dance Studies, and runs her ballet classes at Colegio de San Agustin and her Quezon City home studio (she teaches Saturday and Sunday, from 9 a.m. to 9 p.m., with just an hour-long lunch break).

She attends performances and is known for wearing four-inch-high stilettos to these events.

Still she bemoans how support for dance is at about the same level as the time she started ballet lessons.

She said, “We’re surviving on our own guts!” She lauds the efforts of Eddie Elejar to give public-school children free dance classes. In Cavite, Brezhnev Larlar is producing excellent male dancers.

Vella said the secret is “to pursue your dreams according to how much passion you have for that dream. My passion hasn’t veered from that path. It is still dance.”