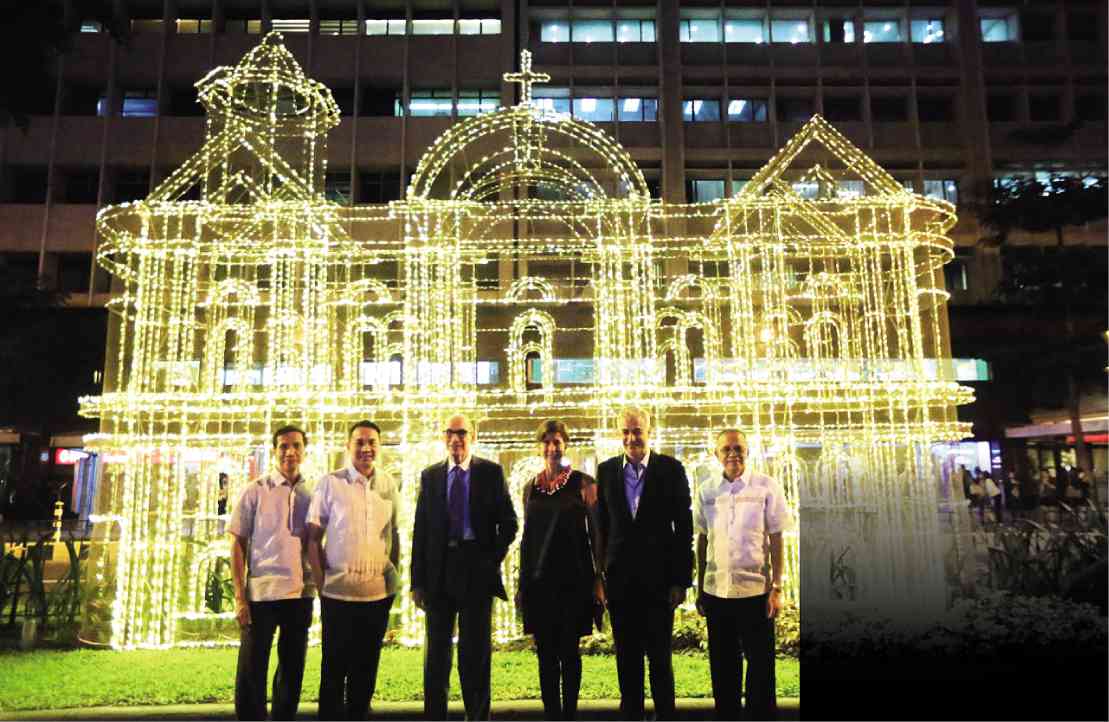 “I’ve been a part of Ayala’s Christmas shows for eight years now,” said Pascual at the recent launch of Ayala Malls’ Christmas activities at Fairmont Makati. “For me, it has become almost like a tradition. It’s been an honor and a privilege. I always look forward to it.”

Present at the launch were Ayala Land Inc. (ALI) officials and members of the Zobel de Ayala family led by patriarch Jaime Zobel, chair emeritus of Ayala Group of Companies.

Zobel, with daughter Sofia Zobel-Elizalde and daughter-in-law Lizzie Zobel, unveiled a replica of his holiday-theme photo collage of dangling lights and Christmas-rush traffic, printed on a huge tarpaulin sheet.

The artwork, another attempt of the Zobel family to make art more accessible to the public, now covers the Greenbelt tunnel connecting Esperanza Street to Makati Avenue.

“It’s my third time with Ayala,” said Milby. “I love doing it. I get to sing songs I’ve never sung before. Last year, for instance, I sang Frank Sinatra songs. This year, it will be an all-Tagalog repertoire.”

Pascual shared the stage with “The Voice of the Philippines” champion Daryl Ong, while Milby performed with Yeng Constantino. The two shows were grouped under Ayala Malls’ “The Sound of Christmas” series. The artists sang live.

“Ayala provides the best programs,” said Pascual. “For a couple years, we’ve had Ryan Cayabyab. This time, I performed with the MSO. Singing with an orchestra, wow, what more can an artist ask for?”

Because of a previous commitment, Pascual did only one show this season, but Milby will be back on Dec. 13, with Aunor at Ayala Center Cebu.

“There will be different sets of artists for each show,” said Rowena Tomeldan, ALI VP for support services, commercial business group. “MSO will be constant in all these shows.”

For a time, the MSO didn’t have a place to rehearse until Ayala Malls, again, in keeping with its thrust of making the arts accessible to everyone, took in the orchestra. Its members now rehearse several days a week at Glorietta 5’s activity area.

Another series of shows dubbed “Frankly Speaking,” which features up-and-coming singers doing jazzed-up versions of Sinatra material, will be touring Ayala Malls in the provinces, including Davao and Cagayan de Oro.

Students of Elizalde, including niece Mercedes Zobel de Ayala, will be among the featured performers in “Frankly Speaking.” The group of young dancers calls itself Steps Dance Project. Elizalde is the director of Steps ballet school.

Of course, kids have also something to look forward to, as Ayala Malls will be featuring well-loved characters George, Mummy Pig and Daddy Pig from the hit British animated series “Peppa Pig.”

There will also be weekend meet-and-greet events with Santa Claus, fireworks displays, Christmas chorales and traditional Simbang Gabi throughout the holiday season at Ayala Malls.

And what’s Christmas without delicious food and unique, wonderful finds?

For two years now, people behind Ayala Malls have been organizing Christmas Market, a holiday bazaar featuring a select group of vendors providing shoppers with ideal and affordable gifts and food items.

Each Ayala mall is allotting space for its Christmas Market consisting of carts and kiosks laden with holiday goodies. Some of these exhibitors are recent discoveries, but all of them have been invited to join the annual event.

“We’re like doing the Christmas shopping for our customers,” said Tomeldan. “Every mall will have its unique finds. All the shoppers have to do is pick from these pre-selected items.”