Who is the Filipino millennial? | Inquirer Lifestyle 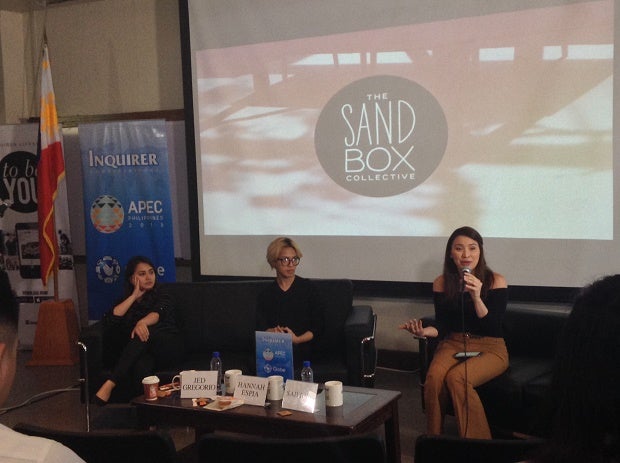 Who is the Filipino millennial?

Who are the so-called “millennials?” Are they grouped according to age bracket, or are they defined by common interests?

These were just two of the questions posed to speakers during the third Inquirer Conversations, with the theme “Millennials of Apec,” at the Ateneo Professional Schools in Makati City on Thursday.

By strict technical definition, the millennial generation comprises of anyone who is born between the early 1980s to early 2000s. It followed the Generation X-ers and the baby boomers.

But for stage actress Sab Jose of Sandbox Collective, assistant director of a play on millennials titled “No Filter,” a millennial is not defined by mere demographics, but more of a psychographic subset. Jose said millennial was just a label coined by sociologists and other groups “to lump us in one category.”

READ: Millennials be like… | Beyond hashtags: Or why catch Sandbox Collective’s ‘No Filter’ | A review of ‘No Filter: Let’s Talk About Me,’ a play about millennials

Noting that millennials are faced with a lot of pressure especially in the digital age, Jose described the generation she belongs to by elaborating on the various issues hounding fellow millennials like her.

“Everything happens in such a fast pace that we can hardly keep up,” Jose said, adding that millennials want to do so many things with so little time.

“Because we have so many options, it’s difficult for millennials to decide and commit. You’re presented with so many options that you don’t know what to do anymore,” she added.
READ: What makes a millennial?

But Jose said millennials are best characterized by their love for collaboration and authenticity, creativity, and passion for innovation.

For filmmaker Hannah Espia, director of 2013 independent film “Transit,” the Philippine entry to the 86th Academy Awards, the term millennial had a negative connotation owing to a certain sense of privilege and entitlement associated with it.

“I initially found it as a derogatory term, something associated with people who are very self-centered,” Espia said.

“Not everyone is going to be a star basketball player just because they want to… We feel that it’s our privilege that if we want something, we will have our own 15 minutes of fame. It’s scary,” she added, noting that “people always wanted to be remembered.”

Espia said millennials feel a “great sense of entitlement” because “things were just given to us from the day we were born.”

“We grew up with the privilege of freedom,” she said when asked what makes the Filipino millennial different from others.

But despite being commonly regarded as selfish or self-centered, Jed Gregorio, editor in chief of Scout, the Inquirer Group’s monthly culture magazine for millennials, said millennials also suffer from low self-esteem.

“Self-doubt is a real problem, but there’s a kind of self-doubt that is narcissistic,” he said.

To combat self-doubt, Jose advised her fellow millennials to refrain from comparing themselves with others, as life is a “journey and not a competition.”

“It’s okay to work for the approval of other people or to make your parents proud if that’s what makes you happy. But you should decide why you are doing what you are doing . When you do that, you’ll be more focused on your goal,” Espia added.
Technology and diversity

Asked about how millennials like him can help address national issues, Gregorio highlighted the diverse skills and talents that the new generation possesses.

“This is a generation with the most diverse set of interests,” Gregorio said, noting that national issues are not just about politics, but also other fields like education and health.

Jose, meanwhile, underscored the millennials’ wide access to information through technology as a potential tool in nation-building.

“If we use that access [for] the good of the society, that will really help. If we use that to start conversations, I guess that will help in bridging the gap,” Jose said.

“There’s a huge disconnect despite technology. It aids you on one hand, but it causes a great divide on the other… Technology is more than just gadgetry and trends. You shouldn’t let technology control you, but you should control technology,” she added.

Despite differences and distinctions, Jose said generations are bounded by a common pursuit. “We are all trying to figure things out. At the very core, we want the same fundamental things,” she said.

Concluding the conversation, moderator and INQUIRER.net editor in chief John Nery noted that “there’s in fact a continuity” among generations.

“Each generation has a distinctive gift to offer,” he said. CDG

Attention millennials: You ain’t seen nothing yet

The Filipino millennials: FEU study can make you :-) or :-(