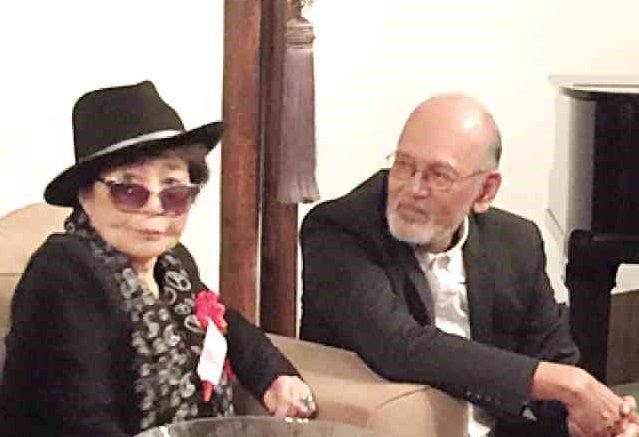 When artists meet, they always have something to talk about. Such was the case when National Artist Benedicto “BenCab” Cabrera met Yoko Ono, musician, artist and widow of Beatle John Lennon.

BenCab was a guest at the launch of the “History and Heritage of the Kudan: The Official Residence of the Philippine Ambassador to Japan,” a book written by Filipino historian Ambeth Ocampo, held last Nov. 10 at the Philippine ambassador’s residence in Chiyoda Ward, Tokyo.

The historic building once belonged to the family of Ono, who lived there as a child.

“I was thrilled to meet the legendary Yoko Ono, and was privileged to have a few minutes with her,” Cabrera told Inquirer Lifestyle. “We spoke about her exhibition and performance at the Exploding Galaxy, the art center in London where David Medalla also exhibited.”

Ono described herself as more of a performance artist than a painter, Cabrera said, and expressed admiration for his work, “Flight,” one of three paintings brought to Tokyo and hung at the embassy residence by Philippine Ambassador to Japan Manolo Lopez, a foremost BenCab collector since the ’70s.

Ono also told Cabrera that she was hoping for “good relations between Japan and the Philippines.”

According to a report by Fumiko Endo of Japan News, the Chiyoda property was owned by the Yasuda family, which operated a prewar business conglomerate.

The house was built in the early 1930s by Ono’s uncle, Iwajiro Yasuda, and sold to the Philippine government in 1944. It was declared a national historical landmark by the National Historical Commission of the Philippines in 2013. Filipinos call the house “Kudan,” Endo wrote, because it is located near the Kudanshita subway station.

Lopez hosted a cocktail reception in the residence, where Ono gave a speech.

A choir also dedicated a song to the special guests: John Lennon’s “Imagine.”

Yoko Ono in the Philippines’ ‘Kudan’