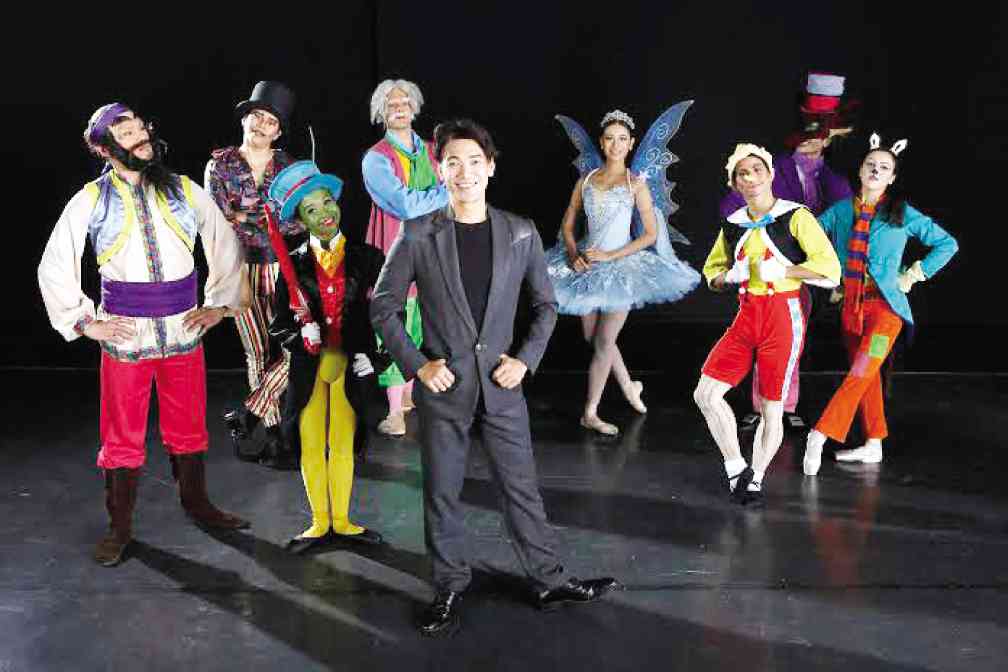 BALLET Manila ushers in Christmas with the Osias Barroso-choreographed “Pinocchio” on Nov. 27-Dec. 6.

“Pinocchio” is the third offering of From Page to Stage, Ballet Manila’s 20th performance season. Based on the Italian children’s novel by Carlo Collodi, it was the second animated film by Walt Disney in 1940, following the success of “Snow White and the Seven Dwarfs.”

It tells the story of Geppetto, the wood carver who lovingly created the puppet Pinocchio. Brought to life by the Blue Fairy, Pinocchio promises to be brave, truthful and unselfish so as to become a real person.

Pinocchio finds a true friend in Jiminy Cricket. Together they hurdle every challenge and outsmart villains like the Cat and the Fox, the vicious Stromboli, the evil Circus Master and the giant whale.

Ballet Manila’s “Pinocchio” is choreographed by Barroso, co-artistic director of Lisa Macuja-Elizalde. Initially a one-act piece, it was always included in the company’s lineup of shows. With its timeless appeal, this year the audience will enjoy “Pinocchio’ as a full-length production, Ballet Manila’s Christmas treat to its loyal patrons.

“Dance companies stage ‘Pinocchio’ not only because it’s a children’s ballet show; it also reminds us of the value of family and friendship,” said Barroso. “This is very evident with the relationship of Geppetto and Pinocchio and the friendship between Jiminy Cricket and Pinocchio. What I like most about the material is the lesson on truthfulness. Pinocchio’s nose grows longer whenever he tells a lie; I think everyone grew up with that fantasy.”

“Pinocchio” has become one of Ballet Manila’s most successful productions.

“It stood the test of time. It had an impressive track record in terms of sales and audience feedback. Our biggest challenge was finding suitable music for the ballet, but I am glad that we were able to come up with a beautiful score. The music of ‘Pinocchio’ has a lot of heart,” Barroso said.

When he was still actively performing, Barroso was hailed as the “ballerina’s prince.” His partnering skills were ranked “extraordinary.”

Equally impressive were his accomplishments as a solo artist playing the lead roles in full-length ballets, such as “Le Corsaire,” “Don Quixote,” “Swan Lake,” “Giselle,” “La Bayadere,” “The Nutcracker,” “Coppelia,” and “Romeo and Juliet.”

He helped establish Ballet Manila with Macuja-Elizalde in 1995.

Pinocchio will be played by danseur Alvin Santos, one of Ballet Manila’s most senior company members.

“Alvin was the first male Filipino danseur to receive a finalist certificate in the Asia-Pacific international ballet competition held in Tokyo, Japan, in 2003,” Barosso said.

“The role is quite unusual because, most of the time, the male dancer needs height and strong partnering skills,” said Macuja-Elizalde. “‘Pinocchio’ is a wonderful opportunity for a not-so-tall but technically strong male ballet dancer to shine.”

“The story is very visual, with settings very well suited for dancing,” she said.

She herself had played the Blue Fairy.

To further enhance the magical journey, Fil-Am singer Tippy dos Santos will be the show’s storyteller.

Tickets are available at all Ticketworld outlets, online at www.ticketworld.com.ph, or call 8919999.

It has special rates for group bookings. Schools, companies and organizations can get specially priced tickets for fund-raising events and other holiday activities. For inquiries, call 5527502 or e-mail [email protected]