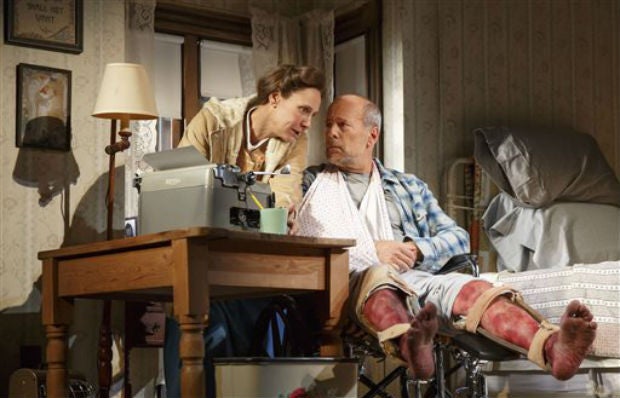 In this image released by Polk and Co., Laurie Metcalf portrays Anniw Wilkes, left, and Bruce Willis portrays Paul Sheldon during a performance of "Misery" at the Broadhurst Theatre in New York. AP

NEW YORK — In the end, “Misery” isn’t total misery. It’s just weird. Apart from the fact that it’s a completely unnecessary adaptation, you oddly start to root for the monster, not the bona fide action hero.

That’s because Bruce Willis makes an appallingly ill-conceived Broadway debut in the thriller that opened Sunday at the Broadhurst Theatre. But Laurie Metcalf rescues the “Die Hard” stud by doing enough good acting for both of them.

Nowhere this season on Broadway is there an acting gulf as wide between two leads than here. Willis has decided to squint a lot, mumble and rely on some “Moonlighting”-era quipping, not to mention an earpiece that feeds him lines. The artificial snow that falls on the set has more dynamism.

Metcalf, who some will know from the TV show “Roseanne,” is a Steppenwolf Theatre Company veteran who plays a towering psychotic — girlish one minute and inhuman the next. She’s so good that she starts making sense. She’s so good you care about her, even if she’s waving a gun menacingly.

The action takes place in a lonely, snow-encased Colorado town. While driving on an icy road, novelist Paul Sheldon crashes and is pinned in his car, with a new manuscript tucked away in his nearby briefcase.

Metcalf plays Annie Wilkes, his so-called No. 1 fan who obsesses over Sheldon’s nine-book series about a 19th century English heroine named Misery. Wilkes finds poor Sheldon, frees him from the car and takes him to her home to nurse him back to health.

The play opens here, with Metcalf the ever-devoted fan-girl and Willis in bed looking like he’s been hit by a train. It’s hard to act when you’re immobile but Willis doesn’t try, merely groaning a lot. After all, deep down, he knows this is Metcalf’s show.

Wilkes’ down-home likeability soon vanishes when she reads both Sheldon’s latest manuscript and then his new book in which the author has killed off Misery. She forces him — using torture and drugs — to literally write for his life.

William Goldman penned the 1990 film version of Stephen King’s novel — starring James Caan and Kathy Bates, who won an Academy Award — and adapted the book for the stage. It’s oddly dark and funny at the same time. (He includes the famous scene in which a sledgehammer is used on Sheldon’s ankles, and it actually produces cheers from the audience. Go figure.)

Director Will Frears has managed to keep the action boiling like a noir thriller, with the actors moving cinematically through David Korins’ nifty house on a turntable set. Lighting designer David Weiner works overtime to create daylight and nighttime for the months Sheldon is held, and Michael Friedman wrote intriguing music that is woven onto the dialogue and scenes.

Everyone is doing their best here except one guy, the one drawing the high ticket prices. But apparently no one told Willis he was in a thriller; he seems to think he’s in a quirky romantic comedy. Maybe someone should tell him in his earpiece. TVJ