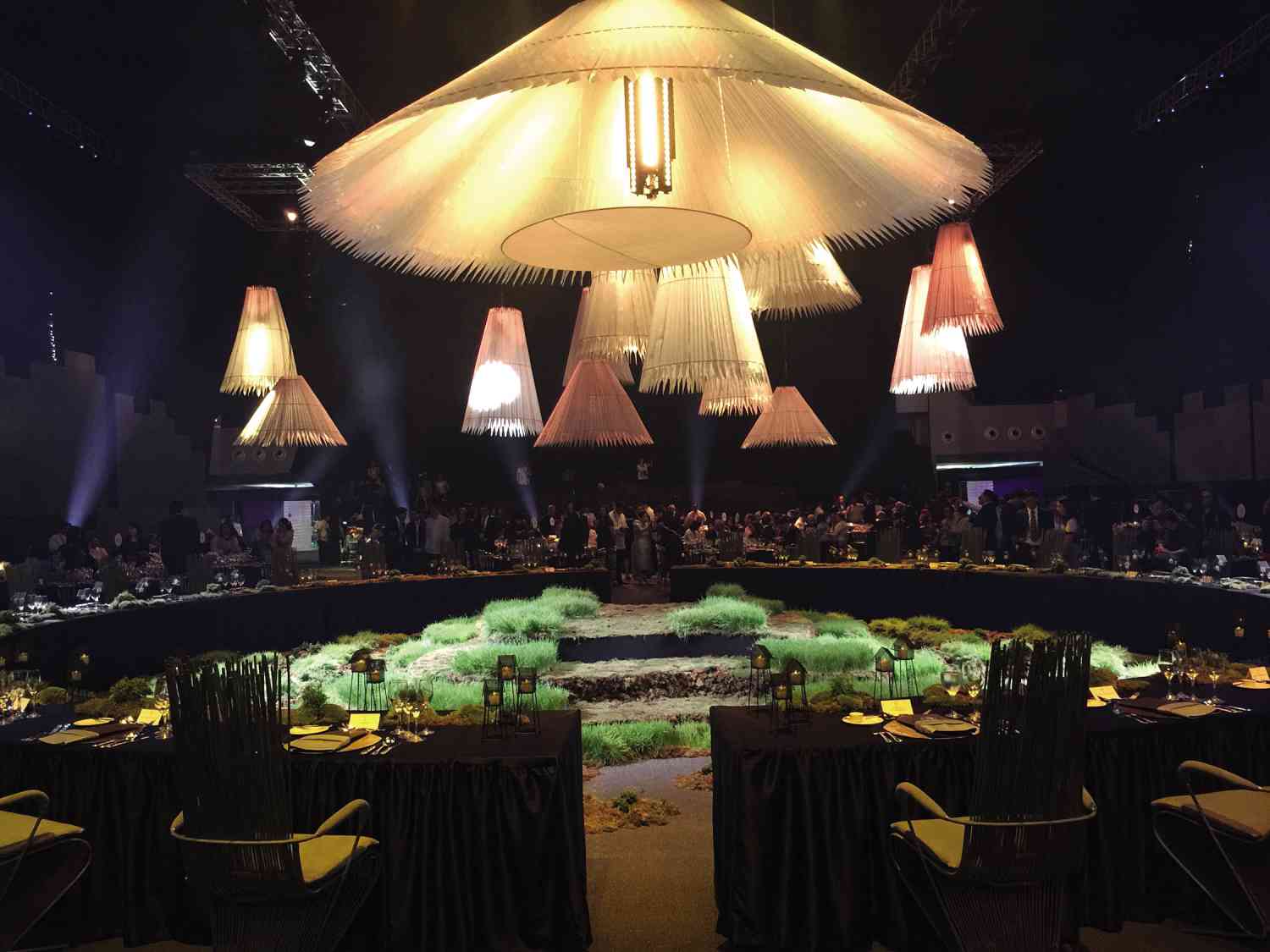 IN A NEW LIGHT At the Apec reception dinner on Wednesday at SM Mall of Asia Arena, the hanging lights designed like “anahaw” (local palm) leaves by Kenneth Coponbue put the Filipino’s artistry, simple yet dramatic exuding a welcoming warmth. Impressed Apec leaders and guests described the decor’s aesthetic as innovative but starkly minimalist. Note yoda chairs around the round table where the 21 leaders sat down to dine. (See more photos on Page A22.) INQSnap this page to view more photos. THELMA SIOSON SAN JUAN

The Philippines took its place on the world’s center stage Wednesday night and did so with such warmth and bravura that it made up, arguably, for the country’s meager resources and infrastructure.

Add to this the Filipino’s cutting-edge artistry known to some degree the world over, and one would know why the welcome reception for the leaders of the Asia-Pacific Economic Cooperation (Apec) forum proved memorable not only for Filipinos, but also for the foreign guests.

Mexican President and social media Apec hottie Enrique Peña Nieto was, in fact, overheard as saying how impressed he was with Metro Manila and the people he had met.

The reception venue was as impressive, as the SM Mall of Asia Arena in Pasay was turned into a tropical yet modern setting, even as its entire vicinity, including the country’s biggest mall, was closed off to the public.

The reception was designed as well to show a Philippines that was uniquely oriental yet modern, progressive—and warm.

Tapped to create such ambience were the country’s leading furniture and industrial designers who came up with pieces that were tasteful and enterprising without being extravagant.

Coming up the escalators, guests were met with the sight of pocket gardens lush with ferns, bamboo and other plants that thrive in the country designed by leading landscapist Ponce Veridiano.

The VIP lounge, the cocktails venue on the second floor, was decked out like a tropical resort—not over the top but enough to showcase our furniture and home fixtures that are gaining a high-end market abroad.

Top furniture designer Milo Naval arranged clusters of his  furniture—with its clean, modernist line—amid coconut trees. Naval has always been inspired by his native Bicol region and used materials indigenous to its provinces. Around the lounge stood columns covered with cutouts of coconut husks—their circular patterns repeated all throughout (said to be lucky feng shui, by the way).

The lounge, where President Aquino and  the other Apec leaders rested before going to the dinner hall, was covered in green carpet, Naval’s sofas and butaka chairs clustered amid plants.

The bar had local liquor fast gaining popularity abroad, such as Liqueur de Calamansi, Liqueur de Dalandan and the famous Mango Rum, all from Destileria Limtuaco and served by young mixologists.

The guests were a power mix of Philippine business, industry and government leaders. Even those rarely seen at socials were there—like Philippine Airline’s Lucio Tan and Oishi man Carlos Chan.

Just as visible were presidential candidates Vice President Jejomar Binay and Mar Roxas, who mingled with the foreign delegates and guests, the most popular being Jack Ma, the Alibaba founder said to be the richest man in China.

Guests took turns having their photographs with Ma, including business leader Hans Sy who gamely clicked the camera for fellow tycoon Lance Gokongwei.

One could hardly drop a pin at the cocktail area. It was so packed that the phrase “rubbing elbows” became a literal description.

As dinner time neared, guests were ushered to the ground floor, to the vast arena—the site of huge concerts and sports events. The arena was turned into a vast dinner hall draped in black—stark enough to show off the hanging anahaw-like chandeliers made of pylon designed by Kenneth Cobonpue.

Cobonpue’s design drew oohs and ahhs from the guests streaming in. It was dramatic without being outlandish. The minimalist aesthetic that this industrial designer has developed through the years of designing for the world market was very evident.

Dominating the center of the hall was the round table where the Apec leaders would be seated—on Cobonpue’s iconic Yoda chairs.

At the center of the  table was a replica of the world wonder, the rice terraces, built of moss and real soil.

The guests waited for some time for the economic leaders to emerge in their sleek barong tagalog designed by Paul Cabral.

In his welcome remarks which, he said, would be “as brief as possible,” President Aquino said “we will all be unified by a shared commitment to setting aside formal speeches, in favor of the kind of friendly, open and informal conversation that I remember so fondly from our past dinners.”

He then led a toast “to the stability and progress of the Asia-Pacific … and to the future that we are shaping through Apec … a future in which no one is left behind.”

Even as dessert was being served, the program began with the soaring voice of Jessica Sanchez, of “American Idol” fame, singing the Barbra Streisand classic, “On a Clear Day,” as the award-winning El Gamma Penumbra produced its rich moving imagery on the black-draped walls that now served as screens.

The expansive four walls of the arena served as stage where artists would perform and the videos projected.

Sanchez’s performance was followed by the Bagobo and Kalinga Suite—again to showcase the ethnic and the western that have evolved into the Filipino culture—performed by Douglas Nierras Powerdance, Makiling Ensemble, Ramon Obusan Folkloric Group and Buganda Drumbeaters.

Next came Arnel Pineda and Jed Madela singing “Stairway to Heaven” and showing off the formidable voices that continue to gain them world fame.

They were followed by a Filipino pianist who herself has captivated the world—Cecile Licad—the giant screens revealing, by turns, her hands on the piano keys and her face bearing a fierce expression, as she played Chopin’s “Revolutionary Etude Op. 10, No. 12.”

The show then turned hip when another world-famous Filipino performer, apl.de.ap, sang his “Apl Song,” to be joined halfway by a tyke, Reynan Dal-Anay, doing “Where is the Love.”

Following them were Charice Pempengco and Reynan, with the Philippine Madrigal Singers, singing “Para Sa Bayan.”

Gary Valenciano would later describe as most unforgettable and touching, the experience of singing face-to-face with world leaders. “I knew every second I was doing it for my country,” he said.