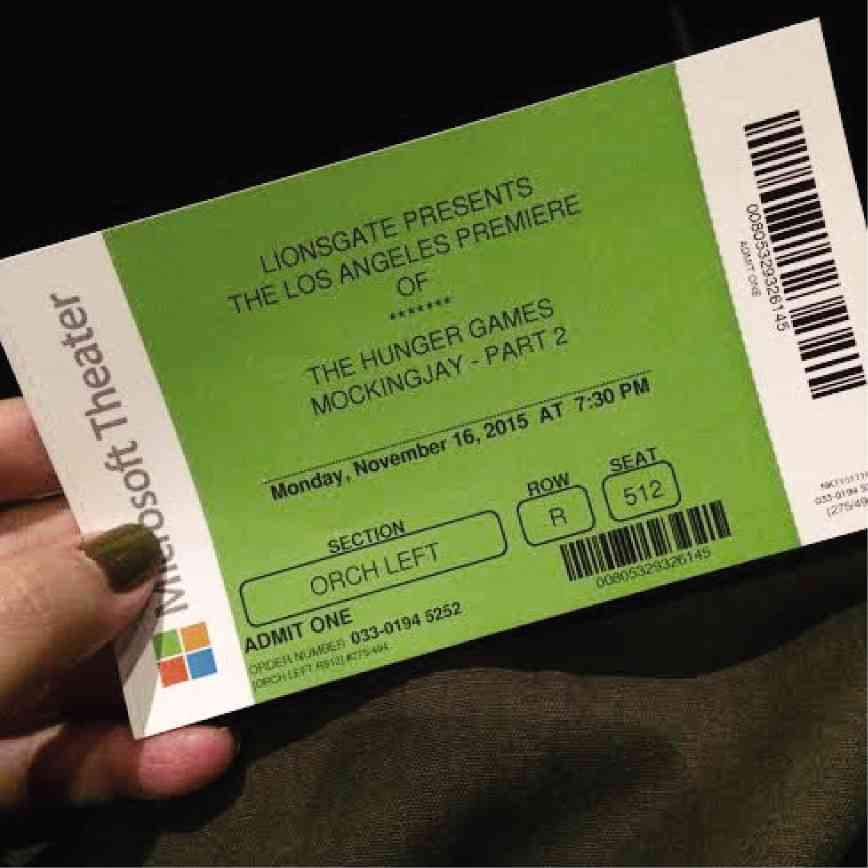 The odds were not in my favor.

One, it was a surprisingly cold and windy California night and I was unprepared. Two, US Vice President Joe Biden had checked into the same hotel, and the road closures caused by his visit had delayed my Uber driver. Three, people had lined up for hours to get wristbands that would give them a good view of the red carpet. Four, I wasn’t even sure I’d be able to enter the area without being stopped by security. Five, I was late. Six, the traffic was bad. Really bad.

So, why did I think I could just amble on to Microsoft Square at L.A. Live to see Jennifer Lawrence’s red carpet arrival?

Because I’m crazy. But it would have been crazier not to try to see the action.

I made it a point to watch the film adaptations on the first day they hit theaters and, yes, I was one of those fans who would shush anyone who dared to make a sound.

I freaking love Jennifer Lawrence. I bawled when she, as Katniss, volunteered as tribute. Sometimes, I see Peeta (and his bread) in my dreams. 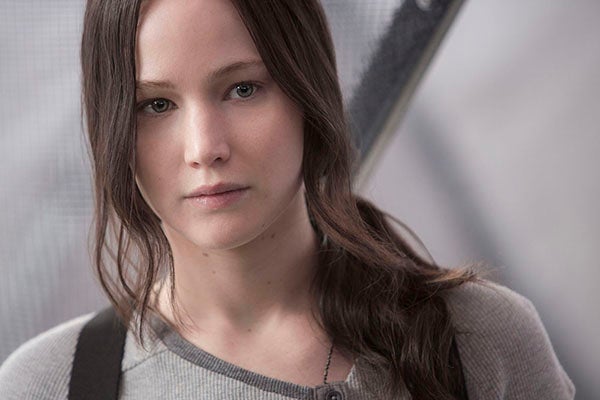 And so, fast-forward to Nov. 16. It was the Los Angeles premiere of “The Hunger Games: Mockingjay, Part 2,” the final movie in the film franchise, and I happened to be in the same city. I had to go.

As the Uber car tried to hurtle as fast as it could from Beverly Hills to downtown LA, I kept my eye on Periscope and watched as actor Sam Claflin, who played Finnick Odair, and Elizabeth Banks, who portrayed Effie Trinket, posed for countless selfies with fans on the red carpet.

Yes, where was Jennifer? But, unlike the other fans on Periscope, I kept hoping for a delay, wishing for the best-case scenario: that I’d get there right as she did so I can raise my phone as high as I could and snap a picture of the top of her head.

The stars had left the red carpet. My best-case scenario had gone down the drain and I was still 10 minutes away.

I considered telling the Uber driver to just take me to the nearest Chipotle. Or maybe back to the hotel. But I didn’t.

I had a new best-case scenario: I’d take a picture of the empty red carpet area and post a stupid caption.

Upon reaching my destination, I got down somewhere in the middle of the Microsoft Theater, Staples Center and Los Angeles Convention Center. I wasn’t sure where to go. Three feet away, there was a bunch of excited-looking girls who had formed a short line in front of a man and a woman who were handing them what looked like tickets. My heart started beating fast. “Mockingjay” tickets? No way!

I moved a little closer but before I could read what was written on them, I was face to face with the woman holding the tickets.

Real or not real?

My brain scrambled. In my head, I was pulling a Peeta. “You are giving away ‘Mockingjay’ tickets—real or not real?” But I didn’t say it aloud, I just stared at her blankly. She looked at me like I was an idiot before speaking to the other ticket guy as if I wasn’t there. “She doesn’t even know what they’re for!” she scoffed. Then she turned her back on me.

I ignored her and looked at the ticket guy instead. “Those are ‘Mockingjay’ tickets, right?”

“You mean I can just get one?”

He handed me a ticket. Behind me, I heard more girls whooping and shrieking as they got theirs, too.

And before I realized what was happening, I was being whisked into the Microsoft Theater where I was asked to find my seat. Orchestra Left, Row R, Seat 512.

I sat down and stared at the ticket, my hand trembling:

I still didn’t understand how, but somehow, in a matter of three minutes, I went from being a failed red carpet stalker to a movie premiere guest.

I stared at the sea of people inside the Microsoft Theater which can seat 7,100. On the enormous cinema screen, a giant mockingbird burned. 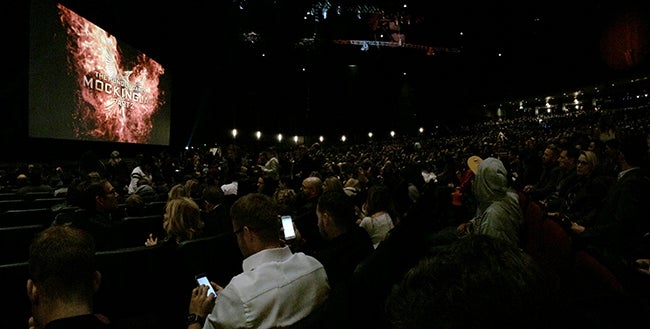 A dad and his daughter sat beside me. “So how did you get your ticket?” the dad asked, after telling me that his daughter was a huge fan of “The Hunger Games.”

“I don’t know, they were just handing them out,” I said, shaking my head in disbelief.

“That’s how we got ours, too,” he said, adding that they had also gotten tickets to the premiere of two of the previous “Hunger Games” films.

“We will begin shortly,” a voice that sounded suspiciously like Effie Trinket’s said. 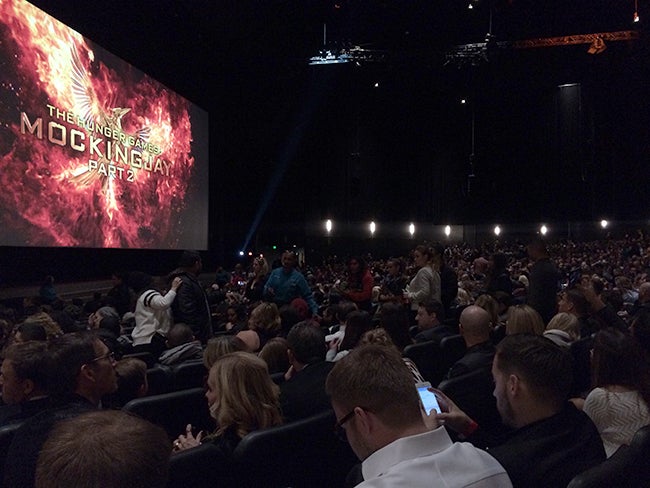 And soon, Lionsgate CEO Jon Feltheimer was onstage. He began with a message for Paris, which was still reeling from the terrorist attacks that happened just three days before this event. He said, “We shot a part of our film there and had just come from our premiere there.

“Tonight, as we celebrate our movie and salute our filmmakers, we want to express our solidarity with the brave people of Paris and share our sympathy for their grieving. We stand with them tonight.”

He continued: “After four movies and 3,700 hours of filming, 24 premieres in 10 cities across three different continents, tonight we come full circle back to Los Angeles where it all began.” The audience cheered.

The evening was doubly special for Jon. “I’m a CEO and also a dad. And tonight is my daughter Maya’s 16th birthday. Happy sweet 16, baby. I love you,” he said, as the crowd erupted in a chorus of “awws.”

Director Francis Lawrence thanked the cast and crew, calling them “the most fun and most loving bunch of people I could ever work with.”

He thanked Suzanne, too. “Suzanne, thank you. Without you, none of us would be here together tonight. Thank you. Thank you for your stories and your patience with us and your guidance.”

And he had a special message for fans of the movie: “Thank you so much for your passion, your love, your loyalty. You’ve been with us from the beginning and you’ve been nothing but supportive. This night is for you.”

One by one, Francis invited the cast to join them onstage, with the screams getting louder and louder as each name was called. The tributes were there, as were Donald Sutherland (President Snow), Woody Harrelson (Haymitch Abernathy). Liam Hemsworth (Gale Hawthorne), Josh Hutcherson (Peeta Mellark) and Jennifer were all met with deafening cheers.

I cheered, too, my arms covered with goosebumps.

Then the movie started, and I managed to recover from the surprise enough to enjoy the film. “The Hunger Games: Mockingjay, Part 2” was intense and action-packed, but also tender and done with much love. It made me laugh and cry. It was the fitting end to our journey in to Panem. 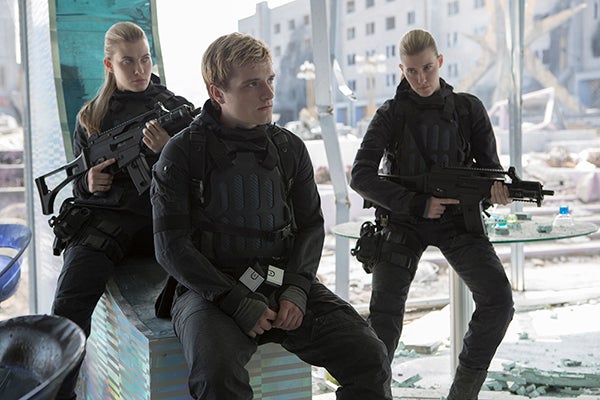 There was thunderous applause when the credits rolled. As we shuffled out of the theater, a girl joked, “After-party tickets! Ha! I wish!”

I joined the throng of people exiting and somehow ended up in the crowd that was headed for the after-party.

“Show your tickets, please!” Security men said. I had no tickets to the after-party but they waved me on.

Like Katniss deciding between Gale and Peeta, I had a choice to make.

If I turned right, I would be sneaking into the party.

But instead, I turned left, and set off in search of my Uber driver.

The odds turned out to be in my favor, but I didn’t want to push my luck.