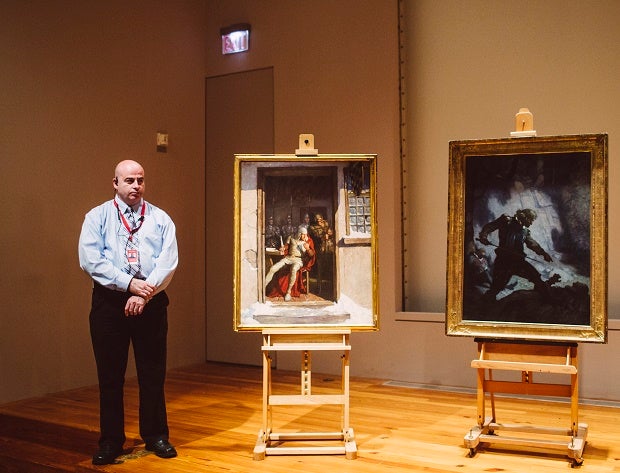 Portland Museum of Art security officer Shawn Higgins, left, stands next to two N.C. Wyeth paintings, "Go Dutton, and that right speedily," left, and "The Encounter on Freshwater Cliff" during the Press conference regarding the return of paintings to the museum, Thursday, Nov. 19, 2015, in Portland, Maine. The two paintings were recovered last month when a third party surrendered them to a retired FBI agent in the Boston area. WHITNEY HAYWARD/PORTLAND PRESS HERALD VIA AP

PORTLAND, Maine — A pair of stolen N.C. Wyeth paintings worth up to $500,000 apiece have been recovered and will be displayed in Maine along with four other stolen paintings recouped nearly a year ago in California, officials said Thursday.

The two paintings were recovered last month when a third party surrendered them to a retired FBI agent in the Boston area, Harold Shaw, special agent in charge of the bureau’s Boston field office, told reporters at the Portland Museum of Art, where the paintings were on display. No additional arrests have been made, and the investigation is continuing, he said.

All told, six Wyeth paintings were stolen in May 2013 from the home of a Portland businessman. Four of them were recovered by the FBI last December in Los Angeles, and three people were arrested at the time.

Celebrating the return of the remaining paintings, Portland police Chief Michael Sauschuck called it a “monumental day” for law enforcement, the art community and the collector who was reunited with valuable property.

“This is a big deal for the victim,” he said. “We’re certainly always happy to bring these pieces of property home to our victims. And I’ll tell you it’s a big deal if we’re returning a TV set, right? It’s a big deal to recover and return six paintings like this right here in the city of Portland.”

The FBI had announced a $20,000 reward for the two paintings after the other four were retrieved from a pawn shop in Beverly Hills, California.

Investigators said Thursday they now believe “The Encounter on Freshwater Cliff” and “Go Dutton, and that right speedily” never left New England. Police have not identified the man who turned them over on Oct. 9 and the FBI declined to say whether he is part of the investigation. The reward remains uncollected.

Two of the three men arrested in Los Angeles are behind bars.

The third, Dean Coroniti, also of North Hollywood, California, is expected to be sentenced next month after pleading guilty to possession of stolen property.

Wyeth, one of the nation’s greatest painters and illustrators, was patriarch of a family of artists including his son, the late Andrew Wyeth, creator of “Christina’s World,” and grandson Jamie Wyeth, also a painter. The family would spend most of the year in Chadds Ford, Pennsylvania, and summers on the Maine coast.

The six N.C. Wyeth paintings that were stolen will go on exhibition starting Saturday and running through the new year, said Mark Bessire, director of the Portland museum.

“The owner is incredibly relieved to have these irreplaceable works returned to his family,” he said. “Now that the ordeal is nearly over, he’s entrusted the museum to share them with the public.”