The new Coach is not your grandma’s tote | Inquirer Lifestyle ❮ ❯ 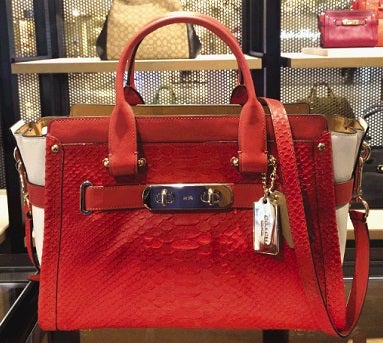 BAG du jour from the new collection, the Swagger 20 satchel, of exotic embossed leather with the logo stamped only on the hardware. Photo: Cheche V. Moral

The new Coach is not your grandma’s tote

COACH makes a major comeback in Manila after over a decade of absence, bringing with it a complete image transformation: Now it’s fashion-forward, New York-edgy, and has a lot less of the logos on your grandma’s tote from the outlet store.

“Luxury has turned on its head,” said Andrew Stanleick, Coach president and CEO for Southeast Asia and Oceania, at the official opening of the Coach boutique in Rustan’s Shangri-La. The brand’s local partner is Stores Specialists Inc.

“We still have our old consumers because we have relatively low pricing versus European brands. What our creative director, Stuart Vevers, has done is bring in new consumers who are confident in themselves, who don’t need the badge of a high-investment bag to show their status. This new consumer shops from different brands, and maybe Coach is one of the brands in her repertoire.”

The American brand, which turns 75 next year, began revamping its image 18 months ago, under its new CEO, Victor Luis. Luis hired Vevers, the British designer who has helmed Loewe and Mulberry, and has also worked at Calvin Klein, Louis Vuitton, Bottega Veneta and Givenchy.

Growth had stagnated as it faced new competition in the “accessible luxury” category. Some say Coach lost its cachet, that it had become just another outlet-store brand. And taste for luxury was changing: consumers now go for understated designs with less conspicuous logos.

“We were the innovators of accessible luxury. We had a huge market share globally,” Stanleick said. “We offered exceptional value in handmade products at a fraction of the price of the traditional luxury brands. When competitors saw this amazing business, they obviously tried to copy. So two years ago, we decided it was time to differentiate ourselves. Now this is our vision of modern luxury—fashion-forward, of high quality materials, handmade, but at an attractive and accessible price.”

Vevers’ job was to capture the New York spirit and energy of the brand. While customers may still find the odd monogram brand in the selection, the ad campaigns now focus on edgier styles with definitively more understated logos.

“We’re proud of our logo, and some will still be seeking that, and they will continue to be part of the range,” Stanleick said. “But majority of our customers are now seeking leather products with understated logos present.” Most of the handbags, which remain the core of the business, are made of leather.

Vevers also presented Coach’s first ready-to-wear collection at New York Fashion week in September. Footwear and apparel will be made available in Manila when it opens new and bigger stores next year, according to the regional CEO. The first store for now only carries handbags and accessories, like scarves and sunglasses.

The ad campaigns have also been focused on a younger customer, with one rollout featuring the dogs of celebrities like Lady Gaga, Ariana Grande and Miranda Kerr, shot by Steven Meisel, and another with young models like Lexi Boling and Fei Fei Sun clutching the season’s bags.

Store renovations have also been in the master plan, to transform current stores into “warmer, more luxurious” retail environments “inspired by its New York heritage.”

Even as it undergoes all the changes, Stanleick said Coach is “still the same price. We know our consumer is seeking value, and we want her to shop in a non-intimidating store. Coach is very democratic, very New York, very accessible.” It will also be offering monogramming and repair services here.

It has taken Coach a lot longer to get into Manila than its other Southeast Asian markets. But Stanleick feels its reentry here is primed, with the country’s buoyant economy and “people who love to shop and discover new brands.”

“Obviously, we need to address the issue of introducing the brand to Filipinos, especially to those who have only experienced us from their travels. We are the original house of American leather. We have a compelling story and a rich history, and next year, on our 75th anniversary, will be a great opportunity to tell that.”