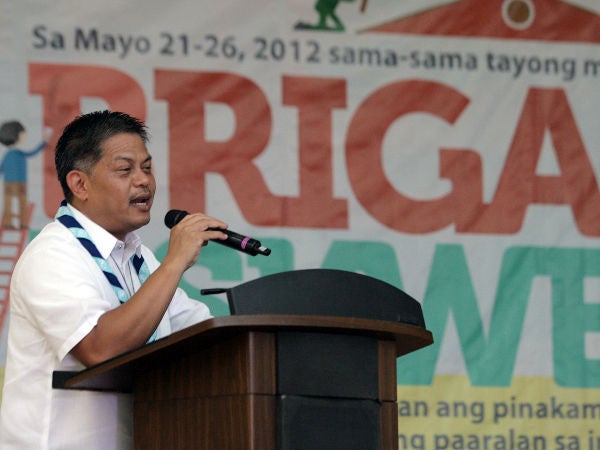 Luistro: Books give wings to imagination

Read and let your imagination fly.

The story of a seed that wanted to fly turned out to be the perfect story to read to young patients at Quirino Memorial Medical Center (QMMC) in Quezon City on Friday.

“The wings of our imagination can bring us to various places (even) while confined in the hospital,” Education Secretary Armin Luistro told patients at the pediatric ward of the hospital, as he wrapped up National Reading Month by reading them the story of “Lauan: The Seed that Wanted to Fly.”

Written by Rhandee Garlitos and illustrated by Hubert Balonso Fucio, “Lauan” is about a seed that was inspired by the flight of birds in Makiling forest. Eventually, the seed grew gliders which allowed it to be carried by the wind.

Friday’s event was part of the nationwide synchronized reading activity called “Araw ng Pagbasa,” and was held to coincide with the birth anniversary of the late Sen. Benigno “Ninoy” Aquino Jr., who also loved to read, Luistro said.

The storytelling activity at the hospital was significant as well since QMMC was named after Elpidio Quirino, a teacher who became President of the country, the education official added.

“It is our advocacy to make reading a part of Filipinos’ lives even outside school. We can set aside at least 30 minutes a day to read a book, a newspaper or a magazine to broaden our knowledge,” Luistro told reporters.

The Department of Education (DepEd) donated books to QMMC to encourage the habit of reading among patients.

Aside from hospitals, reading nooks can be set up in airports, hotel lobbies, and bus terminals, Luistro said, as he urged the public to donate books to schools or the DepEd central office as part of the Share-a-Book campaign.

The DepEd intends to put up library hubs so that even small schools can have access to books, the official added.

More than 40 book characters were paraded by Sophia School students, who also performed special song and dance numbers before a packed crowd at the elementary school’s covered court.

Lunch was provided by Sophia School students, parents and Cafe Nenzo, while prizes for the question-and-answer segments were donated by Metrobank Meycauayan-Malhacan branch and Flamebridge Publications.

The Inquirer previously held a read-along session on Nov. 6 and Nov. 7 at the Cultural Center of the Philippines (CCP) to celebrate Philippine Book Development Month.

This year’s festival, an annual event staged by the Inquirer every November, featured 30 well-loved Filipino tales for children read by over 30 readers, among them Inquirer president and CEO Sandy Prieto-Romualdez, British Ambassador to the Philippines Asif Ahmad, and read-along ambassadors Cathy Vital, Nash Aguas, Alexa Ilacad and Bianca Umali.

Close to a thousand children from Metro Manila and nearby areas trooped to the Silangan Hall of CCP to attend the six sessions of the two-day event, which also saw Edward Batac of School of St. Anthony named storytelling champion.

The many beautiful ways to tell a story