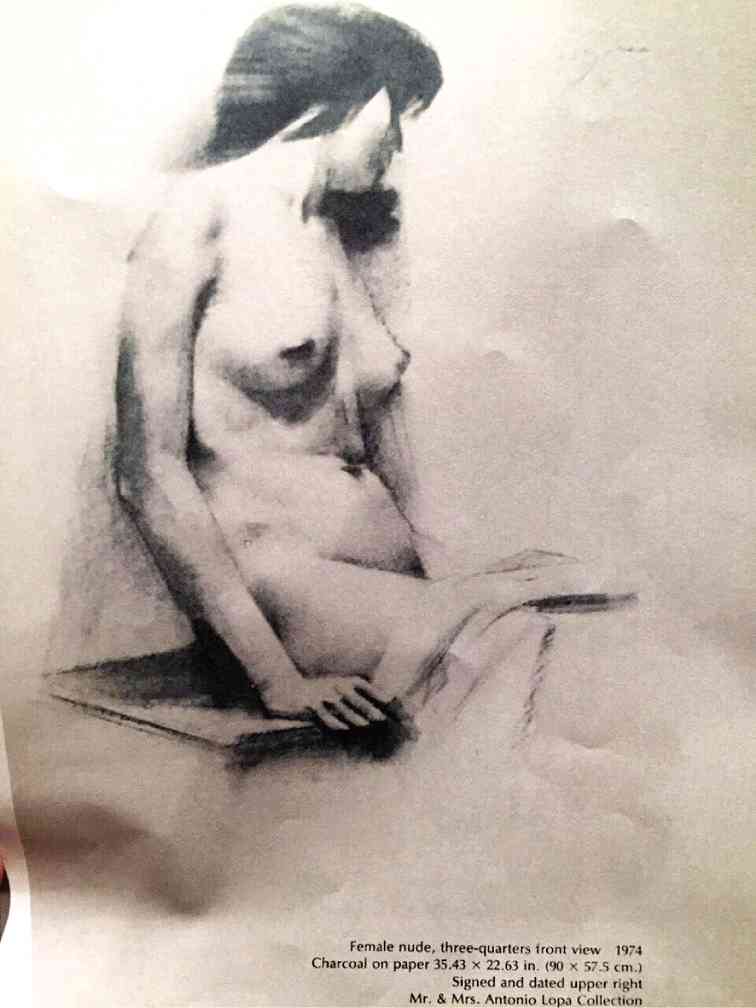 The “Manansala” painting showed to the nephew of art collector Mrs. C

Three fake Manansalas in one month—art forgers are getting bolder, more brazen

One quiet October morning, art connoisseur Mrs. C recalls, she was enjoying her daily morning coffee and checking her e-mails when she chanced upon a disturbing message.

It was a query from an amiga wondering whether a black-and-white charcoal painting of a nude woman being offered to another friend for a hefty price was indeed created by Vicente Manansala, a National Artist in the Visual Arts.

Attached to the e-mail was a photograph of the work—seemingly encased in a glass-covered frame—that had an unclothed woman seen from her backside, her head tilting slightly to the left, and her hair tied in a loose bun.

“This looks familiar,” thought Mrs. C, who requested to keep her identity vague for security reasons. “Then I jumped out of my shoes. Why, the painting or whatever you call it is hanging in my den! I rushed to the den and saw the original that is still on my wall!”

“Nanlamig talaga ako (I got goosebumps)!” she exclaimed. “This is really shocking! How can a painting hanging in my den be offered around for sale?”

Mrs. C is not your ordinary art collector. She had been friends with Manansala and his wife Herminigilda. Until the artist’s death in 1981, Mrs. C was a frequent visitor at Manansala’s atelier in bucolic Rizal province, hobnobbing with other enthusiasts who were also fans of the artist fondly called Mang Enteng.

Such is Mrs. C’s familiarity with his works that there are galleries that solicit her opinion whenever a supposed Manansala painting is offered to them for sale.

The e-mailed photo was not the end of Mrs. C’s nightmare. Days later, her daughter-in-law called to say that she has a friend who was anxious about the authenticity of a Manansala nude that he already bought. The friend wanted to show the painting to Mrs. C.

Earlier this month, Mrs. C got wind of a third “Manansala.”

A nephew’s friend was offered a black-and-white painting, this time with the subject in quarter-profile, her head turned away from the viewer. Mrs. C said the seller left the painting in the home of the nephew’s friend. The move raised suspicion, instead of encouraging a sale.

“They (prospective buyers) started to doubt (the authenticity of the painting) because the seller did not think twice about leaving the painting with them just like that,” she noted.

“The buyers thought, ‘You don’t do that to a Manansala. You guard it with your life.’ That’s when they remembered my nephew… and decided to check with him if I was really selling the painting,” the collector added.

“This seller is really bold to give my name as the owner,” Mrs. C fumed. “He did not realize that the buyer knew my nephew…”

Understandably, Mrs. C is reeling from this string of events: “This is too much! Within a month we came across three fake paintings. This is alarming.”

Mrs. C is not the first Manansala collector whose paintings have been copied and passed off as genuine works of Mang Enteng. More than three years ago, Christie’s Hong Kong was nearly duped into selling a purported Manansala oil on canvas measuring 24 x 35 3/4 inches called “Bird Seller.”

Fortunately, art patrons in Manila raised a red flag before the piece was auctioned off. They pointed out that the painting was eerily similar to “Birdman,” an oeuvre owned by Judy Araneta Roxas that Manansala finished in 1973.

“Mang Enteng repeats a subject matter, but he never duplicates a painting,” Mrs. C pointed out.

Mrs. C is familiar with the Birdman/Bird Seller case. She also knows the members of an elite group of Mang Enteng’s fans called Friends of Manansala who were outraged by such acts. The group was formed in 1981, soon after the artist succumbed to cancer, specifically to guard against efforts to forge his works and to honor his legacy. Roxas, owner of “Birdman,” is one of its most prominent members.

Mrs. C theorizes that those who forged “Birdman” and her Manansala nudes copied from photos found in coffee table books about Manansala’s works.

Mrs. C has two of these books. During this interview, she showed photographs of “Birdman” and one of the charcoal nudes that inspired the forger/s.

She suspects the third forgery might have been copied from the photo of a nude painting that appeared in a local men’s magazine that featured Mang Enteng and Friends of Manasala a few months ago.

Mrs. C said these were not her first encounters with fake Manansalas. Some years back, a guest went to her residence lugging along a “Manansala” that featured women chatting, an image lifted from the National Artist’s “Pila Sa Bigas” theme.

“The guest bought it for P3.5 million,” Mrs. C recounted. “His face fell when I said I have never seen a Manansala painting like that.”

Another time, a man arrived with another “Manansala.” He did not buy it, but was offered by someone who owed him a huge amount of cash as payment for the debt.

When Mrs. C expressed doubts on whether the painting was genuine, the man cursed and shouted, “Lolokohin pa ako!”

“I am just a collector,” she clarified. “I would not say (categorically) that a painting is a fake (to a buyer’s face). Sometimes I would point out that the (forger) missed out on a detail. I spot it but I cannot reveal what it is.”

She added: “Sometimes I would show the one making a query that a painting that is similar to what he bought. I let them conclude what they think about the painting they bought.”

Mrs. C then mentioned a recurring story among those fooled into buying a “Manansala nude”—that someone who claims to have worked as a model in a nude session for Mang Enteng is the one selling the forgeries.

“People fall for that story,” said Mrs. C. “She claims Mang Enteng gave the painting to her as a gift. I really hope we can expose this to protect unsuspecting buyers.”

She and other art collectors complained that Republic Act No. 9105, the law providing penalties for “the crime of art forgery” that also institutionalizes the “mechanism for art authentication” and provides funds for this effort, has done little to prosecute art forgers and swindlers.

“Walang teeth ang law!” she said. “We have to lobby for stronger legislation. Art enthusiasts will definitely support such a move.”

Inquirer Lifestyle in 2001, when a Makati mall displayed supposedly “never-before-seen” works of the late Hernando R. Ocampo, another National Artist in the Visual Arts.

A close friend of the artist blurted out how Ocampo “is even more prolific now that he is dead than when he was alive!”

Mrs. C said that one setback is the refusal of collectors to complain against sellers once they discover that the paintings they had bought are fake. In most instances, a seller would quietly return the cash paid for the painting. This practice, Mrs. C pointed out, spares the collector from the embarrassment of being duped.

“Natatakot din ang vendor ng fake of being found out, so the vendor returns the payment,” said Mrs. C.

She recounted that after Christie’s Hong Kong learned that “Bird Seller” was not a real Manansala, “it returned the painting to the (Manila-based) seller who would not disclose its origins. So that painting could be offered to another gullible buyer in the future.”

This possibility is not lost on other collectors.

Sen. Loren Legarda, a staunch defender of Philippine art and culture, acknowledged the concerns faced by art collectors. In a solicited statement, Legarda noted that RA No. 9105 tasks the National Museum to “implement measures to protect against art forgeries.”

Meanwhile, an art authentication panel composed of three members “with known expertise in art conservation, connoisseurship, art history or visual arts” must be chosen by the National Museum Board of Trustees to “verify and certify as original any work of fine art submitted to it for authentication.”

This panel is also allowed by law to “initiate an investigation and recommend the prosecution of all persons who may have violated” any provision of the Republic Act.

Barns cited “lack of organizational capacity” as the “biggest constraint” that is holding back the museum from fully implementing the requirement.

“What they need are the actual people who will be dedicated towards doing all the registration, analysis and legal work,” said Legarda. “This is already incorporated in the reorganization plan submitted by the National Museum to the Department of Budget and Management.”

The senator added that while the law “is very detailed… the main challenge is the lack of experts who will compose the authentication panel.”

Legarda noted that another law, the National Cultural Heritage Act of 2009, names the Philippine Registry of Cultural Property as the repository of “all cultural properties deemed important to the country’s cultural heritage.”

All works by a Manlilikha ng Bayan (National Living Treasure) or by an Alagad ng Sining (National Artist) are also required to be registered.

At present, many collectors who purchase works of artists no longer living have to make do with testimonies from the spouse or children in ensuring that the paintings they are eyeing are indeed authentic. Trouble is, certificates of authenticity can sometimes be issued indiscriminately. Worse, there are living relatives who are allegedly in cahoots with forgers.

“There are those who issued certificates of authenticity for a fee!” said Mrs. C.

A piece of advice commonly given by experts is for a would-be collector to familiarize himself with an artist’s work by visiting museums that feature these, or getting the opinion of respected galleries.

Mrs. C and other collectors are waiting for the day when the law against art forgeries is strengthened.

“Until then, puro salita,” she lamented. “Nakakalusot ang forgers. Walang sumisita. The ‘Birdman’ experience indicates the vibrancy in the art community. There are collectors who want to own a Manansala. Unfortunately, the forgers are having it so good.”