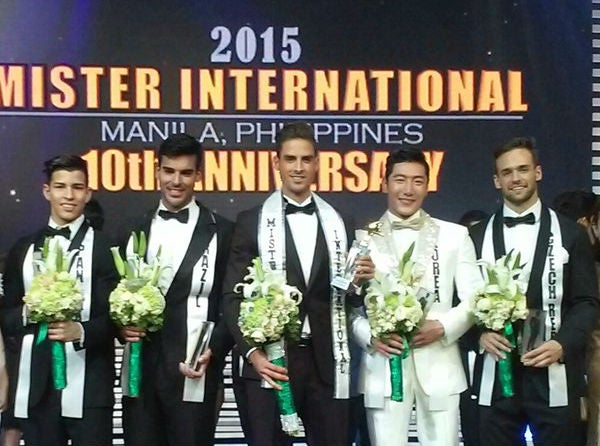 Switzerland’s Pedro Mendes bested 35 other representatives from different parts of the world for the 2015 Mister International title after a three-hour spectacle at Resorts World Manila’s Newport Performing Arts Theater in Pasay City on Monday night.

Mendes received his title from the Philippines’ “hot cop” Neil Perez, who won the tilt’s 2014 edition in South Korea.

Panama’s Julian Torres placed fourth, while Jakub Kraus from the Czech Republic rounded out the Top 5.

The Philippines’ Reniel Villareal placed in the Top 10 and received the Best in National Costume award.

Mexico’s Alejandro Ruiz, who also finished in the Top 15, was proclaimed Mister Photogenic. Singapore’s Edwin Aw was voted by his fellow delegates as Mister Congeniality.

The others who placed in the Top 10 were the representatives from Venezuela, Australia, Puerto Rico and Indonesia.

The delegates from Sweden, Lebanon, China, and Spain also finished in the Top 15.

This is the first time for the Philippines to host the international contest, which staged its 10th edition this year.

The Philippine Daily Inquirer is a media partner of the competition.