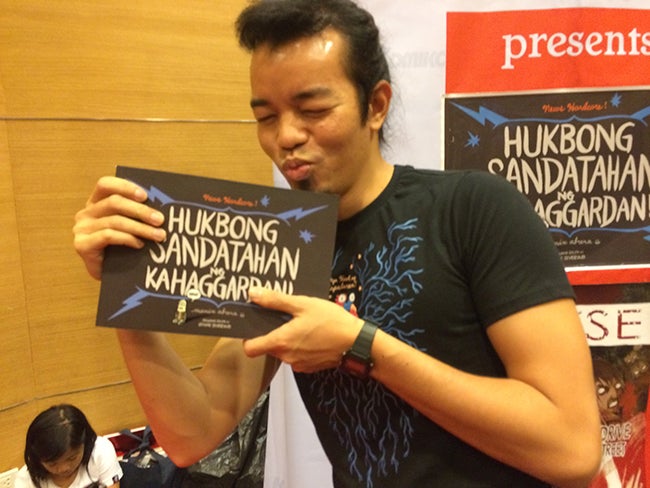 How important is the Komikon? Filipino comic creators slave all year to be able to get something new ready in time for the November event, an annual rite since the first one in 2005. It’s seen a lot of changes through years, including the venue switching from its original spot at the University of the Philippines (UP) Bahay ng Alumni to the current place, the Bayanhihan Center in Mandaluyong.

But the big Komikon reboot came this year, when the biggest event in Philippine comics expanded from one day to two, running from Nov. 14 to 15. Komikon committee member Ariel Atienza explained that the organizers had been receiving feedback that people were missing what had been a Saturday even because of work or   other commitments for years. “So as an experiment, we thought, why not make it two days and see how it works out?”

Welcome to Komikon 2015: the 11th Annual Philippine Komiks Convention. A cursory evaluation of the crowds over the two days indicates a distinct positive development. The aisles were packed. “The moment we arrived, we could see the long lines,” Atienza said. “It was surprising and we were very happy that the turnout of the crowd the second day was the same as the first day.”

The biggest debut at this year’s Komikon was clearly Manix Abrera’s “News Hardcore! Hukbong Sandatahan ng Kahaggardan!,” a collection of Abrera’s journalism-oriented strips from the GMA News Online site and published by Visprint. Fans lined up throughout both days to get Abrera to sign their books; Abrera dutifully kept signing from the Markosia Comicson’s start to end.

It took David and Malonzo one year to finish this volume. “We went through so much to get this out,” Malonzo said in Filipino. “We made a big commitment of 10 years to produce the ultimate comic adaptation of Rizal’s ‘Noli’ and ‘Fili.’” Aiming for more than 12 volumes, the team plans to have the next volume ready for the next Komikon.

A lot of new work was made available at Komikon, such as The Yellow Couch’s “Crunch Time Komiks Vol. 1.” JV Tanjuatco was handing out ashcan editions of Comic Book Lab’s “Mythopolis” series. The folks at the Meganon Comics table were pitching their new coloring book, available with two different covers.

But just as there were many bright new things found for the first time at Komikon, there were also fascinating returns.

One eventful second coming was that of the “Trese” series, now made available in Filipino and color, in single-issue form. “Trese Komiks Isyu 1: Sa Kanto ng Balete Drive at 13th Street” was thus both a callback to its original format and an evolution as well.

“Trese” had one case previously translated into Filipino as part of the Department of Education’s new list of supplemental material. “In the past two years, we’ve received e-mail from students and met new readers at Komikon who said that they first time they read ‘Trese’ was because of it was a school assignment,” Tan explained. “So, I thought that maybe we should translate the rest of the ‘Trese’ stories into Filipino, which will hopefully allow us to find new readers who’ve never picked up the book.”

This was a meaningful undertaking in 2015, the 10th anniversary of the series, and Visprint brought in a heavy hitter to do the translation, the pseudonymous best-selling author Bob Ong. Working in this new format made the team members feel like they were working on a new story. “We’d love to be able to do this for all the ‘Trese’ books,” Tan said.

An interesting second coming was that of “Starburn,” a series from UK-based Markosia Comics. A sci-fi story from Singapore-based Canadian writer Kelly Bender, “Starburn” has a Filipino illustrator in Brian Balondo.

Balondo admitted he was very nervous when he started.

“But then, it became fun,” he said. Bender and Balondo had attended last year’s Komikon with “Starburn” # 1 and now they returned with a collected edition of “Starburn” # 1-4. “I’d love to come back,” Bender said. “I’ve done four different cons in Asia, and this is by far my favorite one.”

Jesie Castro also introduced his graphic novel “Overheard at U.P. Illustrated Stories Vol. 1” at last year’s Komikon, but came back this year with a larger print run because there were requests for it. Eikon Comics’ Rick Olivares had two books last year; this year, he was showing off five new titles. There were many welcome second issues from newly-started series from the cons that happened earlier this year.

The back issue bins were busy this year. National Book Store had a handsome line-up of graphic novels available, while Comic Odyssey was selling hardcovers at as much as 80 percent off in some cases. Komikon 2015 featured panels, screenings, contests and an indie komiks tiangge.

Atienza said Komikon has come quite far, as they have gone from 36 exhibitors in 2005 to over 200 in 2015; they’ve even reached the limit for the venue’s capacity. Will next year’s Komikon be as big (and as long) as this one? “We can’t say for sure yet if it’ll be two days again next year, because the preparations is also twice the work,” he said. “But maybe if the turnout will be the same, it’ll be worth it.”