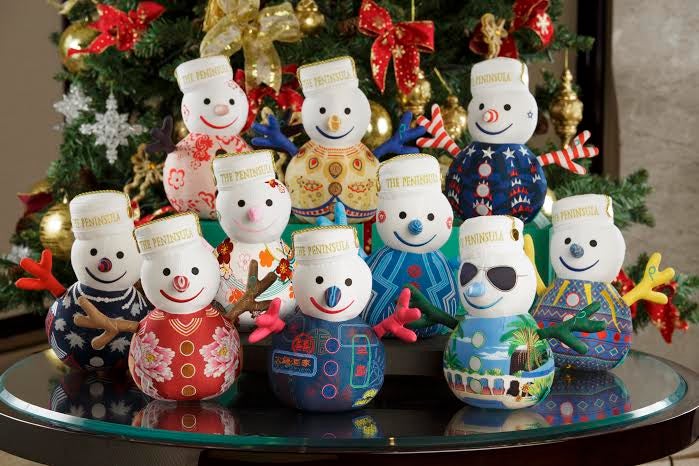 Snowpage is being sold in 10 Peninsula hotels around the world. Each hotel has a distinctive-looking stuffed toy that depicts the culture of the city where the hotel is located.

Dev Suj, the man behind a brand of upscale collectible toys called Papinee, was in Manila to oversee the launch of his latest product. It’s a stuffed toy that so happens to be the mascot of one of the world’s grandest chain of hotels. The name of this handmade, limited-edition toy is “SnowPage,” and it’s been tasked to serve as the cuddly Christmas ambassador of The Peninsula Hotels.

The toy doesn’t come cheap, but it’s being sold for a good cause. Funds raised from the sale of SnowPage stuffed toys will benefit Suj’s favorite charities. These include foundations and nongovernment organizations devoted to uplifting the plight of underprivileged children. The Peninsula Manila, for instance, would be channeling the proceeds to the Make-a-Wish Foundation.

The fundraising project was the result of a tragedy that Suj had witnessed. He said it permanently changed the way he looks at the world. Although he traces his family roots to India, Suj was born and raised in England and lived a highly privileged life. “I come from a family of artists,” he said. “We designed watches, jewelry and we lived a life of luxury.”

As a child, he also lived in a world of wonder, most of which was created by his mother, Shobha Suj, whom he described as a dazzling raconteur of children’s stories. Her talent for vivid storytelling, coupled with her enormous passion for the arts, helped her children unlock their own imagination.

“The way she told the stories made us feel we were right in the middle of what was happening in the story,” Dev Suj recalled. “Our living room would transform into the pyramids of Giza, or into King Arthur’s castle.”

But an incident would force him lose his innocence. “I got caught in the middle of a war in the Middle East,” he recounted. “I don’t want to go into the specifics of that ordeal because it was very traumatic for me. Not that I got hurt or anything, but I witnessed so much suffering, children who suddenly became orphans with nothing to eat and no place to rest. It was so terrible and it felt very hard for me to continue the way I live, knowing there is much suffering in the world.”

At that point, he decided to follow in the footsteps of his mother, focusing on philanthropy. He established Papinee, a luxury toy-making company with “a social mission to give the world the gift of imagination.” In a way, it would recreate the magnificent world his mother had made for her children. “And the name Papinee was a word my mother invented,” he said. “It was her way of describing fun times and anything magical. She also used it as a term of endearment to her children. She called each one of us her ‘papinee.’”

An artist himself, Suj is creative director of Papinee and takes charge in the making of the toys and children’s books. He has aligned with several foundations that focus on advocacy for children, with various projects such as training and providing funding for storytellers who reach out to children confined in orphanages and hospital wards.

The collaboration with Peninsula hotels is yet another of Papinee’s social missions. This month, SnowPage will be sold in 10 Peninsula hotels around the world. And depending on its location, the toy will sport a distinctive look that reflects the culture of a specific city.

The Peninsula Manila’s version of SnowPage is adorned with indigenous tribal colors—red, blue and yellow. The latter color pays homage to the sunburst sculpture ensconced at the hotel’s lobby.

As a point of comparison, The Peninsula Beverly Hills’ SnowPage will be wearing sunglasses to symbolize Hollywood.

Suj’s connection with the Peninsula actually began when he was a child. He was like the hotel’s version of Eloise, the precocious little storybook heroine who grew up in New York’s Plaza Hotel. “But we didn’t live at the Peninsula,” he clarified, laughing. “But when I was a child my family would often have dinner or hold parties at the Peninsula in London. Hong Kong was our second home and we often visited and dined at the Hong Kong Peninsula. That place, like any other Peninsula hotel, is more than just a hotel. It’s a destination.”

He recalled his first trip to Manila when he was in college. “That was in 1995. My college friends and I stayed at the Manila Peninsula. We all studied in the same university in Boston and one of our pals was from the Philippines. So, when we were here, she toured us around Manila and to Pagsanjan Falls. Today, 20 years later, I’m back in Manila for just the second time…”

He admitted that SnowPage is as pricey as a toy can get, but it’s more than just a luxury item for children. “A Papinee toy is an heirloom that can be passed on to future generations,” he noted. “SnowPage is going to be a rare toy since only 300 pieces will be sold in each Peninsula hotel. And it comes with a few extras. Some of the boxes of SnowPage will contain a Golden Ticket, which entitles one to win prizes courtesy of the hotel. The grand prize is a two-night stay at the hotel.”

The Golden Ticket, he explained, was inspired by the plot of one of his favorite children’s books, “Charlie and the Chocolate Factory.” He said he still enjoys the stories of Willy Wonka and also Mary Poppins. “Every child in this world should get to enjoy those stories,” he pointed out.

Rest assured that when one purchases a limited-edition SnowPage stuffed toy, the buyer helps a child to experience some of the things other people enjoyed as children. Or as Dev Suj said, it offers a chance for a child to take pleasure in having that “priceless gift of imagination.”