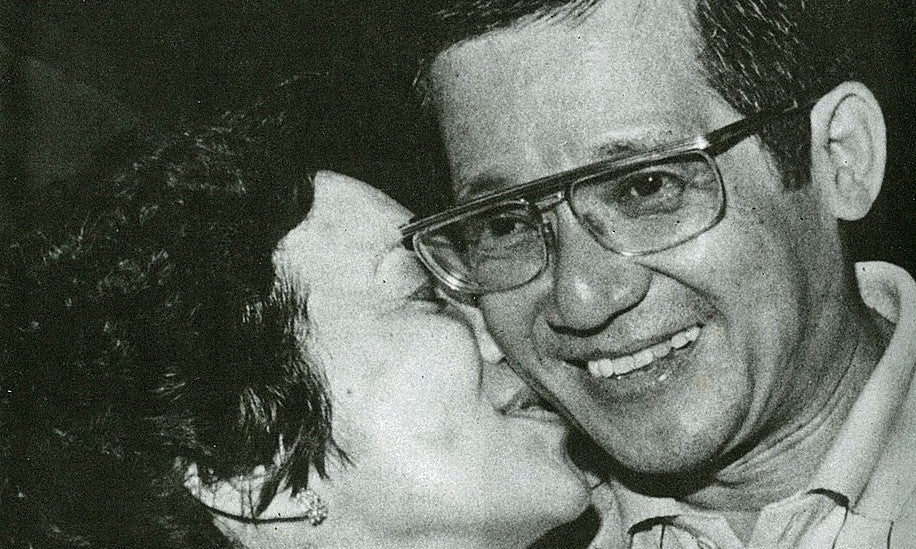 ROME—At least he has his parents’ love story to fall back on.

President Benigno Aquino III on Thursday compared his parents’ love story to the difficult quest for the country’s next President.

Mr. Aquino told a crowd of more than 500 Filipinos living and working in Italy that finding the next President was similar to finding one’s perfect match—much like his own parents did, he added, referring to democracy icons former Sen. Benigno Aquino Jr. and former President Corazon Aquino.

“The relationship of my parents (was) not unlike the relationship of a President to his bosses. We are looking for a match: a match of the heart, a match of dreams, the right match for a leader who will put you first, and you’d be ready to do your share so that we can reach our collective goals,” the Chief Executive said.

The 55-year-old bachelor President told his laughing audience “a story about courtship,” even when, he said, he hasn’t really been successful with his own love life.

“That’s why what I am about to share isn’t about my own love life but (that of) my parents,” he added.

Mr. Aquino recalled that during one of their jail visits to his father, who was then detained by martial law President Ferdinand Marcos, one of his older sisters had asked their father how he became certain that their mother was the one for him.

“My father answered, his face serious, that when they were young, my mother saw him at a children’s party and pointed him out to my grandfather. His fate was sealed,” his father had thought.

“My sisters went ‘ooohhh…’ A week later, my father remembered the man who was his rival for my mother’s heart. My father praised the man, especially (since) he was a good dancer. He could dance on the floor, on the chair, on the table, under the table. He really praised the man for his ability to dance. The man, however, looked like a lizard,” Mr. Aquino recounted, drawing laughter anew from his audience.

The President said he was surprised that his father had mentioned the story of his rival, even after years of marriage to his mother. Did he remember the time he was jealous of his rival? Mr. Aquino wondered aloud.

“Now, even as I laugh at the memory, the great love of my mother and father for each other (left) a mark on me. They were the perfect match. They even reached a point when they thought (alike) even without talking to each other. They had the same answer when I’d ask permission to go out,” the President said.

“When that happens, and if the leader’s heart is in the right place, he will fight for you and he will go against anyone who will oppress you because you give him strength. Because he knows (that) whatever happens, you are behind him,” the President said.

“And like my father and mother, whatever a country achieves is because of the cooperation, trust, and unity of the leader and the public he serves,” Mr. Aquino said.

His parents always told him it was their love for each other that helped them reach their goals, Mr. Aquino said, adding that even if he was a bachelor, he was considered “the father of our country.” “Could they allow him now to impart lessons to his children?,” the President asked.

Leni Robredo as the ‘second coming’ of Cory Aquino