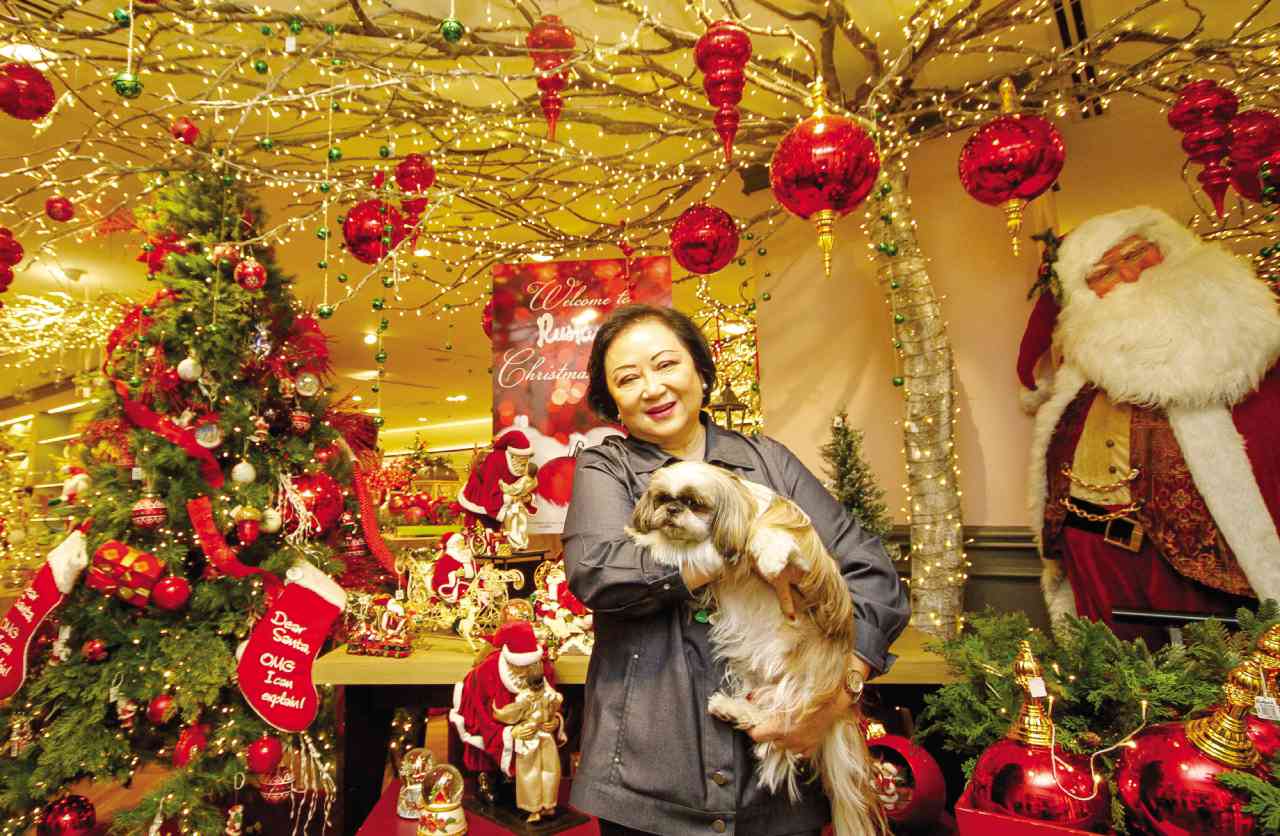 NEDY Tantoco, with Sabrina, in a happy Christmas corner at Rustan’s

Nedy Tantoco knows what you want for Christmas

Trailed by her well-behaved shih tzu Sabrina, Tantoco, chair and CEO of Rustans Commercial Corp., expressed optimism about consumer spending during the holiday season, and the crowd—sizable for a middle of the week—confirmed it.

“Christmas is Christmas,” says Tantoco. “Everybody wants the feeling of Christmas to dominate their homes and get-togethers.”

Because Filipinos celebrate Christmas longer than anyone else in the world, Rustan’s stocks its home section with tasteful holiday decor as early as October. Even then, the items simply fly off the shelves.

“Our store operations vice president just told me we ran out of Christmas trees!” exclaims Tantoco. “I had to call merchandising to have them deliver new stocks immediately in time for the weekend.”

“We’re known for our Christmas décor,” says the Rustan’s president. “That’s how we try to enhance the shopping experience.”

As to what sort of presents people are spending on, toys, naturally, are a top pick. “We just opened our Lego corner,” Tantoco says, “and it’s super, fantastic.”

Jewelry, to her surprise, has apparently become a popular gift to give (and receive) during Christmas. High-end brands like Tiffany & Co.’s are selling quite well, as are labels that offer refined, midrange-priced pieces, like Roberto Coin and John Hardy.

For the hard-to-gift man, a bespoke suit or shirts from Ascot Chang or colorful apparel from London luxury clothing brand Thomas Pink will have recipients remembering you for years to come.

To add to their specialness and exclusivity, gifts are wrapped in the signature Rustan’s Christmas wrapping paper and ribbon, which comes in select colors. This year, shoppers have an equally attractive option: Presents are swathed in Japanese paper before they’re placed inside a Rustan’s shopping bag with a ribbon and card. “People like this option if they’re in a hurry,” says Tantoco.

Keeping with the times

Indeed, even with the sprouting of mammoth-sized malls everywhere, notable growth has been seen in branches like Rustan’s Alabang (“where young families live,” says Tantoco) and Cebu (“where the growth is tremendous”).

And though its core customer remains the older, spending market, Rustan’s also recognizes and values the needs of today’s selfie-obsessed generation.

Its Gateway branch is a perfect case in point. Set for relaunch in February 2016, the department store, now double in size, assigned its youth-oriented section to the ground floor, where cosmetics are typically found.

“That’s because we noticed so many students passing to and fro because of the MRT,” explains Tantoco. The president also bared plans to “create a mall ambiance” in their department stores by setting up sections and enticing impressionable shoppers with eateries and outlets selling gadgets.

“We have to know our customer,” she says. “Unlike their mothers or grandmothers, young people don’t like to shop in department stores, they like to shop in malls. They also always like new things!”

According to Tantoco, the fashion department facelift will be the result of a methodology recommended by a sought-after international consultant.

“We have not really remodeled our fashion floor for quite a while, so you’ll see changes in our adjacencies, layout, men’s and women’s merchandise,” says Tantoco, who smiles when she catches herself divulging too much. “It’s a new and exciting concept,” she says finally. “You will see!”