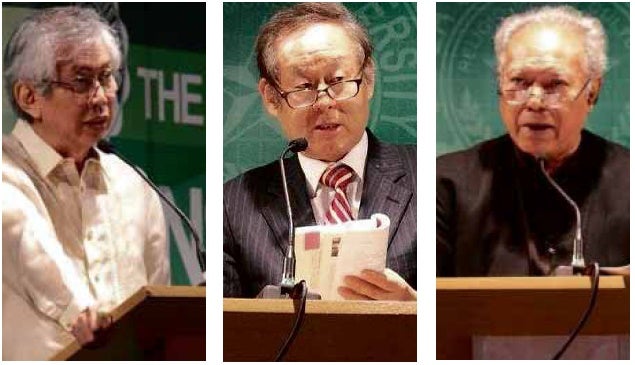 THE RELATIONSHIPS between literature, politics, the creative imagination, national elections, history, globalization and other related issues came to the fore during the recent 58th national conference of the Philippine Center for International PEN (Poets, Playwrights, Essayists and Novelists), which is based in London.

The theme of the conference was: “The PEN and the Future of Philippine Democracy: The Filipino Writer Defines the Issues at Stake in the 2016 Elections.”

Speaking in Filipino, Lacaba, who was arrested and tortured in 1974 by the attack dogs of the dictator Ferdinand Marcos said he owed a debt of gratitude to PEN for helping in his release. It has been a difficult year for journalists, he said, and there is need to fight for the rights of writers and journalists.

Lacaba sharply criticized the “national amnesia” which had resulted in the Marcoses being back in power.

The First Literary Session focused on “The Filipino Writer in the National Elections.”

Elmer Ordoñez narrated “a parable” about one Juan Esscribo who dreamt of writing the Great Filipino Novel but ended up being a paid hack of politicians. He warned young writers not to fall into the same trap.

For the Iligan City-based Christine Godinez-Ortega, the scene shifted to Mindanao where, she said, writers are well aware of corrupt politicians “and know what’s going on.”

She declared: “The job of the writer is to tell the truth, no matter what, especially during election time.”

Jun Cruz Reyes satirized speechwriters from the President down, saying “they only think up of issues to promote their patrons.”

The Second Literary Session was “On Political Discourse and the Creative Imagination.”

Frank Peñones Jr. recounted how poetry in the Bicol language was able to stop a controversial dam project of Dato Arroyo, son of former President Arroyo. Dato had used social media and Bicol poetry to gain support for the dam, leading to a counter-movement, also in poetry, which succeeded in stopping the project.

For Rody Vera, writing was a commitment, a responsibility, and “political writing, political theater is universal.”

Gary Devilles opined that writers who participated on the political scene must use their imagination: “Democracy stands as a mere political system, it can change. We can imagine and reimagine reality [in the service] of the future of democracy.”

The Third Literary Session had “The Filipino Writer as Public Servant” for its theme.

Citing a play about social injustice, with a marginalized fisherman as victim, Malou Jacob said: “The artist should be a defender of human rights. All have human rights violations, whether Christians or Muslims.”

Lila Ramos-Shahani said she had “many, many questions” about the legacy of former President Fidel V. Ramos, her uncle. When she finally broke her silence, it was respectful. But she asked: Why did this happen?

“It’s very difficult to be a writer and a public servant at the same time,” she added.

Alejandrino Vicente, who was ambassador to Libya when Gadhafi fell, said that “a public servant should always be accessible to the people and serve them well.”

As a model of the writer as public servant, he cited Epifanio de los Santos (after whom Edsa was named) along with Claro M. Recto, Leon Ma. Guerrero and Blas Ople.

As for electing a new President, he said: “we never seem to learn the right choices.”

Panelist Luis Gatmaitan, a physician, author of children’s books and proponent of health projects, was asked, because of his advocacies, if he was running for office.

“Not just tablets and capsules can cure,” he shared. “Writing can also cure.”

The Third Literary Session was about “The Writer and Globalization.” Poet Lee Gil-won of the Korean PEN said “the Philippines is a major country in Asia with a strong economy, and the Philippine PEN should be more active on the international scene. Someone asked, why is the Nobel Prize always given to Western writers? We have a right to globalize literature.”

Romantic novelist Mina Esguerra reported that there were now millions around the world who read romance stories, considering there were now overseas Filipino workers everywhere: “The market for romance novels is truly global and a lot of work.”

The José Rizal Lecture was delivered by Singapore’s poet laureate Edwin Thumboo, who might well have Rizal in mind when he declared that “you can kill a person but not an idea. In fact, the idea becomes stronger.”

“So much activity, so much going on,” he said. “The money is there. Once you succeed, your problems change…”

Success came with a price.

As for Singapore’s lack of press freedom, Thumboo noted, it will take time to remove the restrictions. But he concluded that “writers are the soul of a nation.”

José declared that “freedom is not absolute, you have to struggle and fight for it all your life.”

Lumbera observed that Filipinos had had only a brief experience with real democracy: “We must now take a look at the kind of democracy Filipinos have. Sana dumating ang pananaw ng umaga [may the morrow bring true democracy].”

DLSU vice-chancellor Raymond Gerard Tan articulated what every writer consciously or unconsciously desired when he declared: “National consciousness must be shaped, and it is the writers who can best do this. As we approach the national elections, we must face the challenge of coming events.”