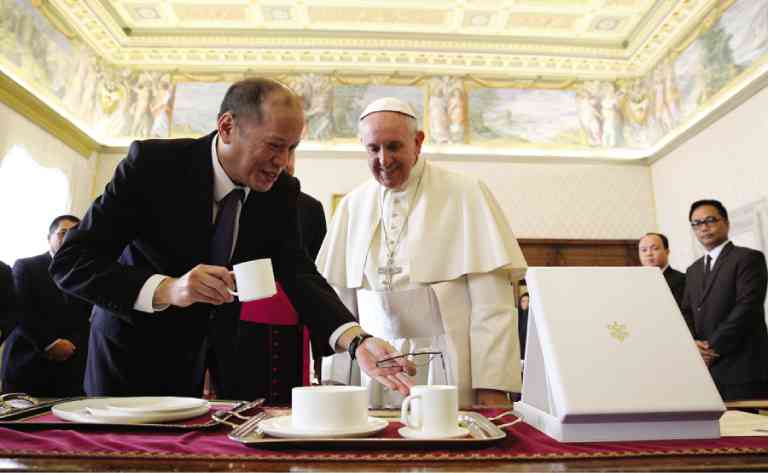 PRESIDENT Aquino’s gift of the dinnerware set to Pope Francis is a reminder of Filipino hospitality. JOSEPH VIDAL

The story behind President Aquino’s gift to the Pope

He again created a buzz when Pope Francis was photographed admiring the Ito Kish dinnerware set given by President Benigno Aquino III during his visit to the Vatican last week.

The Kristina Bukid dinner set, with its understated elegance and folksy image of the nipa hut under coconut trees, must have reminded the Pope of the Filipino warmth and hospitality he experienced during his own visit last January.

For Kish and his eponymous brand, a narrative is always woven into the design. He tries to capture the Filipino experience and merge it with a global modern aesthetic. His products cater to culture-oriented people who appreciate good design and workmanship. They also appreciate the visual storytelling given a fun touch.

Kris Aquino is Kish’s client; she has sought his advice a few times on decorating her living spaces.

Invited to her condominium one day, he chanced upon her cooking and was charmed by her casual getup—no makeup—in the homey, informal setting. It was a refreshing contrast to the glammed up and powerful public persona.

The early dinnerware design was a toile de jouy (pronounced twal duh zhwee), or a scenic pattern printed on a light background. It was adorned with pen-and-ink images of the bukid or farm life—a bahay-kubo, sampaguita, native birds and a carabao, executed by Kish’s former assistant Miel Cabanes.

During the Manila Fame fair in October 2014, Kish launched his eponymous dinnerware collections for the export market. Bukid became the most popular. These fine bone china pieces were handcrafted by a supplier from Laguna.

The Baluster line featured classic spindles found in staircases, and Mangan (which means eat) depicted a fork and a spoon and Filipino food such as adobo.

Susan Reyes, the President’s social secretary, was impressed with the collection and gave it a thought.

For the Apec Summit, Kish received a special order from Malacañang for a set of eight cups and saucers with the Bukid design.

Kish expanded the Bukid into a 28-piece dinner set for four people, consisting of dinner plates, salad plates, dessert plates, and bowls, plates for the bowls and the cups and saucers.

His china got so much hype that it immediately sold out.

He held on to the last Bukid dinner set, intending it for the archives. However, when Malacañang ordered the last set to give to Pope Francis, Kish was more than glad to turn it over. The dinner set was wrapped in recycled paper, inscribed with the whimsical images of the bukid.

“Our first edition has gone to the Pope,” Kish said. “I hope it’s my passport to heaven.”