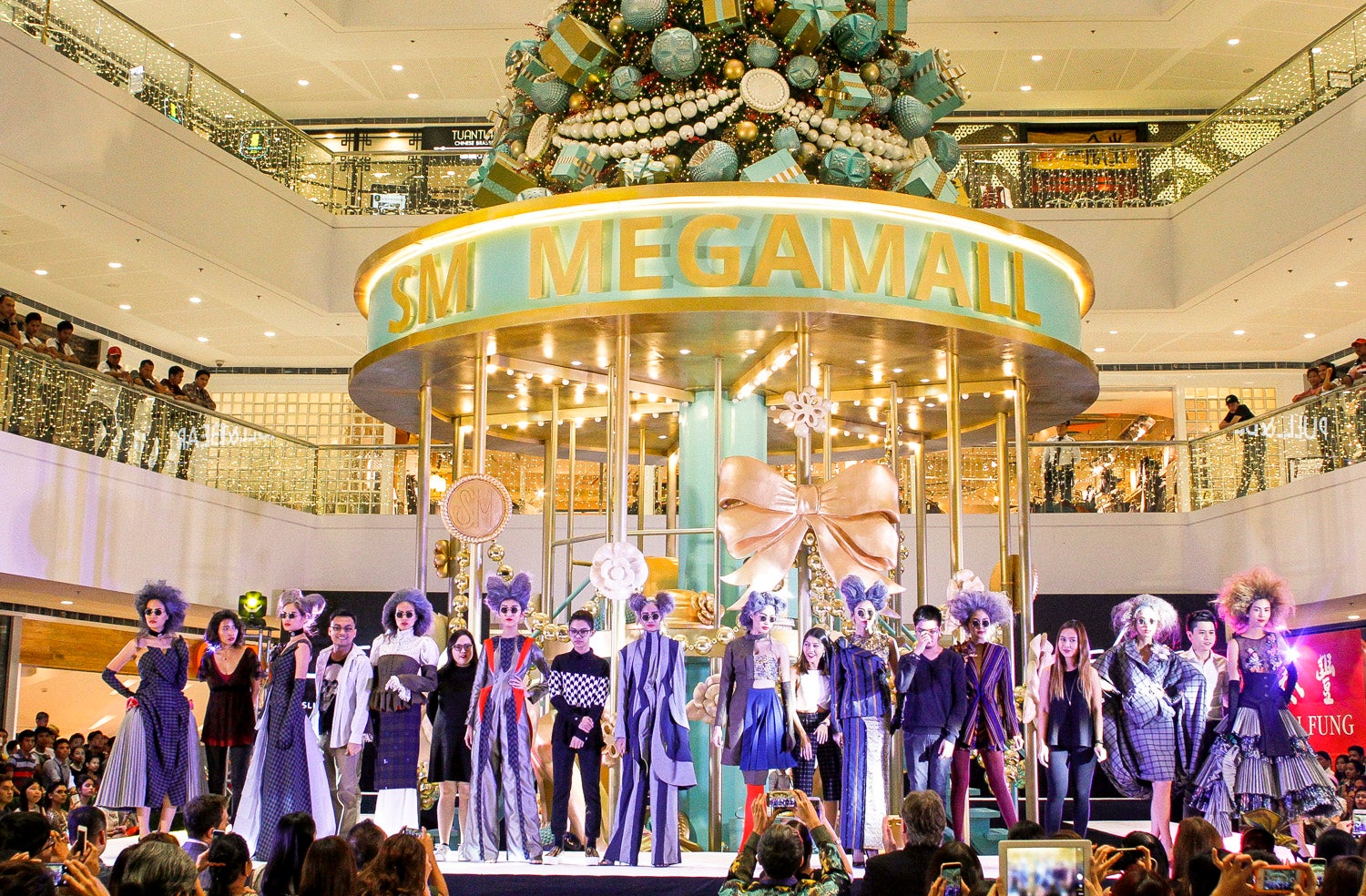 For their Face-Off debut, Slim's students agree to incorporate suiting materials and adopt uniform styling for their segment. (TORRALBA)

Inquirer Lifestyle gave fashion watchers a glimpse of the future when its 2015 Face-Off showcased the designs of  students of the country’s top fashion design schools last Nov. 23 at SM Megamall’s Mega Fashion Hall.

For the first time, the top fashion design schools came together in a comparative showcase of their works.

For the first time as well since its inception in 2009, Face-Off eschewed established names in favor of budding talents from Slim’s Fashion and Arts School, SoFA Design Institute, De La Salle-College of St. Benilde (CSB) and Fashion Institute of the Philippines (FIP) in an afternoon fashion show titled “Face-Off 2016: A Cut Above the Rest.”

Every school picked six to eight students, each of whom was asked to do one to three looks.

More than a fashion showdown, the event directed by fashion designer Tonichi Nocom became a celebration of style and individuality, as students showed what they could do best based on what they learned in school.

2015 Face-Off, organized by Lifestyle’s To Be You youth subsection, was done in collaboration with SM Megamall, upon the initiation of SM team vice president Millie Dizon and executed by the creative team led by Nocom.

It had the major support of Converse and O+USA, with Oishi, Canon.

There was no particular theme, but the emphasis was on cut and construction.

Except for a few like CSB’s Viña Romero, winner of 2014’s LOOK of Style Award (another project of Inquirer Lifestyle and LOOK magazine), many of the students had never joined a fashion show.

After learning the rudiments of fashion design, including pattern-making, cutting and sewing, the students also got to experience participating in one of the most basic and effective tools to market themselves and their creations, thanks to Face-Off.

“Joining a fashion show was totally different from joining a fashion exhibit,” said Slim’s Reymund Claridad after the show. “It was definitely much harder. Instead of a mannequin, this time a human being was wearing my clothes. I had to consider the model’s body, the movement and fit. It couldn’t be too tight or too loose.”

Using a single, uncut material, Claridad produced a skirt suit with built-in cape that harked back to the early 1960s.

He also closed Slim’s segment with a Christian Dior-meets-“Little House on the Prairie” tiered dress, which combined mannish fabrics with floral prints.

Except for Slim’s students who agreed to blend suiting materials with various fabrics, the other students chose whatever materials worked for them.

Alaba and Tripudio opted for less formal and quirky looks. Alaba’s layered ensembles could go from day to evening, while the latter’s mannish pieces consisting of black printed jacket and cropped pants were decidedly more for day.

“My first show was in 2012 in my hometown Angeles,” said Tripudio. “Every show  I did felt exactly the same—the backstage anxieties involving the missing model, the missing shoes. But Face-Off’s stage was amazing. It reminded me of a Chanel couture show.”

Tripudio considers FIP’s “technical” approach as something “important in fashion.” The school taught him and his classmates to be more imaginative and ready “even if a sewer doesn’t show up.”

“FIP’s vision is to teach its students all the necessary ingredients in creating a garment—from conceptualization, fabric sourcing, pattern-making, sewing to embellishments,” said veteran designer Shanon Pamaong, founder and director of FIP. “Much attention is also given to workmanship, finishing and fitting, as well as the clothes’ wearability and commercial value. After all, fashion is a business.”

Since fashion has become more global with the advent of the Internet and social media, it’s also important to encourage students to express their cultural identity in a “very unique and non-cliché way,” said architect Tobias Guggenheimer, dean of SoFA.

“We teach students to tell multiple stories,” he said. “Their own stories, stories of their potential clients and something about their cultural identity. We hope that students who come to SoFA, Filipino or not, will leave with the idea that they’re cultural workers with a serious responsibility to develop their own culture.”

Go’s A-line skirts even incorporated what appeared like handmade paper, while Duran combined multiple tailored and draped cotton separates that can be paired with existing pieces in a client’s closet.

“The challenge for me was to create looks inspired by avant-garde ideas without sacrificing wearability and sportswear appeal,” said Duran. “Making the clothes myself enabled me to experiment with new and creative ways to pattern, cut and drape.”

As chair of CSB’s fashion design and merchandising program, veteran designer Lulu Tan Gan follows the school’s “learner-centered” philosophy, based on the belief that each student is endowed with talents that should be “understood, appreciated and nurtured.”

“Whether the student’s motivation is creative or business, the challenge for us at CSB is to be able to integrate the two to help him or her discover opportunities for entrepreneurship in a competitive industry like fashion,” she said.

Established 50 years ago by designer Salvacion Lim-Higgins, Slim’s is the oldest among the four fashion schools.

Like Claridad, Ernest Huiso, Nina Gatan, Bea Samson and Ian Viernes produced exceptional pieces. The silhouettes and inspirations were classic, but the students’ take and choice of materials certainly weren’t.

Huiso’s tiered long dress reminded us of Ronaldo Arnaldo’s work, while Viernes seemed to be channeling Joey Samson and Ivar Aseron with his pair of tailored and deconstructed jumpsuits. Also noteworthy was Gatan’s fun and updated take on Dior’s New Look.

“Slim’s is always known for its technique and craftsmanship —what we refer to as the Slim’s method,” said Mark Higgins, son of Salvacion Lim-Higgins and one of the school’s directors.

“Before they did their collections, these students studied pattern-making, tailoring and draping. We asked them to incorporate the techniques they learned in school to these pieces.”

Rather than see it as a venue for competition, Higgins considers Face-Off an ideal opportunity for the public to see a variety of work from the participating schools. It’s also a good opportunity for students to show their skills.

And should any of these students make a name for themselves, and we’re pretty sure many of them would, remember that you saw their works first in Face-Off.