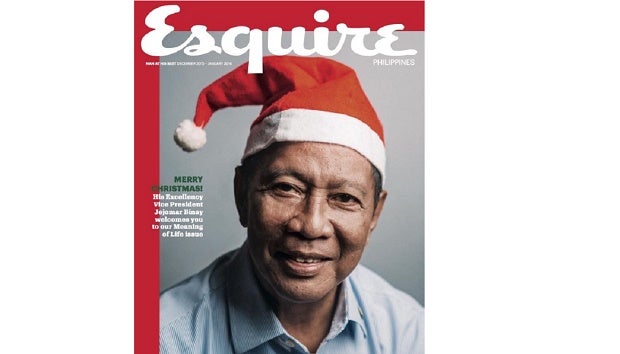 Binay to share ‘meaning of life’ in Esquire issue

The December issue of the magazine is dubbed “Meaning of Life.”

On the front cover, Binay gives a toothy smile while wearing a Santa Claus hat.

“We end this year with another thought provoking issue. We’ve featured presidentiables (reluctant and otherwise) on ESQUIRE before. For our December 2015-January 2016 Meaning of Life issue, Vice President Jejomar Binay graces our cover,” Esquire said on its Facebook account

“While in the middle of the biggest political campaign of his life, Binay also juggles a number of controversies and cases—but that’s nothing new for the second most powerful man in the country,” it added.

Binay was indicted for graft by the Ombudsman for allegedly rigging the procurement for the design and construction of the P2.28 billion Makati City Hall Building II, deemed the country’s priciest car park building, when he was Makati mayor.

Binay also faces four other plunder and graft complaints before the Ombudsman over the alleged anomalies involving the Makati Science High School Building, University of Makati, a Fort Bonifacio property and over an allegedly anomalous land deal between the Alphaland and the Boy Scouts of the Philippines, where Binay is long-running President.

Binay decried political harassment by his detractors who, he said, intend to derail his presidential bid in the 2016 elections. RAM