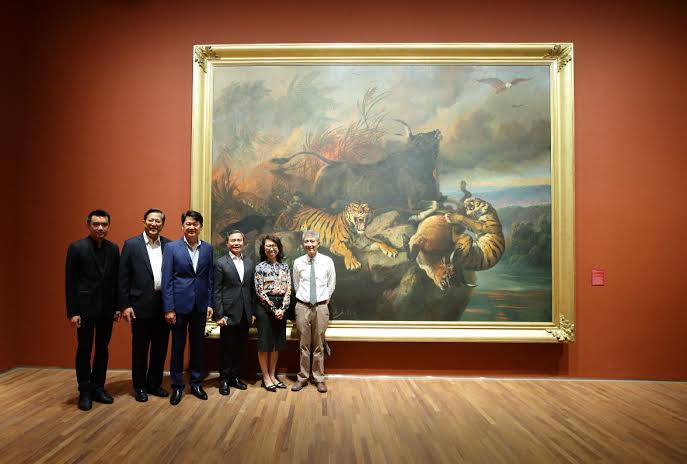 LOANS from the National Museum, Bangko Sentral ng Pilipinas (BSP), Cultural Center of the Philippines (CCP), and Metropolitan Museum of Manila as well as from key private collections   have enabled National Gallery Singapore (NGS) to open with a bang recently and stake its claim as the region’s foremost repository and showcase of Southeast Asian visual arts.

Unconfirmed reports said the renowned art collection of the late Dr. Eleuterio “Teyet” Pascual had also been loaned to the NGS, which opened last Nov. 24 with an inaugural exhibit on Southeast Asian art at its UOB Southeast Asia Gallery.

The Pascual collection is perhaps the biggest collection of Filipino masters in private hands. Its centerpiece is the very beautiful “La Banca,” by Felix Resurreccion Hidalgo.

NGS neither confirmed nor denied it had loaned the Pascual collection.

“The National Gallery Singapore will exhibit artworks on loan from various institutions and different private collectors from Singapore and Southeast Asia,” the NGS statement said. “Some of the collectors wish to maintain their privacy and the Gallery respects this decision.”

The $532 million museum, housed in the restored buildings of the former Supreme Court and City Hall, was inaugurated by Prime Minister Lee Hsien Loong.

“It is the first museum of such scale in the world dedicated to the art of Singapore and Southeast Asia,” said the Straits Times.

Among the Philippine works in the inaugural exhibit is an abstract by National Artist HR Ocampo, said the newspaper.

“The museum’s DBS Singapore Gallery and UOB Southeast Asia Gallery display some 800 works of art from the 19th century through to the modern day. They include paintings by pioneer Singapore artists Cheong Soo Pieng and Chen Wen Hsi, and forerunners of modern art in the region such as Indonesia’s Raden Saleh and Hernando R. Ocampo from the Philippines.”

In an interview with Lifestyle Arts and Books, Clarissa Chikiamco, Filipino curator of the NGS, said loans came from both public agencies and private collections.

“Aside from National Museum, Philippine institutions which have loaned artworks to us for the UOB Southeast Asia Gallery are Bangko Sentral ng Pilipinas, Cultural Center of the Philippines, Ateneo Art Gallery, Ayala Museum, Metropolitan Museum of Manila and University of Santo Tomas Museum,” she said.

“We also loaned artworks from the Del Monte Pacific Collection and the collection of Stanley and Abby Chan. We’ve also borrowed directly from artists (Peewee Roldan, Art Lab Manila) and artists’ families or estates (the family of the late Santiago Bose; Rodolfo Perez, Jr., the son of the late Rod Paras-Perez; Carmen Mesina, the sister of the late Roberto Chabet).”

During the inaugural exhibit, NGS loaned one work from the National Museum, José Joya’s “Hills of Nikko.”

“We consider it a very significant loan for us and it figures prominently in the particular room it’s displayed in,” said Chikiamco. “It is on loan to us for one year but of course, we would be very happy if National Museum could extend the loan to us for another year more! We will also very likely be making future requests for loans as our changing exhibitions program rolls out.”

The loan should illustrate how NGS values working along with the national museums of the region.

Also on loan to the NGS is Carlos “Botong” Francisco’s “Under the Mango Tree” from the UST collection, according to Fr. Isidro Abaño, OP, director of the UST Museum of Arts and Sciences, the oldest museum in the Philippines.

Chikiamco said of the inaugural exhibit at the UOB Southeast Asia Gallery, “Between Declarations and Dreams: Art of Southeast Asia since the 19th Century”, 50 percent of the works are loaned.

“We think it’s quite important to work with National Museum of the Philippines as well as other national museums in countries across Southeast Asia,” said Chikiamco. “It acknowledges the remarkable collections that national institutions across the region have managed to put together, reflective of the rich history of art in their respective nations.”

“There is also a great deal which can be learned from each other in various areas—art history, exhibition management, museology and artwork conservation, for example,” she added. “In our own way, the National Gallery Singapore hopes to contribute to facilitating this exchange.”

Chikiamco explained the loan period varies, although it’s for at least a year and at most five years. “For works on paper, we can only loan and display it for one year following our museum’s conservation policy for the display of paper work,” she added.

Chikiamco also stressed that NGS had to collaborate with private museums and private collectors.

“Loaning from private museums and individuals reflects the valuable collections that have been put together through private hands, private initiative and personal passion,” she explained. “It also reflects a larger part of the art world itself.”

“We would not have been able to do this exhibition without our lenders to whom we are extremely grateful to, not just for their loans but also their trust in us,” the curator added.

“The National Gallery Singapore, as a museum which focuses on the art of Southeast Asia, will not be able to stand alone without ties to the art communities of Southeast Asia, whether this be institutions, collectors, academics, curators, and of course, artists.”

Asked to address concerns raised by heritage advocates that Philippine art works may not anymore be in Philippine hands because they have been acquired by foreign elements through international auctions, Chikiamco denied Singapore was acquiring art of foreign countries “to lock and stock away.” She added “rumors” of Singapore’s wholesale acquisitions of Philippine art were exaggerated.

In any case, the virtues of Philippine art should be exposed to the wider world, she pointed out.

“I have had to answer [that question] to myself, both as a Filipino and as a curator who acquires Philippine art for a foreign country,” Chikiamco said. “The story of Philippine art and of course, the art itself, are extremely compelling and something which deserves to be shared beyond the geographical borders of the Philippines.

“The exposure of Philippine art abroad, particularly as part of a larger narrative, contributes to the appreciation and respect for our art, culture and history.

“We have so much to be proud of in Philippine art, we should share this with the world.”

“National Gallery Singapore isn’t acquiring Philippine art to lock and store away,” she said. “We want it on display where members of the public, local and foreign, will be able to see them. These members include the Philippine community in Singapore, of which there is a strong and growing presence.”

Chikiamco added NGS “would also be keen to lend its artworks to museums in the Philippines and internationally.”

Chikiamco likewise explained the acquisition budget of NGS is not alone for Philippine works.

“The budget is spread across collecting Singapore art in depth and Southeast Asian art in breadth,” she said. “So apart from Singaporean art, in most cases, we won’t, for example, buy 10 works of one artist. It’s better to buy few or even just one artwork but it should be a very good one. With the prices and our budget spread across Southeast Asian art from 19th to late 20th century, it’s a lot of ground to cover. We need to spend our money wisely.”

Chikiamco explained the comparative approach adopted in the inaugural exhibit should provide some parallelisms between Philippine art and the art of other Southeast Asian nations.

She explained that the exhibit is curated both chronologically and regionally. Fifteen rooms are divided “on key impulses across four different time periods”; Authority and Anxiety (19th to early 20th century), Imagining Country and Self (1900-1940s), Manifesting the Nation (1950s to 1970s) and Redefining Art (post-1970s).

“There is a mix of artists of different nationalities represented in each room,” Chikiamco said. “In one room, you’ll see the art of Juan Luna and Félix Resurrección Hidalgo alongside the art of Indonesian 19th-century painter Saleh. In another room, you’ll find an uncanny resemblance between an abstract work of Lee Aguinaldo to the abstract work of Singaporean artist Anthony Poon beside it.”

“Seeing Philippine art in a broader context and in the context of Southeast Asia would be, we hope, enlightening,” said Chikiamco. “It shows the Philippines has a strong connection with its neighbors and not just in the art on display but also the historical context in which artists responded to. There is something deeply meaningful in identifying and exploring connections with the rest of the region.”