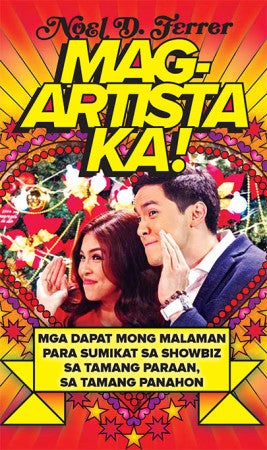 THE COVER of "Mag-Artista Ka!"

Noel Ferrer reaches for the stars–in his own way

NOEL D. Ferrer has the busiest business card you’ve ever seen. Among the occupations listed on his card are: Film, TV, record and events producer and writer, author and columnist, part-time host and faculty member. Outside of all those, it’s the occupation right under his name that keeps him busiest: Talent manager.

Ferrer, after all, is the man behind the talent company My Launchpad and handles the careers of Ryan Agoncillo, Iza Calzado, “Kuya” Kim Atienza and Atom Araullo, among others. All things considered, that’s a pretty unusual lineup of talents—no cookie cutter characters there—and it’s by design as far as Ferrer is concerned. His books are pretty unusual as well.

The “author” part of his card became true last September, when Ferrer’s book, “Sisikat Din Ako! Your Guide to Making Your Mark in Show Business,” published by Anvil Publishing, was launched at the Manila International Book Fair to mark Ferrer’s 25 years in the industry.

The book is no safe, rah-rah exhortation for everyone to try their hand at becoming celebrities. “Sisikat” included cautionary tales about career mishaps as well as discussions of everything from reality shows and “mommy-gers.” The book contains answers to burning questions from current celebrities as well as experts talking about their fields. It lives up to its subtitle and is not your usual showbiz project.

“I’ve always been a follower of entertainment, but I never thought of getting into it as the main thing for me,” Ferrer recalls. He watched TV everyday, following the careers of Nora Aunor and Sharon Cuneta; staples included “Ryan, Ryan Musikahan,” “Palibhasa Lalaki,” “Abangan ang Susunod na Kabanata” and “The Probe Team.”

After graduating from Ateneo de Manila with a philosophy degree, Ferrer worked as a teacher and administrator there for a while—but the urge to work in showbiz proved very strong. The creativity involved in production appealed to him. He became involved with the establishment of the terrific magazine show “Tatak Pilipino.” “I always wanted to find a balance between academe and working,” he says. “Academe would give you the theory but there weren’t many venues for application.”

As a writer and producer, Ferrer worked for ABS-CBN on the creation of the long-lived Sunday variety show “ASAP” and then branched out by working on “The Sharon Cuneta Show,” “Martin After Dark,” Mel & Jay,” “Alas Singko y Medya,” “Breakfast” and “Y Speak.” Ferrer kept looking for something away from the mainstream. He worked with GMA Films, trying to increase the company’s diversity of talent and clout in the industry for three years.

In the process, Ferrer had met people who turned to him for guidance. The actor/host Ryan Agoncillo actually convinced Ferrer to become his manager. It didn’t occur to Ferrer to do so, as he considered himself more of a production person. “Ryan said, ‘do it na, Noel, you already know how to program careers,’” Ferrer remembers Agoncillo saying. It is really a natural progression.

Ferrer says he convinced Atom Araullo to go into TV after Araullo lost in the student council elections at the University of the Philippines. It seems to have worked out for Araullo, now seen regularly battling the elements as a reporter for ABS-CBN. It was Iza Calzado’s father, Lito Calzado, who asked Ferrer to handle her career. Others under his aegis are Luis Alandy, Marco Alcaraz and Precious Lara Quigaman.

He clarifies that My Launchpad isn’t your usual talent management company (of course it’s not). Ferrer doesn’t get paid a set fee or percentage by clients; instead, his clients decide how much or how little they will pay him. “Walang sapilitan. Bahala sila (It’s all up to them).” The company exists just to take care of his clients’ commercial and legal requirements. “I didn’t want to make money out of the career,” he explains. Ferrer continues to do network consultancy and production work. “You don’t to find talent to survive. That allows me to choose whom to handle.”

‘Out of the box’ talents

Ferrer has a very particular kind of talent in mind for his company, My Launchpad. If the talent would be better suited in Star Magic or GMA Talent Center, Ferrer tells them this outright. He’s drawn to “out of the box” talents. “If there’s a different career path for them and they have their own minds, I come to them,” he says. He also professes affection for the underdog or under-utilized talent, such as those who might be with a network but have potential to do much more. It’s never about the money: “It’s more about talent and being good people. There are many talented people, but who among them are good people?”

Ferrer had been planning to write about the formation and development of stars. “In this industry, there’s no action and reflection cycle,” he says. “They commit the same mistakes and a lot of resources are wasted.” It so happened it was his 25th year in the industry as well. “Sisikat” took 10 months to produce. The most difficult part was tailing actors and actresses to get answers and interviews for the book. For an industry known for its onion-skinned inhabitants, Ferrer didn’t hold his tongue talking about career mistakes. “People will just never learn if you don’t point it out to them.”

His best piece of advice for those aspiring to become stars: “Be relevant. Stay relevant.” The aspirants need to avoid not knowing what they want. There are many forces in the industry that will simply overpower those who don’t know what they want.

Ferrer charts the drastic changes Philippine show business has undergone recently. “Mag-Artista Ka!” has an expanded portion tackling what “AlDub” means. Ferrer emphasizes the meaningful subtitle: you can be successful, but at the right time and in the right way. Alden Richards, Ferrer says, is a fine example of waiting for the right time. Look at him now.

Because Ferrer’s book was originally in English, Anvil went on and asked Ferrer to update it while Galileo S. Zafra and Jerry B. Gracio translated it into Filipino. As a result, “Mag-Artista Ka!” feels very organic, like it’s what was always meant to be. It feels like Noel Ferrer in book form. For his part, Ferrer has plans to continually update the book. “There will be more stories of people who will become famous,” he says. “The stories are all different and there’s so much we can learn from them.”