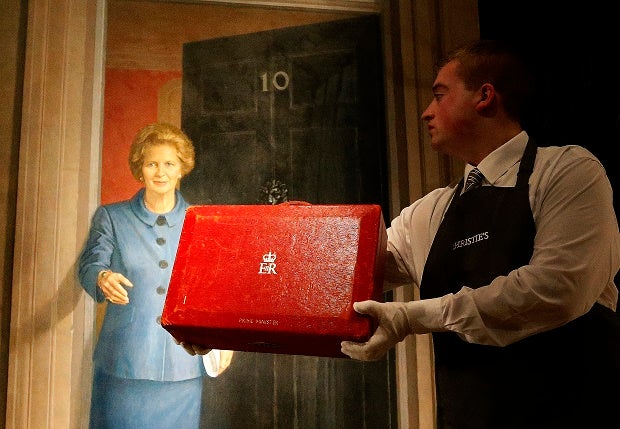 A Friday, Dec. 11, 2015 photo from files showing a Christie's employee holding the red leather Prime Ministerial Dispatch Box at the auction house Christie's in London. The Iron Lady is auction gold. Speeches, books and outfits belonging to late British Prime Minister Margaret Thatcher  including the Iron Lady's wedding dress  have soared above their estimated prices at a London auction. Thatcher's red prime ministerial dispatch box sparked a bidding war and sold for 242,500 pounds ($365,000). It had been estimated to reach between 3,000 pounds and 5,000 pounds. AP File Photo

A model of an American bald eagle given to Thatcher by close ally and former US president Ronald Reagan fetched the highest price for an individual item at £266,500 after a flurry of bidding in person, online and by phone.

The model, with the message “with best wishes from Ronald Reagan,” was sold to an online buyer and had been given a top estimated sale price of £8,000 at the London auction.

The former British prime minister’s famous red ministerial box was the next most expensive item, selling for £242,500.

Initially expected to sell for between £3,000 and £5,000, auctioneer Jussi Pykkanen finalised the sale to an unidentified buyer with a bang of his hammer, to applause from the audience.

The box, in which the late Conservative leader would carry confidential documents, is one of the most iconic of around 200 of Thatcher’s personal belongings offered for sale by Christie’s.

Many have been advertised online since December 3, with the sale due to end at 1500 GMT Wednesday.

Items which belonged to the “Iron Lady,” Britain’s first female prime minister, have often sold better than the clothes she wore.

A sheet featuring a typed prayer attributed to St Francis of Assisi and signed by Thatcher, which she quoted on first arriving in Downing Street in 1979, sold for £37,500, despite an initial estimate of between £600 and £900.

Some 200 buyers followed the sale online and many others by telephone, including prospective bidders from Austria, South Korea, Australia and the United States.

Thatcher was the daughter of a seamstress and as a child she and her sister made their own clothes, she added.

“When she became the first woman prime minister, she used clothes as a way of emphasising her power,” Etherington-Smith explained last week.

“Every time there was a photo opportunity, she was beautifully dressed, immaculately coiffured, with a nice handbag, and she looked what she was: a powerful person.”