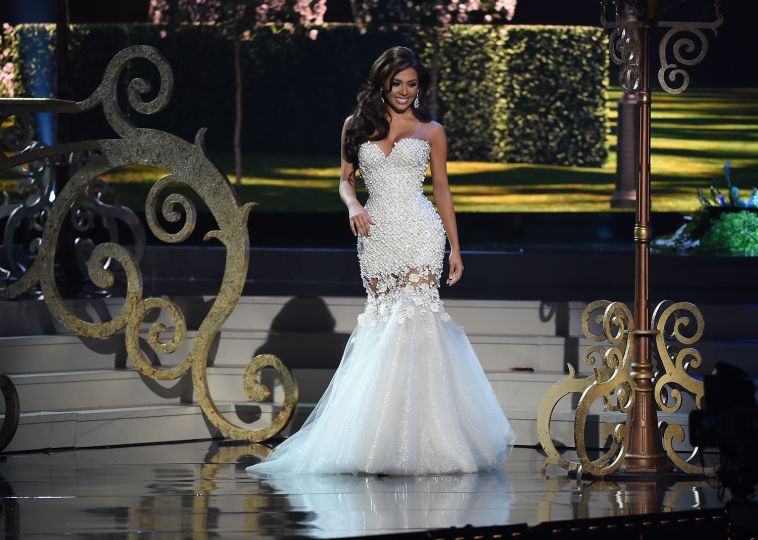 (Pageant fans who had high hopes for Lastimosa, blamed her gown and, by extension, Binibining Pilipinas Charities, Inc. for the debacle.

(For some reason, this article failed to see print online. Now that our beauty queens’ gowns have again become a trending topic on social media, as new Philippine bet Pia Wurztbach competes this Sunday [Monday morning in Manila] in the Miss Universe finals in Las Vegas, we decided to upload this old article.

(See for yourself if you agree with our panel of experts. Based on what you saw during yesterday’s Miss Universe preliminary competition, is Wurztbach bound to suffer the same fate?)

OLIVIA Culpo, who edged out Janine Tugonon in 2012, didn’t exactly wear the best evening gown. But the petite American managed to break into the top five and eventually win Miss Universe.

So, can a single gown boost or ruin a beauty queen’s chances in the finals?

After the Philippines’ Mary Jean “MJ” Lastimosa, one of this year’s front runners in Miss Universe, didn’t make it as finalist, not a few beauty pageant fans started blaming on social media the strapless, form-fitting white serpentina number she wore to the finals.

Although it emphasized her curves, not a few observers felt that the gown’s paillette-studded bodice made her look a tad short and plump. The see-through panel around the thigh area didn’t help either, they said, as it only managed to cut the 5’7” Lastimosa in half.

Pageant-crazy Filipinos are without a doubt disappointed, even livid. After all, they had high hopes that Lastimosa would finally end the Philippines’ 41-year Miss Universe “drought” after her four predecessors coasted easily into the top five.

But after a solid showing in the swimsuit portion, Lastimosa’s luck soon ran out.

Instead, it was 22-year-old Paulina Vega who ended her own country’s 56-year drought by winning the second Miss Universe crown for Colombia.

But no less than Margie Moran, president of Ballet Philippines and the country’s second Miss Universe, downplays a gown’s importance in the finals.

“A gown per se will not be a factor in winning or losing,” says Moran, who won the title in 1973. “It all depends on how one feels while wearing it. Winning anything is a gift. There’s no exact formula to it.”

Moran may have a point. Julia Alipova, the current Miss Russia, made headlines after wearing a pricey red Elie Saab ball gown during the preliminaries. Despite looking like a million dollars, she didn’t even make the first cut.

But Moran, perhaps unaware that Lastimosa was reportedly required by local pageant organizers to wear no other gown to the finals except the one designed for her by Colombian Alfredo Barraza, also has this to say.

“If the gown will make me feel horrible, I will refuse to use it. But if I feel great wearing it even if most see it as horrendous, then it should still boost my confidence.”

During her time in Athens, Moran was the one who chose from several gowns especially made for her by then young Filipino designer Auggie Cordero. For her national costume, she wore a white terno designed by the late Aureo Alonzo.

Lastimosa and her immediate predecessors didn’t have the luxury Moran had. Every item they wore in Miss Universe was already preselected for them before they flew to their respective host cities.

Gio Flores, beauty and aesthetics director of Kagandahang Flores and one of Lastimosa’s mentors, believes that the Philippine bet gave an “exceedingly solid performance since day one.” She also underwent an “amazing” physical transformation.

“It was just a matter of luck,” says Flores. “The white Barraza gown is really beautiful and well-constructed. I guess white isn’t MJ’s winning element. Since I handled her, she has been advised by Master Hans, my geomancer friend, to wear fire colors because fire is her best element.”

Lastimosa requested that she wear red to the finals, Flores adds, but in the end it was Binibining Pilipinas Charities, Inc. (BPCI) Chair Stella Marquez Araneta’s call. She did get to wear several red and fuchsia dresses during special appearances.

But Flores believes that Lastimosa’s best suit isn’t in the gown portion, but in the Q and A segment because of her “excellent skills” as speaker.

In a year when no particular finalist gave a memorable answer, the articulate Lastimosa could have run away with the crown, he says. If only she was able to break into the final five and had the chance to speak.

“She would have delivered a heartfelt response to any question,” says Flores. “The sincerity and beauty of her heart would shine through and that would give her an edge over the others.”

R, a pageant fan and professional stylist, thinks Lastimosa did very well during the preliminary judging, but not during the finals.

“MJ was full-on aura during the preliminaries,” says R, who requested us not to reveal his name. “She turned on the charm and all the tried-and-tested tricks expected of a pageant veteran. I didn’t see that same intensity on the big day. She must have gotten nervous or tired. She didn’t shine as brightly.”

But R also feels that Lastimosa’s chances could have been boosted had she worn a “better” gown.

“She ended up looking short,” says R. “I really felt her lack of confidence while wearing it. I sensed it in her face.”

Culpo’s red velvet gown was also horrendous, he adds, but it was her youthful glow and confidence that made her win.

“Olivia looked fresher than Janine during their tight shots,” says R. “I was in denial before because I really felt Janine should win. Of course, I’m biased for the Philippines.”

Miguel Pastor, architect and also an ardent beauty pageant fan, thinks that luck and timing play a big role in such tilts. Lastimosa, who had more than three years to prepare, was no exception.

“The triumph of a Miss Universe contestant depends on what the judges are looking for in a particular year,” he says. “This means that a different set of judges would yield different results given the same set of girls.”

Since Lastimosa, who finally bagged the local title on her third attempt, had enough time to prepare, she was more than equipped to “rule the universe.”

“She was able to work around her weak points to sell herself as the best contestant to organizers, fans and judges,” says Pastor. “MJ had the right smile, makeup, set of teeth, hairstyle and demeanor. What she went through wasn’t easy. It was, after all, a battle involving the world’s most beautiful women in the world’s most popular pageant.”

But all that physical and mental preparation would have amounted to nothing, adds Pastor, without the right wardrobe that could flatter one’s assets.

“I don’t think the white body-hugging gown she wore to the finals enabled her to earn enough points,” he says. “It was ill fitting and made her look small. The red Cary Santiago gown she wore in an earlier event was definitely more flattering and elegant.”

Apart from Culpo, there have been other girls who wore atrocious gowns to the finals and still ended up winning. One of them, says Pastor, was Sweden’s Yvonne Ryding—Miss Universe 1984—who wore a heavy DIY-looking white gown edged with lace.

“There are so many great looking girls worthy of the crown every year,” he says. “In the end, their fate depends on a bit of luck and who made the best impression on the year’s set of judges.”

Designer Noel Crisostomo thinks that this year’s gown competition was really tough. Having said that, he adds that it’s not always all about the gown, but also how the wearer carries it.

“The finalists all carried themselves well except for Netherlands, but her yellow gown was exceptional,” says Crisostomo. “MJ’s gown looked dated. It lacked the wow factor and didn’t flatter her at all. In contrast, Colombia’s gown, which was also designed by Barraza, was not only very modern. The sheer material and vertical beadwork made her look really tall.”

In a tight contest, there’s no room for mistake. You need everything to look outstanding and impeccable to help you make the final cut, he adds.

“By earning a spot in the top 10 after the swimsuit portion, MJ proved that she was a strong contender,” says Curata. “It was only after the evening gown competition that she didn’t make the cut. She had the figure, the looks, the confidence and the walk. What other reason could it be?”

Designer Dennis Lustico sees it a bit differently. Like R, he noticed that Lastimosa wasn’t as vivacious and radiant as she was during the preliminaries.

“A gown can surely help a delegate hurdle cut-offs, but in the end, I don’t think it can make or unmake a Miss Universe,” says Lustico. “MJ’s gown obviously added inches to her body. She could have worn a more flattering and elegant piece. But I think it was her diminished luster on D day that affected her chances.”

Designer JC Buendia, a frequent judge in local beauty pageants, swears by the power of a beautiful gown to boost a delegate’s confidence.

“I try not to look at just the gown, but how the candidate wears the gown,” he says. “But most of the time, you can’t help get drawn to a beautiful gown.”

Buendia also feels for Lastimosa and the tough situation she found herself in. Since everyone was expecting her to finally win Miss Universe after several near finishes by her predecessors, pressure was written in every move she made.

“Her entire routine ended up looking too studied. She lost that vivacious glide,” he says.

None of the designers made any scathing comments on BPCI’s decision to hire only foreign designers. Barraza, for instance, has been making the gowns of Filipino beauty queens to Miss Universe since 2001.

But as president of the Fashion Design Council of the Philippines (FDCP), Buendia, like many of his colleagues, feels that Filipino designers should be the ones to dress up the country’s official beauty pageant representatives.

“It’s but natural,” he says. “That’s why FDCP is currently drafting a petition paper regarding this matter.”