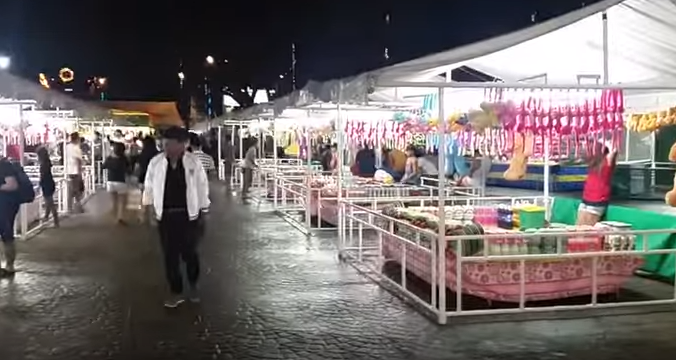 12 ways to spend Christmas in Metro

Christmas, it’s been said, is mainly for children.

But grown-ups who want to relive their childhood need only go to the carnival—and there are several within Metro Manila—to feel young again.

In Marikina City, the perya (street carnival) is located at Riverbanks Center, a 20-minute drive from Commonwealth Avenue in Quezon City, or a short jeepney ride from the LRT-2 Katipunan station.

The rides are cheap, just P30 each, except for the bump cars (P50), and the Viking (P60), which gives one the sensation of riding a swinging pendulum. Those who miss the roller coaster ride can try the Caterpillar, a familiar sight in most school fairs.

For revelers who want a view of the Antipolo-Marikina-Ortigas skyline, the three-minute Ferris wheel ride is your best bet. Just don’t try it on a full stomach.

There are games galore as well, including the tangga or the coin toss game, where players stand to win toys, packets of chips and plastic bowls, if their peso coin lands inside the board’s squares.

Tired of the rides and games? How about some last-minute Christmas shopping in one of the many bazaars nearby?

There’s the Circle of Fun located inside Quezon Memorial Circle and accessible through the Philcoa underpass, or by cab.

The privately owned amusement park charges a P30 entrance fee, with kiddie rides costing P40 each. Those meant for adults, which have height restrictions, cost P50 and P80 each. There are 28 different rides offered, including the Fun Drop (P80) and the Sea Dragon (P50).

For the Fun Drop, riders are strapped to the seat and lose their sense of gravity as they are hoisted nine times at different heights. The Sea Dragon is much like the Viking ride, where riders sit on a vessel that swing sideways like a fancy-shaped pendulum.

For a P20 entrance fee, fun-seekers can head over to the Pedal N Paddle, just a few steps away from the Circle of Fun. Its offerings range from go-kart rides, boat rides within the park’s small “island,” and a fish spa for the tired and weary. Its best attractions, however, are the Skybike and its 4D theater.

The Skybike (P100) involves riding a bike along an elevated rail that circles half the park’s area. The 4D ride meanwhile requires a pair of goggles to enhance the virtual reality experience.

The mini theme park inside Quezon Memorial Circle is open year-round, except Mondays, from 3 p.m.

Shoppers can also have their fill of retail therapy at the nearby tiangge (bazaars). Here are a few suggested bazaars to head to: Marikina Riverbanks Christmas Saya Bazaar

The organizer of the QC Circle Weekend Market brings in more than 400 stalls for 109 days in this bazaar that also have a carnival and a regular raffle. The expo runs until January, ideal for post-Christmas shopping.

Already on its 15th year, this is the go-to place for Christmas decor and assorted gifts.

Aside from the more than 100 participating concessionaires, the expo has prepared hourly raffles and games, a baggage counter and a live Santa Claus for the children.

From genuine to synthetic leather, from heels to flats, from casual to formal, shoes here are sold at very reasonable prices.

One of the longest-running tiangge in Metro Manila, this shopping haven offers toys, clothes, gift items, shoes, bags, and perfumes, among other consumer goods. There are also food stalls nearby for comfort food, and the animated tableau of a traditional Paskong Pilipino.

Looking for clothing, Marikina-made shoes and slippers, toys, sports gadgets and even books? This tiangge, which opened in October and will close on Jan. 10, 2016, may have the answers. Shoppers also swear this place has the best—and cheapest?—fishballs in Quezon City. Best time to visit? After attending the 6 p.m. Mass at the nearby church.

Where: Near the University Arcade at the Parish of the Holy Sacrifice, UP Diliman, Quezon City