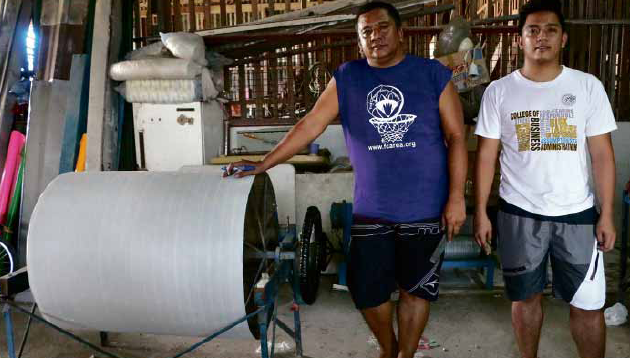 Colors in genes of lantern makers

CITY OF SAN FERNANDO, Pampanga—It must be in the genes.

Karl Ernest Quiwa’s participation in the ligligan parul (giant lantern festival) today is proof that the craft, passed on through six generations in his family, is alive and thriving.

Like his grandfather Ernesto and father Eric, the 21-year-old Quiwa seems to have imbibed the innovations devised by simple folk who started crafting the multicolored and lighted replica of the Star of Bethlehem without any degree in design and engineering.

The lantern makers “exemplify the ingenuity and creativity of the Fernandinos,” city Mayor Edwin Santiago said.

Quiwa is carrying on what had become a clan tradition and trade started by lantern pioneer, Francisco Estanislao.

Estanislao turned the traditional paper lantern into a gigantic Christian symbol in 1908. According to oral accounts recounted among members of the Quiwa-David clan, the salt vendor produced a huge lantern measuring 3.6 meters (12 feet) in diameter for the lubenas (the parade of lanterns for the nine-day Christmas dawn Masses) to honor St. Lucy of Syracuse, the patroness of Barangay Sta. Lucia.

Estanislao’s son-in-law, Severino David, continued the trade and started a series of innovations. Instead of bamboo, the employee at the public works office at the provincial capitol welded galvanized wires to form the star-shaped frame in the 1930s. Still covered with coco fiber, the star-frame was fitted with 200 pieces of 12-volt bulbs that were lit by 20 car batteries that David had borrowed from La Mallorca-Pambusco, a bus company that maintained a large garage in the village’s Purok 6.

When the San Fernando Electric Light and Power Co. brought electricity to the town in 1927, David introduced the kalakate, a contraption consisting of a steel rod inserted into a paper cutter pad and installed with a row of hairpins. This was connected to a battery during the procession to make the giant lantern light up.

The device can also be plugged into an electrical outlet when the lanterns are set on display in front of the church at the town center.

David next installed a control panel with tumbler switches that, at a touch of a finger, made the lights go on and off.

Severino David’s son, Rodolfo, introduced the use of thin Japanese paper for his giant lanterns that he lighted up with 110-volt bulbs he had retrieved from the supplies of American soldiers during World War II.

In 1957, the younger David, then chief electrician of La Mallorca Pambusco, launched what present-day craftsmen hail as the “brain” of the lantern—the rotor.

This gadget consisted of a large metal paint can that was secured within a square metal frame. The can’s surface was exposed to electricity using hairpins as contact points for electrical current, much like Severino David’s concept.

The 1957 lantern was 4.2 meters (14 feet) wide and was lighted up by 600 white bulbs powered by generators borrowed, yet again, from La Mallorca-Pambusco. It was adjudged the best of that year’s set of lanterns.

Quiwa’s son, Ernesto, a protegee of Rodolfo David, built his giant lantern in 1984 using a metal frame that he reused year after year to cut down on costs.

Back then, lantern-making was mainly a community undertaking, with very little subsidy from the local government.

Ernesto also created the “jump,” a smaller rotor that helps the lantern shift its light patterns. In 1988, he started using plastic vinyl sheets instead of paper to cover the lantern’s frame so it could withstand the rains that were falling more frequently during December.

Quiwa’s contemporary, Mario Datu, did not have heirs to continue the craft. Datu was conservative and made his lanterns with tambor (middle part), siku-siku (star angles), puntetas (inner rim), palimbu (outer rays) and other elements of traditional lantern-making.

Lantern-making has become such a big Pampanga attraction that artisans of the craft now abound in the province, among the more popular being Susing Manalang, Belo Policarpio, Emilio Dizon, and several men known only by the nicknames “Limson” and “Apong Santo,” according to Ching Pangilinan, city tourism officer.

Even Quiwa’s uncle, Francis, has joined the fray, and is building the first giant lantern of Barangay Pandaras, which will be colored pink, the barangay captain’s preference.

Teddy Aguilar, who apprenticed under Ernesto Quiwa and who made the Barangay Dolores lantern that won in 2014, vowed to clinch another win this year.

“My inspiration was not my father’s (Ernesto’s) works but Mario Datu’s. I was then studying [at University of the Assumption] and would pass Datu’s garage every time I went home. I would always be amazed by his work and vowed to outdo him,” Quiwa recalled.

While Ernesto allowed his son, Eric, to observe every step of the lantern-making process, the younger Quiwa also turned to his uncles Toto (the brother of his mother, Zenaida) and Tony (the son of Rodolfo) for technical tips.

Karl has been as open to new ideas on the craft. He said he got his first lesson on the proper lighting designs using the rotor from his father. “He told me this was the brain of the lantern. He advised me to use my imagination,” he recalled.

But rotor-making has become more complicated, he added. During Rodolfo David’s time, the lantern’s bulbs were all white, so the hairpins that served as contact for the electric charge were limited to five pieces, he said.

“It was just a matter of which white bulb to turn on and off,” Eric Quiwa said.

When he ran out of hair pins, Jeffrey Tioden introduced in 2006 the use of rods from a bicycle wheel (a contraption locally called kable or cables).

Karl uses 36 cables for every color of bulbs used. His lantern has nine rotors.

The young Quiwa confessed to feeling the pressure being pitted against more experienced craftsmen. “(But) I’m doing my best,” he said.

Quiwa’s grandfather, Ernesto, however believes competition is secondary. “Spreading joy this Christmas through lanterns that dance with the music is the most important (consideration),” he said.

Giant ‘parul’ is about community honor