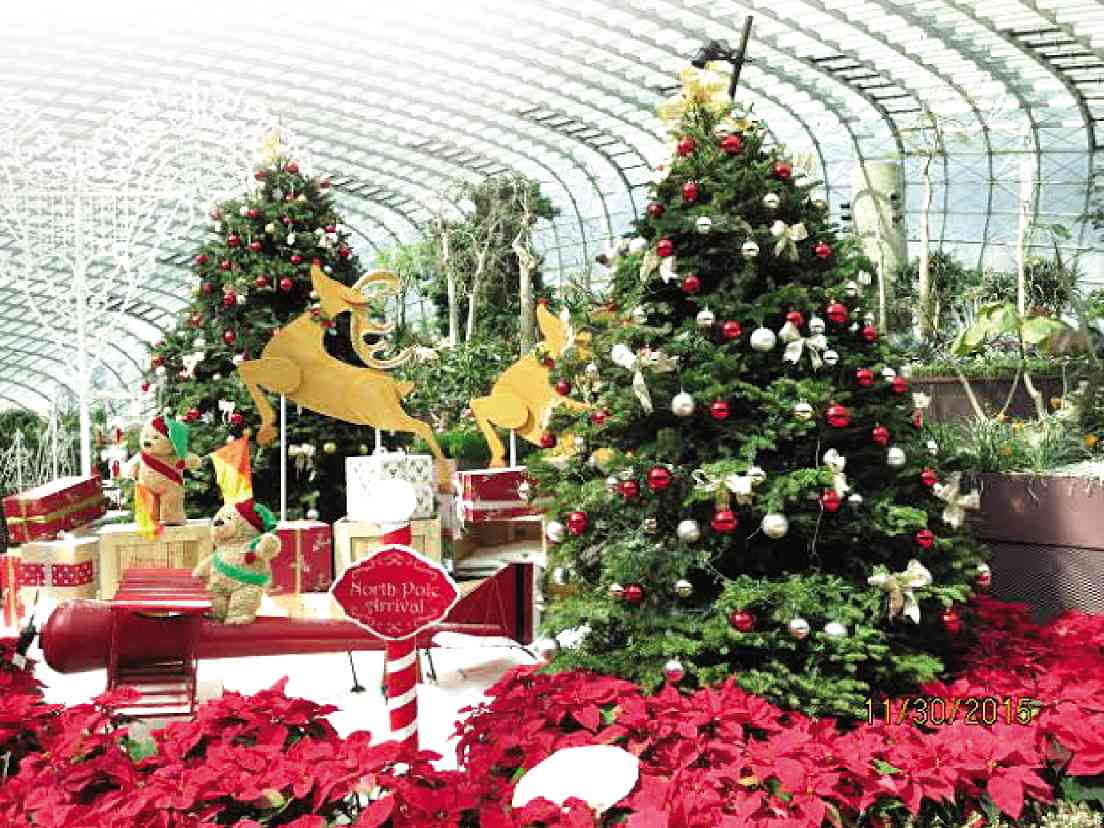 At the Flower Dome in Singapore’s Gardens by the Bay, peaceful coexistence takes on a new meaning. It’s perhaps the only garden in the world where Africa meets Australia, where prickly desert plants bloom side by side with stately pine trees, and where thousand-year-old olive trees from the Mediterranean thrive near exotic ghost trees from Madagascar.

Because of its climate-controlled condition, the 1.2-hectare Flower Dome is a place of eternal spring. Trees and plants don’t need to endure winter snow or summer drought because they all live in a magical greenhouse enclosed in glass that replicates the cool-dry climate of the Mediterranean region. In fact, the 2015 Guinness World Records has named the Flower Dome the largest glass greenhouse in the world.

Desert plants in the Flower Dome include the barrel cactus, which, as the name implies, is shaped like a barrel. Its rotund form has ribs from which protrude thorny spikes that help protect it from intruders. When grouped together, barrel cacti look like green pumpkins with an attitude.

Then there’s the unusually shaped bottle tree from Australia, whose trunk is devoid of branches. Instead all the branches grow on its top, and it’s from there where the leaves and twigs sprout.

On the other hand, the aforementioned ghost trees (moringa douhartii), originate from Madagascar, where they grow in local villages and beside traditional tombs (which is probably how they got their nickname).

The olive groves in the Flower Dome deserve quite a scrutiny, too. Oh, the stories those trees could tell, some of them estimated to be 1,000 years old. With their gnarled roots and twisted branches, they have been transplanted from an orchard in Spain which was about to undergo development. Thanks to Singapore’s Gardens by the Bay, the trees have been saved from possible extinction and now live happy new lives in the Flower Dome.

But perhaps the most compelling reason to visit the gardens this Christmas season is its enchanting Christmas Wonderland. Here Christmas is in full bloom. Right at the center of the entrance are tall pine trees decked in glittering ribbons and balls and surrounded by a carpet of poinsettias. Reindeer, teddy bears and gift boxes add to the festive look. Just so no one misses it, signs point the directions to the “Enchanted Forest,” “Santa’s Workshop,” and “Toyland.”

And what fascinating displays there are. One bear is about to fly a toy plane while another waves a flag at the control tower. A tiered carousel has prancing horses on the first tier, and toys and Christmas candles on the upper tiers. Near it is a Ferris wheel with capsules bearing toys and gifts. And all around are more reindeer romping among the gold and red poinsettias as toy soldiers stand in stoic attention.

Elsewhere at the Gardens, evenings become more dazzling as light sculptures illuminate the 24-meter wide Spalliera and the Cassa Armonica Gazebo (which, unfortunately, we missed since we were there early in the afternoon).

And speaking of cuisine, the Gardens has several restaurants serving a variety of dishes, from the Majestic Restaurant’s fresh seafood and Chinese cuisine to a McDonald’s, to Satay by the Bay and Pollen’s British cuisine with Asian influences by Michelin-starred chef Jason Atherton.

One day is hardly enough to see everything that the award-winning Gardens by the Bay has to offer. The Cloud Forest beckons as does the intriguingly named Dragonfly Lake. But it being the Christmas season, visitors should probably choose the Flower Dome first, and reserve the rest of the attractions for later.