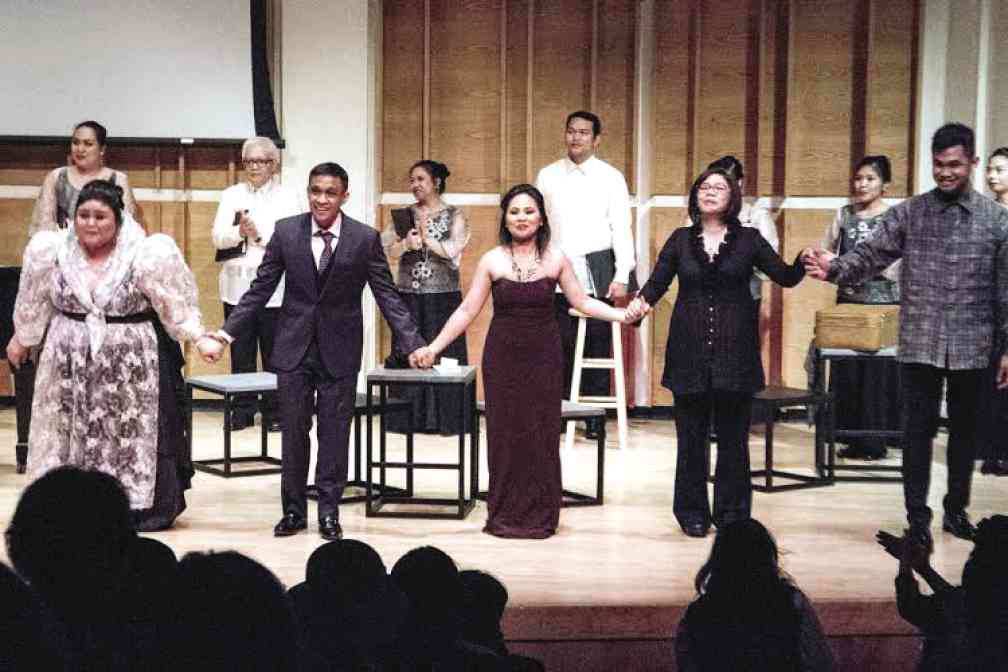 THE BROADWAY-WEST End mania in Manila continued with the small-scale British invasion that was “Beyond the Barricade” (The Theatre at Solaire), featuring songs from hit musicals like the wildly popular “Phantom of the Opera,” “Evita,” “Miss Saigon” and “Wicked.”

The come-on was the legendary “Les Misérables,” which will be staged in Manila early in 2016.

There were seven performers, three singers, one singer-musician, and three musicians: Andy Reiss (also music director and keyboard artist), David Fawcett, Katie Leeming and Rebecca Vere. They started cold at first, soon warmed up, hit their stride by the second act and had the audience in the palm of their hand.

Reiss was a standout, and singers and musicians brought the concert to a peak with their showy renditions of highlights from “Les Miz.”

Five choreographers joined forces for Ballet Philippines’ “Sarong Banggi,” a dance-concert at the Cultural Center of the Philippine (CCP). A leading couturier was tapped for the costumes and there was even a libretto about young love growing old. But the real star of the show was the music-time-honored Filipino songs as gloriously rendered in symphonic form by Ryan Cayabyab, who conducted the Philippine Philharmonic Orchestra (PPO).

Pampanga was represented by “Ati Cu Pung Singsing,” Manila by “Dalagang Pilipina,” “Si Filemon” and “Sampaguita,” the Cordillera by “Salidumay,” and Pangasinan by the lovely duet “Malinac lay Labi.” There was the lively “No Te Vayas” from Zamboanga City and “Sarong Banggi” from Bicol (the sponsor of the concert was the Albay governor). From the Visayas came the haunting “Ay Kalisud,” “Usa hay” and “Walay Angay.”

A fresh new sound resonated one recent evening at the CCP during the “Reveries” concert of the PPO under music director Olivier Ochanine. This was the French horn, as played with élan by Spanish horn player Javier Bonet, whose graceful body language only added to his performance.

Bonet played not one but two compositions: a movement from Mozart’s “Horn Concerto in E” and the complete “Horn Concerto opus 91” by Reinhold Gliere. The audience listened and rewarded the artist with an ovation at the end.

The Atlantis production of the musical “The Bridges of Madison County” (RCBC Romulo Auditorium, directed by Bobby Garcia) was as expected, a polished production, featuring a gutsy ensemble which sang country style and standout performances by Joanna Ampil (although her delivery of lines was not always clear) and Migs Ayesa. The production deisgn, however, made the set look like an art gallery.

The story of a woman no longer young (Meryl Streep in the film version) who chooses family commitment over true love, remained affecting. As a friend put it, “incurably romantic that I am, I think I shed a tear.”

Ace director Anton Juan brought to “The Secret Garden” (Repertory Philippines, Greenbelt I OnStage) an intellectualized, anticolonial flavor. In his notes, he intoned, “The secret garden… is the garden of real sensations and pulses, replaced by tablets and virtual realities.”

As the oppressive scientist-uncle Archibald, Martinez kept his orphaned niece Mary (Factor) at a distance until he succumbed to the magic of the secret garden which cured his seriously ill son Colin (Comla).

It was a good move of the Rep to end the year with this musical.

In New York, operatic tenor Rogelio B. Peñafirde Jr., as part of his advocacy of Philippine music in the American Big Apple, produced and performed in “The Great Filipino Composers Series” which featured the life and works of composer Nicanor Abelardo. “Projected as a yearly undertaking, I hope to feature the life and works of Ernani Cuenco next year,” he shared.

Earlier, Peñaranda was the lead singer of the New York-based band “Sounds of Manila,” which opened the concert of Grammy Award winner Patti Austin, and performed at the Asia Society of New York in connection with the Philippine Gold Exhibit.