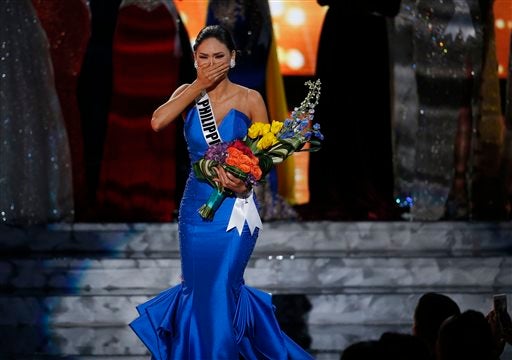 Pia Wurtzbach’s controversial win as Miss Universe 2015 drew mixed reactions even from senators who took to social media on Monday.

“Serious telenovela material! @PiaWurtzbach is #missuniverse2015 after the host first announced that she was the 1st runner-up,” Senator Pia Cayetano wrote on Twitter.

“Pinoys have such a sense of humor, congratulating me for @PiaWurtzbach’s win #missuniverse2015! We all stand proud with her,” Cayetano added.

“Siya kaya uli ang host next year (Will he be the host again next year)?” Senator Sonny Angara said in another tweet, apparently referring to host Steve Harvey, who made a mistake when he first announced that Miss Colombia Ariadna Gutierrez was the new Miss Universe, and Wurtzbach was first runner-up.

In a later statement, Angara praised Wurtzbach for showing  “grace under pressure” throughout the competition.

(Our thanks and congratulations to the new Miss Universe Pia Wurtzbach for giving honor to the entire country especially at a time where many Filipinos outside of Manila are reeling from the devastation caused by Typhoon Nona.)

(Kudos to Pia because she did not surrender on her dream despite various setbacks. She persevered until she accomplished her dream. She is an inspiration in her victory because of the grace she has shown under pression throughout the competition.)

Harvey later apologized and corrected himself that Wurtzbach was the real winner and Miss Colombia was the first runner up.

“Congrats to Pia-Miss Universe 2015! Its a proud day for the Philippines & the Filipino! I admire her beauty, grace & humility,” Escudero said.

Senator Grace Poe, in a statement, said Wurtzbach’s “story of resilience and perseverance is the story of all Filipinos.”

“Our warmest congratulations to the Philippines’ own, Miss Universe Pia Wurtzbach,” Poe said.

“Her story of resilience and perseverance is the story of all Filipinos. She inspires with her grace and compassion for others. The Filipino heart indeed shone through! What a wonderful Christmas gift to us. It will bring many of us some much needed Christmas cheer,” she added. IDL