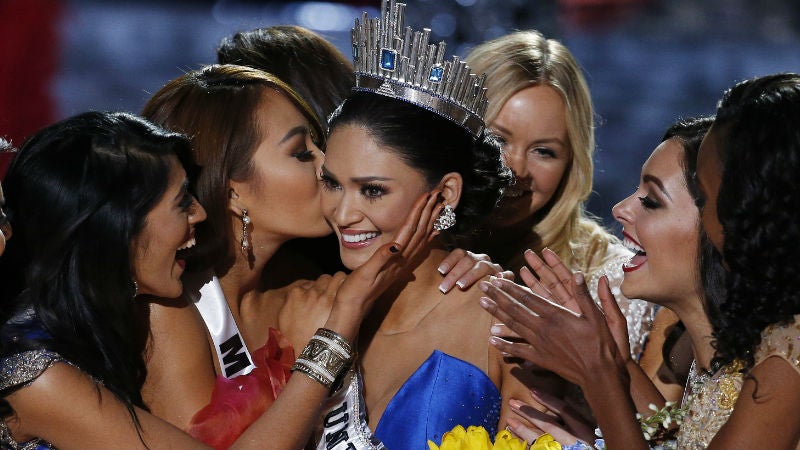 Other contestants congratulate Miss Philippines Pia Alonzo Wurtzbach after she was crowned Miss Universe at the Miss Universe pageant Sunday, Dec. 20, 2015, in Las Vegas. According to the pageant, a misreading led the announcer to read Miss Colombia Ariadna Gutierrez as the winner before they took it away and gave it to Miss Philippines. (AP Photo/John Locher)

PIA ALONZO Wurtzbach is living proof that no dream is impossible once you put your heart and mind in it. Had she given up after losing big during her second attempt to win one of several crowns up for grabs in Binibining Pilipinas, the country would probably still be without its third Miss Universe today.

Instead, Wurtzbach joined for the third time the following year with moist eyes set not just on any other crown, but the biggest of them all: Miss Universe-Philippines. With her quick wit and ready smile, she handily won the top prize, but still wasn’t spared from bashers who lost no time criticizing her rather healthy physique.

Undaunted, the 26-year-old, after winning the crown in February, immediately hit the gym and trained hard under fitness expert John Cuay. She focused on exercises targeting muscles around the core area or stomach, and read up and practiced portion control and healthy eating.

In no time, Wurtzbach was able to achieve a trimmer, leaner and more toned figure, which was on full display during last week’s Miss Universe preliminaries and Monday’s finals.

A product of a broken home, Wurtzbach has always been a self-starter even at a young age. She and her younger sister Sarah were born in Germany, but had to leave the country for the Philippines with their Filipino mother when she and their German father separated when Wurtzbach was 9 years old.

She entered show business at a tender age as Pia Romero, and became the family’s breadwinner when she was barely 11 as one of ABS-CBN Star Magic’s contract stars. Because of her crazy schedule, formal education had to take a backseat, but this didn’t stop her from reading up and absorbing everything like a sponge.

Apart from being independent-minded, Wurtzbach can probably put to shame not a few college graduates for her good command of English and ability to speak sense. She once confessed to this reporter a few years ago during an interview that she was still working on her German, but her English and Filipino were “all right.”

Her elderly father, who was based in Palawan, had just passed away a few days earlier. But like a real pro, she showed up with fellow Binibining Pilipinas winners (Wurtzbach was first runner-up during her first try) Ariella Arida and Miss International 2013 Bea Rose Santiago for the interview and photo shoot.

Since her mom hails from Cagayan de Oro, Wurtzbach is also fluent in Cebuano. It was probably her facility with languages that got her into trouble in 2014 during her second attempt to bring home a Binibining Pilipinas crown.

Sen. Sonny Angara had asked her during the make-or-break question-and-answer portion, in the spirit of nationalism and perhaps as a way of testing her, if she could really speak Filipino despite her unusual last name, to answer him in the vernacular.

Wurtzbach gamely did, and with panache. But when she was about to translate her answer to English, she ran out of time and was unable to relay her message across to foreign judges, who comprised almost half the panel that year. Pageant observers blamed her defeat on her decision to answer in Filipino.

She later told this reporter that she felt numb on stage all the way to the dressing room.

“As soon as the gravity of the situation had sunk in, I wept,” she said.

She said she had no plans of joining Binibining Pilipinas again when we bumped into her sometime later. But the lure of eventually winning a crown was probably too great that we weren’t surprised to see her change her mind a few months later.

Her sister, who flew to Las Vegas to watch her compete, and mother are now based in London. Despite the distance, she shared in interviews that she communicates regularly with them. She took up culinary studies in the Philippines, and once worked as a junior chef in a London restaurant.

“I love to cook,” she once said. “But I miss the local scene. Being here is where I’m happiest. Indeed, it’s true when they say it’s more fun in the Philippines.”

She also learned makeup and styling by herself and by asking tips from pros during photo shoots. In fact, before she became too busy with preparations for Miss Universe, Wurtzbach used to contribute as writer and guest stylist for this paper’s Lifestyle section.

Although Wurtzbach wasn’t as close to her dad as she is to her mom, she still holds a special place in her heart for the old man.

“The day she signed her application papers for Miss Universe was also the death anniversary of her dad,” her best friend, Nina Almoro, said. “She had a premonition that her dad would help her win Miss Universe. She would like to offer her crown to her family and close friends who became her second family in the Philippines.”

“She was so determined to win that she entered Binibining Pilipinas without telling Almoro, who wasn’t too keen on it at first,” said Albert Almendralejo, an events planner and publicist who was in Las Vegas. “Even Nina’s family was against it. Pia stayed with them for a time before she decided to move to a condo near Araneta Coliseum, home of Binibining Pilipinas.”

As boos and jeers from members of the Latino audience got lauder inside Planet Hollywood’s Axis Theater, they were eventually drowned out by cheers from Wurtzbach’s Filipino supporters, said Almendralejo.

“I felt calm when I was called first runner-up because I felt it was fate, but when they announced I was Miss Universe, I had mixed emotions,” she told journalists. “I was happy because I really wanted to win, but felt sad for Miss Colombia. I even tried to approach her, but we couldn’t get near each other because she was surrounded by the Latin American delegates.”

“I won Miss Universe based on the judges’ votes. It wasn’t as if I took the crown from her,” she said. “But I still plan to talk this out with Miss Colombia when things have settled down.”

When she left Manila, she was asked by a reporter what was on her mind. “All I was thinking were the colors blue and silver, which are the colors of the Miss Universe crown,” she said. “Winning Miss Universe is my Christmas gift to all Filipinos.”

These were the colors of her much-talked about gown during the Miss Universe finals, a figure-flattering “serpentina” number with beadwork and ornamentations at the back by Filipino designer Albert Andrada.