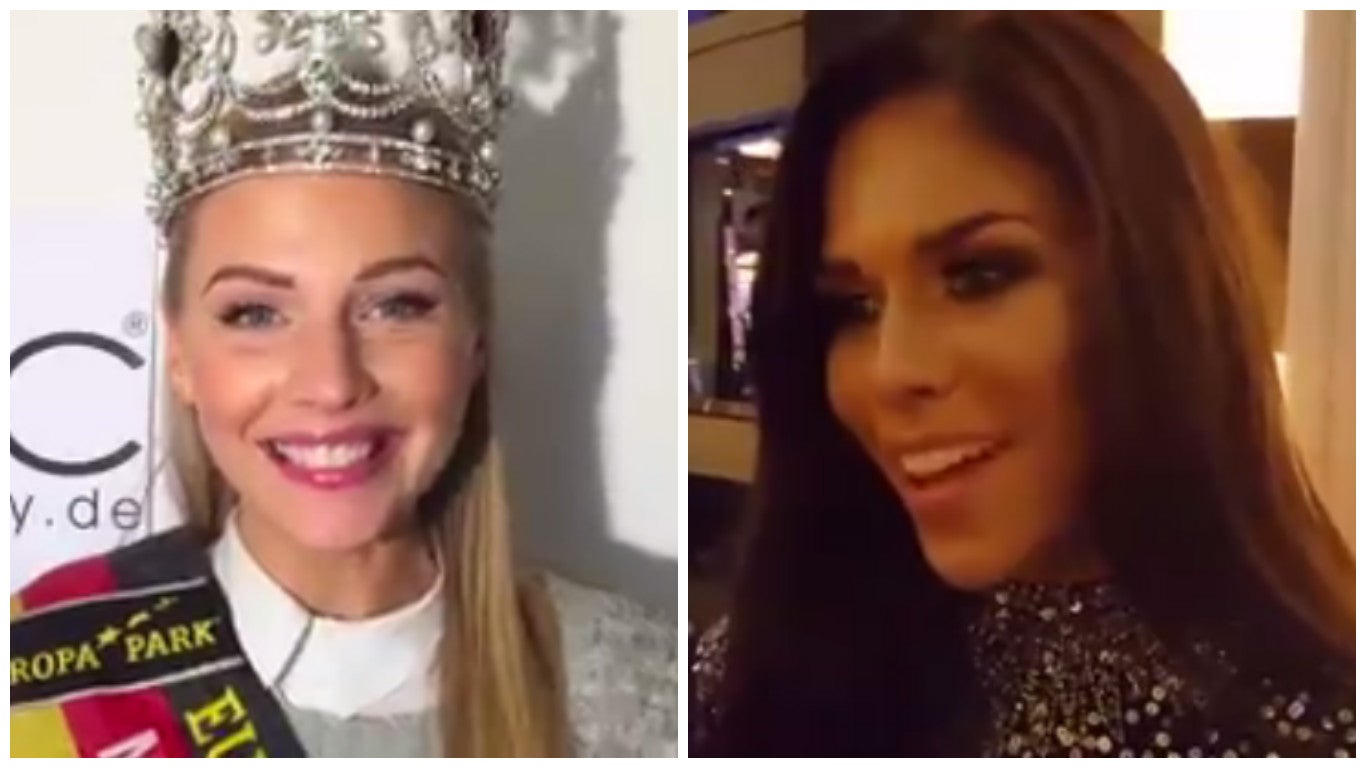 A TALE OF TWO MISSES GERMANY. Miss Germany Olga Hoffman (left) says she is a fan of Pia Wurtzbach, while Sara-Loraine Riek says none of the other contestants voted for Wurtzbach. SCREENGRABS FROM VIDEOS ON HOFFMAN AND MISSOSOLOGY'S FACEBOOK PAGES

A case of mistaken identity.

Olga Hoffman, Miss Germany 2015, has become the target of online  bashers after another beauty queen reportedly spoke ill of the newly crowned Miss Universe Pia Wurtzbach of the Philippines.

Riek received a lot of flak after she said none of her fellow candidates voted for Wurtzbach to become Miss Universe. She was interviewed after the pageant host mistakenly declared Miss Colombia as the winner, only to retract his announcement a few minutes later. Wurtzbach was eventually crowned Miss Universe.

“Being a great fan of Pia myself, I understand all of you completely. Let us point out that we are not connected in any way to Miss Universe Germany Sarah Lorraine Riek or the organization she represents,” Hoffman said in a video she posted on Facebook.

“We understand the disappointment of fans of Pia caused by the statement released by Miss Universe-Germany Sarah Lorraine Riek,” she said.

Hoffman had good words for Wurtzbach after the Miss Universe fiasco.

“My Filipino fans and friends, in behalf of the Miss Germany Corporation, we congratulate Miss Philippines on winning the Miss Universe 2015 Crown,” Hoffman said.

“Indeed, she deserves the title and we are proud of what she has accomplished, not only because Miss Universe Pia Alonzo Wurtzbach is actually half German but most importantly she embodies the spirit of a true beauty queen,” she explained.

Despite having nothing to do with the controversy, she said she and her team felt sorry “for the frustration this incident has brought to so many people.”

“To Pia and all my friends and fans in the Philippines. Mabuhay at mahal ko kayong lahat,” Hoffman said at the end of her video.

Some netizens thanked Hoffman for her statement.

“This is the real Miss Germany 2015, the beautiful Olga Hoffmann. The other one is Miss Universe Germany, the bitter Sarah Lorraine Reik,” one commenter said.

Another one apologized to her for the bashing she received: “Hello, Olga. On behalf of Filipino fans, I would like to apologize for whatever stress this may be putting you through. We are very passionate about our beauty queens, and it is just unfortunate that a few rotten apples are causing other people (such as you) unnecessary grief. Please know that the majority of us respect you, and the pageant which you represent, and we wish no ill-will. Again, please accept my apologies.”