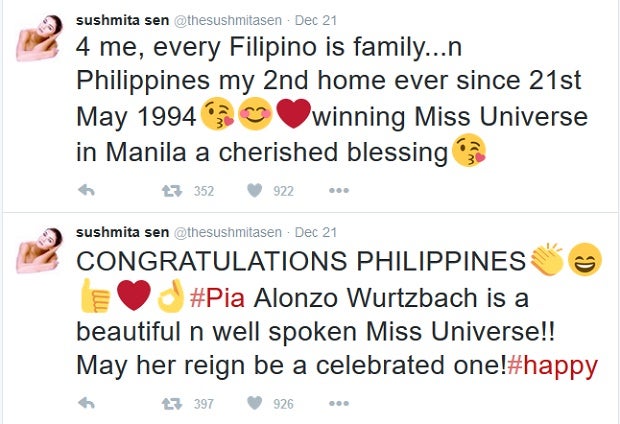 Former Miss Universe winner Sushmita Sen had nothing but goodwill for the Philippines as she congratulated the new Miss Universe Pia Alonzo Wurtzbach.

Sen on her Twitter account posted, “Congratulations Philippines. Pia Alonzo Wurtzbach is a beautiful n (well-spoken) Miss Universe!! May her reign be a celebrated one!”

The Indian actress became popular among Filipinos after she won the crown for the Miss Universe, which was held in the Philippines in 1994.

“For me, every Filipino is family…and Philippines (is) my 2nd home ever since 21st May 1994. Winning Miss Universe in Manila (is) a cherished blessing,” she added.

Sen said she was on a flight to Dubai when the pageant was aired live and had to watch it much later.

Before Wurtzbach was crowned, host Steve Harvey mistakenly announced Miss Colombia as the winner. This resulted in an awkward moment for the two beauty queens as Wurtzbach was asked to step forward while Ariadna Gutierrez had the crown taken from her.

Wurtzbach was reportedly a frontrunner for the pageant. She especially stood out after the question-and-answer portion when she said, “I want to show the world, the universe, rather, that I am confidently beautiful with a heart.”

Sen, like Wurtzbach, gave a memorable answer during the 1994 pageant.

After her Twitter post congratulating Wurtzbach, she replied to a Filipino fan who said, “We miss you too. Filipinos can still recite your final answer by heart–we’ve forgotten everyone else’s. You’d be amused.”

“Such is the power of the ‘essence of a woman.’ Beautiful question,” Sen replied. KS