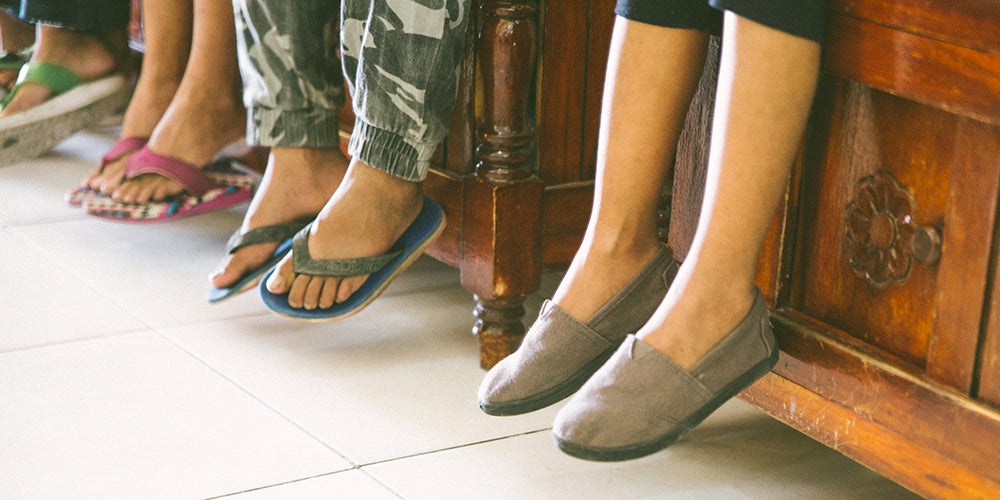 These shoes go a long way

They call it a shoe drop but it’s more than that; it’s a long process of really connecting with the kids,” said Ayet Quimpo, marketing manager of TOMS Philippines.

On a bright Wednesday morning we were riding a bus headed to Children International Philippines in Batasan Hills, Quezon City, for one of TOMS’ Giving Trips.

For years, since Blake Mycoskie started the company in the United States in 2006 and Swim Philippines Inc. president Dimples Balaguer-La’O brought the brand to the Philippines, we had heard about TOMS’ unique One For One business model: giving a pair of shoes to a child in need for every pair sold.

We had seen videos, heard stories, read articles about it. But this time, it was going to be different. Because we weren’t just going to witness it happen, we were going to be a part of it.

“Welcome, visitors!” the kids of Children International greeted us cheerfully, placing beads around our necks.

They are just some of the many children—17,000 in the Philippines—supported by the nonprofit child sponsorship organization. The Children International community center we were visiting is the biggest in the country and attends to the needs of 4,700 sponsored children.

That day, we were going to meet 300 of them, 7 to 11 years old. And we were giving them new pairs of shoes. Children International, which has been helping children rise out of poverty for 75 years now, has been a giving partner of TOMS since 2014.

We toured the spacious Betty Lou Daul Center, named after the wife of Ron Daul. When Betty passed away, Ron made a significant donation to build the facility in memory of his wife. We stopped by the dental and medical clinics where the children are required to have regular checkups, and the well-stocked pharmacy where they can get medicines they need free of charge.

Inside the children’s library—open to both sponsored kids and children of the community—student volunteers were holding a storytelling session, reading from a book about table manners. The library is also a venue for creating arts and crafts projects and video screenings.

At the computer room, children were sitting quietly, concentrating on the screens of their monitors. Jeffrey Mark Santos, who has been working for Children International for 16 years, explained that a tie-up with Intel has made it possible for children to learn computer skills.

The Intel Easy Steps Digital Literacy Program includes modules for different ages—from learning how to use the Internet and e-mail, to multimedia and online marketing lessons. Ten students get to learn basic computer skills weekly.

Outside, by the playground, parents and kids have gathered for a Planet Water session where they are taught the proper way to wash their hands. Trained staff, who are sponsored kids themselves, give their peers tips on good hygiene. Supplies are given out, too, including soap from Clean The World.

Upstairs, in the nutrition and feeding room, beneficiaries of the supplemental feeding program run by nutrition volunteers are waiting for their meal. The day’s menu? Pancit palabok with egg, tasty bread and watermelon shake.

After eating, the kids get to rate their meals in a food evaluation survey. Around the room are educational materials on proper nutrition donated by students from the University of Santo Tomas.

“Are you ready?” Dimples asked, a big smile on her face.

It was time to experience giving with TOMS.

Step one is measuring the kids’ feet and giving them a stub with their size on it. The stubs are traded for pairs and then it’s time for the best part: helping them try on their new shoes for the first time.

“Talk to the kids, look at them, giving should have a personal touch. It’s the TOMS way,” said Ayet.

I sat on the floor as kid after kid occupied the chairs in front of me. I measured their feet and called out their sizes. I helped them slip off their old slippers or sandals or shoes, sometimes their socks, and guided their feet into their new TOMS, checking if the size was right and if their pair felt comfortable.

It was magical, seeing their eyes light up as they wore their new shoes. One little boy was so giddy he couldn’t stop beaming. For me, being part of the process felt like a gift.

And the most beautiful thing about it is that it’s a process which happens and will happen every six months until the kids turn 19 years old—TOMS doesn’t give just one pair per child; the company commits to providing shoes as their feet grow, giving their parents’ one less thing to worry about.

A number of children had shown up wearing their old pairs of TOMS and I was moved by the sight of them. I wondered about the impact those pairs have had on their lives, where they’ve taken them and what adventures they would have with their new pairs.

I had goosebumps as some of them talked about how they’ve given away the pairs of TOMS that they’ve outgrown, paying the kindness forward to a sibling or a neighbor or a cousin or a friend.

After claiming their shoes, the kids were sent to a waiting room for another surprise. A week or so before the Giving Trip, TOMS held a Giving Fair where people, including volunteers from Kids for Kids, built handmade toys for the kids of Children International. These tic-tac-toe sets were placed inside boxes that also included a personalized canvas bag, with each child’s name written in calligraphy, plus chocolates, candy canes and other treats.

Armed with lists and organizational skills, we had fun matching the kids with their boxes. They broke into big smiles as they saw their names written with flourish. “Thank you,” they said. “Merry Christmas po,” some of them added.

We headed to the youth room to have lunch with Children International’s Community Youth Reporters, young leaders who are living proof of how kindness and compassion can make an impact on someone else’s life. These sponsored kids have grown up to be articulate, driven, determined. They are now in college and are in the process of making their dreams come true.

They showed “My Way To School,” a short film they shot featuring Katherine, a 7-year-old girl sponsored by Children International. The video shows Katherine barefoot as she shares her tale of living in poverty, sometimes having to borrow old and broken pairs of shoes from neighbors just so she could go to school. The video ends on a positive note, showing how, thanks to TOMS, she no longer has to do that—she now has her own pair.

It was a touching film. Katherine’s mother, who was watching it for the first time, wept. We had to fight back tears, too.

We joined the children again downstairs. Dimples painted their faces with butterflies and tiger stripes, others made balloon hats, and we played the craziest game of catch ever invented.

Too soon it was time to say goodbye. And as we were leaving, a sweet little girl named Francesca ran to us and gave each of us big hugs. “Thank you po,” she said, her smiling, pretty face covered with face paint.

“Today was really special,” I told the group later as we reflected about the Giving Trip.

And now, every time I look down at the TOMS on my feet, I remember Francesca, I remember bouncing balls, I think of smiling faces and little toes sliding into brand-new shoes and how easy—and how good it feels—to give.

To find out how to volunteer, donate or sponsor a child through Children International Philippines, log on to http://www.childreninternational.ph.