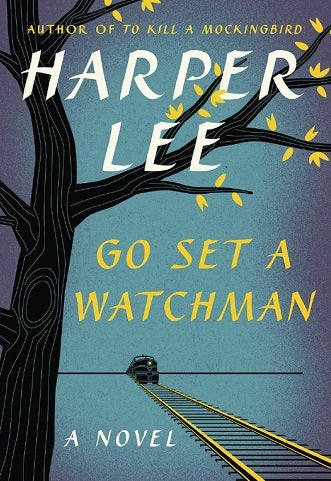 THE COVER of "Go Set a Watchman"

Harper Lee’s hero with rather repugnant feet of clay

Atticus Finch is the father of Scout, 6, and Jem, 10, from Lee’s Pulitzer Prize-winning novel “To Kill a Mockingbird” (1960). He is a man of integrity and moral high ground who treats men equally, regardless of the color of their skin or the money in their pocket.

It is Atticus who tells his tomboy daughter Scout: “You never really understand a person until you consider things from his point of view… until you climb into his skin and walk around in it.”

However, the Atticus whom Scout worships and looks up to, the lawyer who courageously defends someone who has been charged with the rape of a white girl just because of his dark color, is different from “To Kill a Mockingbird.”

“Go Set a Watchman” was written in 1957 but was rejected. Lee’s publisher asked her to rewrite the novel from a child’s perspective. It is said to be the first draft of “Mockingbird.”

After the publication of “Mockingbird,” Lee said she would not publish another novel and retreated from the limelight. The manuscript was lost until it was discovered in a safety-deposit box by Lee’s lawyer in 2014.

Bigot at the start

Set 20 years after “To Kill a Mockingbird,” Scout, who goes by her real name Jean Louise, arrives at Maycomb, Alabama, from New York City.

Jean Louise, who is recovering from her brother’s death, is visiting her ailing 72-year-old father. She finds herself in the midst of her hometown’s resistance to the Supreme Court ruling in favor of school integration of White and Negroes.

To her surprise, Atticus and her childhood friend and sweetheart Henry are part of the Maycomb County Citizens’ Council that opposes the civil-rights movement in Alabama.

In “Go Set a Watchman,” Atticus is resisting to give the Southern Negroes full civil rights to avoid Reconstruction. He explains to Jean Louise that Negroes in the South, who are mainly agricultural folk, are not yet ready for such change because “Negroes down here are still in their childhood as people.”

Giving full civil rights to the Negroes, who comprise 95 percent of the population in Alabama, will bring forth a catastrophic shift in the federal government.

Jean Louise, as well as readers, feel betrayed upon realizing that her “most potent moral force,” her father, who has raised her colorblind, is a bigot.

This revelation is no surprise to some scholars, claiming Atticus has been a bigot from the beginning of Lee’s first novel.

In “The Courthouse Ring” published in The New Yorker on Aug. 10, 2009, Malcolm Gladwell wrote: “[Atticus Finch’s] hearts-and-minds approach is about accommodation, not reform.”

Gladwell, a Canadian journalist and best-selling author, said that, contrary to popular belief, Atticus was not a civil-rights hero. He described Atticus as an “old-style Southern liberal,” who sympathized with the plight of black people but was not willing to pursue racial equality in the “island communities” of Alabama.

Atticus is the regular Southern conservative. In “Go Set a Watchman,” Atticus is, according to Jack Finch, “reduced to the status of a human being,” brought down from his pedestal as the moral high ground, because he is human. He is no longer seen from the perspective of an “overcalled, fractious, gun-slinging” child, but a “reasonable facsimile of a human being” that is Jean Louise. In fact, Atticus is based on Lee’s father, a lawyer and member of Alabama State Legislature.

“Go Set a Watchman,” which sold over one-million copies in one week after its release, is about the death of innocence, both for Jean Louise and the readers. This novel is a painful reaffirmation of the message of “To Kill a Mockingbird” that justice is selective.

The moral disagreement between father and daughter is the turning point between Atticus and Jean Louise, who becomes her own person, not just daddy’s girl.

Jean Louise listens to the voice in her head and finds her own watchman: “I need a watchman to lead me around and declare what he sees every hour on the hour.” She finds out that a person’s watchman is her own conscience.

As Atticus says in “To Kill a Mockingbird”: “The one thing that doesn’t abide with the majority is a person’s conscience.”

In the emotional turmoil of coping with the death of her brother and the moral disagreement with her father, Jean Louise learns to accept that every man is an island.

She bids farewell to her closest friend, Dill Harris, who has lived overseas since the end of World War II, as well as the family’s Negro cook, Calpurnia, her closest mother figure while growing up.

The narrative is full of poignant flashbacks of Jean Louise’s childhood in the sleepy town, which will move readers to tears and remind them of the bittersweet adventures of Jem, Scout and Dill.

It is a painful realization for the reader that the stories from her childhood will remain in the past and the only way to go is to move on, and carry on what her conscience dictates.