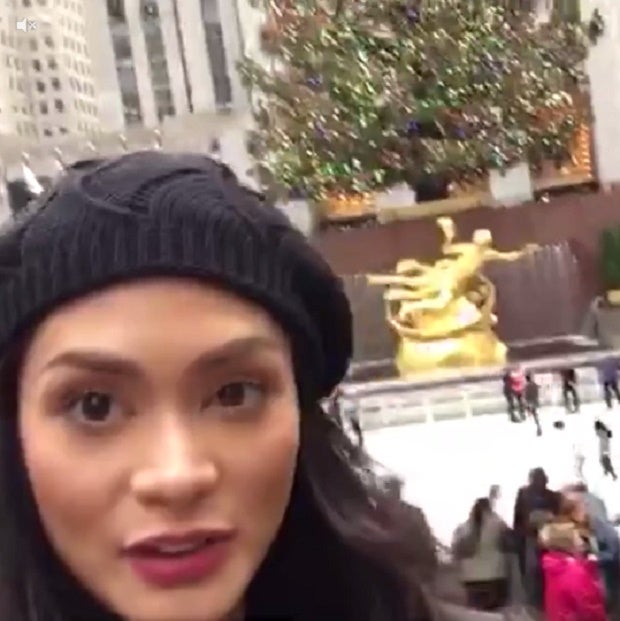 Miss Universe 2015 Pia Alonzo-Wurtzbach posted a Christmas video on Twitter giving her Yuletide greetings all the way from New York.

The newly-crowned queen flew to visit the Big Apple right after winning the controversial Miss Universe tilt in Las Vegas.

This year’s pageant put to an awkward spotlight Wurtzbach after host Steve Harvey wrongly announced Miss Colombia Ariadna Gutierrez as the queen. Harvey later corrected himself and said it was the Philippines’ bet Wurtzbach who was the queen. Gutierrez was decrowned on live television.

On the video posted on the official Miss Universe Twitter account (@MissUniverse), Wurtzbach expressed her awe at seeing a huge Christmas tree at the Rockefeller Center. It was her first time to visit the Big Apple.

“I’m here now at the Rockefeller Center to look at the huge Christmas tree!” the 26-year-old beauty queen said.

Wurtzbach greeted her almost half a million followers with a Filipino Christmas greeting: “Maligayang Pasko.”

“Maligayang Pasko! That’s Merry Christmas in Tagalog. I hope everyone is having a good time with their families. #MissUniverse -Pia,” Wurtzbach wrote on a post that accompanied the Vine video.

Wurtzbach, a former model and actress of Filipino-German descent who was raised in Cagayan De Oro City, posted more photos on the Miss Universe Instagram account of her Christmas break in the Big Apple.

READ: How Did Anne Curtis, Pia Wurtzbach and All Your Fave Celebs Spend Christmas?

Wurtzbach had pleaded for the netizens, particularly bashers online, to move on from the controversy and told the decrowned Miss Colombia that she is “beautiful inside and out.” Meanwhile, Gutierrez congratulated Miss Philippines and said she has accepted her destiny. RAM

READ: Miss Universe Pia Wurtzbach to Miss Colombia: ‘You are beautiful inside and out’