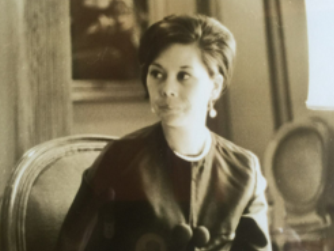 Although our parents had been good friends for years before I was even born—and I had memories of seeing her at her late father Col. Nick Jimenez’s famous birthday parties—Letty Jimenez-Magsanoc and I didn’t become friends until 1987. And that was only because I had the temerity to “correct” what a veteran journalist had written.

It was 1987, and Letty, then editor of the Sunday Inquirer Magazine (SIM), had taken my brother to task after his failed coup attempt against the Cory Aquino government.

One installment of her column, “Leavings,” was entitled “The magnificent Honasan,” and presented a hypothetical scenario which had my late father—a retired colonel like her own dad—shaking his head in disappointment at my kuya’s shenanigans.

I was a year out of college and working in advertising, and in a moment of righteous indignation, wrote my own version of the column in defense of my brother, and dropped it in the Inquirer’s then Intramuros office (this was before fax and e-mail, you see).

She didn’t ignore me, and didn’t print a nasty reply, as she had every right to do. Instead, Letty printed my version in full, and in what was my first taste of her generosity, wrote, “Alya, you’re one hell of a writer. Greg is blessed to have you on his side.”

The magnanimity didn’t end there; to my disbelief, she sent word to me, somehow, that she wanted me to write for the Inquirer.

How can such a gracious invitation not change your life? I did decide to take the leap and become a writer, and I wrote (and still write) for the Inquirer, for many years and through several stints, both as a contributor and as an employee, my longest gig being 10 years with SIM.

If you had told me years before that I would someday take over Letty’s job, I would have laughed in your face.

But that’s what happened. As editor of Saturday Special, and later, of SIM, I realized that I had a guardian angel, a confidante, a guru of the highest order. Letty helped build my career, mentored my writing as well as my decisions and attitude, and became one of the main reasons I have remained a writer, and have learned to love my work with a passion.

During one of my very first assignments interviewing a bag designer, the lady sent me off with an expensive-looking gift. I had to call Letty to ask worriedly if it was okay, and she laughed heartily on the phone—the first of many, many times when I would hear that laugh, and everything in my world would be all right. “That’s fine, as long as it’s not a check. That’s good, that’s good.”

Later, she would tell me the “good” part was because, she had noted with pleasure, I apparently had a functioning conscience.

Letty praised (“I LOOOVED what you wrote”) as easily as she criticized. “So what? How booooring,” she’d say matter-of-factly of a story idea that didn’t quite catch her fancy—but somehow, you always knew it was coming from a good place.

No matter how the paper’s deadline was bearing down on her, Letty never uttered an unkind word—except to tell me when I was getting fat, or if I looked haggard, and she was usually right, anyway.

It evolved slowly, but inevitably. Letty became my benchmark, the kind of journalist I wanted to be—sharp, straight and always cognizant, even respectful, of the heart in every story.

I would freak out over how she could still spot my uncrossed t’s and bad sentence construction after a day of breaking news, and still manage to tweak a head, or a lead, until it was 200 percent better, more engaging, more effective.

I resolved to grow up and become like Letty Magsanoc. I figured, if she approved of what I was doing in the magazine, then everybody else’s opinion didn’t matter a whit.

I would find myself visiting her late Thursday nights in her office after both SIM and the newspaper had been put to bed, and after a brief post-mortem, she would put her editor cap aside.

We would talk about everything and anything, from her early days as a writer, to how she couldn’t meditate because it always made her feel like she was falling—control issues, we concluded—and how, to my dismay, she wasn’t crazy about dogs, having been attacked by a Dalmatian once during her regular walks around her village.

But mostly, she listened. She asked about my career plans, my love life (or lack thereof, which alarmed her), my fears, my family problems, my dysfunctions. I’ve forgotten how many times I’ve cried in her office while she shuffled back and forth between summoning the copyboys and holding my hand. After dispensing advice, she always promised to pray for me, especially to St. Thérèse of Lisieux, of whom we were both big fans. (I prayed to St. Thérèse for her, too, whenever I heard she was ill or under the weather.)

And we laughed, usually over red wine and Gouda cheese. There was nothing in the world quite like Letty’s laugh—low, throaty, what my theater director would describe as a cognac-and-cigarettes kind of laugh. When I returned to Inquirer in my current incarnation, as a contributing desk editor for the Lifestyle section, I often kidded her about it being more of a comforting cackle than a regular laugh.

When something was really funny—pretentious people who made fools of themselves would really crack her up—she would laugh herself into a coughing fit, tears in her eyes.

Her prayers for me went into high gear when I was diagnosed with breast cancer in 2013. I felt like an adopted Magsanoc; her daughter Kara, also a dear friend, a breast cancer survivor and founder of ICanServe, guided me through the struggle. Her son Marti was my radiation oncologist, and Letty herself never ceased to make her presence felt.

I remember crying (again) one night in the office about how some people I had depended on didn’t step up during my illness. “Everything happens for a reason,” Letty said, a line she shared with many of us. “Even the falling of a leaf.”

A couple of weeks later, during a difficult five-day hospital confinement after my breast was infected, a lovely flower arrangement arrived. “Even the falling of a leaf…,” the card read. “A reminder from Letty with love.”

When I was cured, she proudly showed me a  laminated (!) list of names of cancer survivors she prayed for, and my name was there. “But you’re okay now, so I can take your name off the list so I can pray for somebody else,” she informed me gleefully.

I could wallow in my memories of time spent with Letty, when I was privileged—with many others, for her heart was big enough for all of us—to have shared a meal, a celebration, a moment of pain or delight with this extraordinary woman.

As I write this, I’m still staggering at the enormity of what we all—her family, her friends, the newspaper she built, the lives she changed, the country and people she served—have lost.

The idea that I’ll never hear that raspy voice or that otherworldly cackle again just rips me apart. The newspaper, the industry she loved so much, and all of us who loved her—and whom she unabashedly loved back—have been irreparably gutted.

But I do still hear you, Lets. Even the falling of a leaf happens for a reason. Maybe now, that reason eludes us, we who wonder why you left too soon, when there was much more you could have done and enjoyed, when we weren’t ready to let you go—not by a very, very long shot.

Someday, though, with faith, that reason will become clearer to us, and will fall into place in the greater scheme of things, in the grand plan of the God that you loved and trusted so much.

Someday, I will remember only the beautiful parts when I think of you, when I’m writing a good story or sipping a fine cabernet. And in the most treasured memories of my heart, where I hold those I have loved most in my life—dearest Letty, I will always hear you laugh.