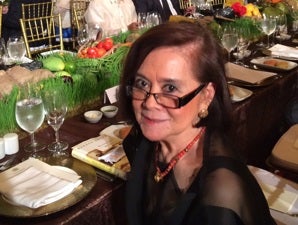 Ma’am Letty was like Gandalf, but not because she had much white hair.

Just like the beloved wizard of J.R.R. Tolkien’s “The Lord of the Rings” saga, the Inquirer editor in chief used motivation to make people do better and achieve more than what’s expected of them.

She wasn’t stingy with compliments and thank you’s, either. In an industry where you often hear people say, “This is a thankless job,” here was a woman who knew better than deny acknowledging a job well done.

It didn’t matter your designation—top executive, editor, proofreader, company driver—and even if you were just doing your job in the first place, you’d hear encouraging words from Ma’am Letty.

She had spunk and charisma, a combination that served her well in situations when, even in a roomful of reporters and editors, only she could blurt out the truth or ask the most hardline questions of anybody, any subject, any public figure who dared show up hoping to be mollycoddled.

My favorite of Ma’am Letty’s Gandalf-like qualities was that she didn’t let her station—in the newsroom or in life—affect how she interacted with the people around her.

LJM was a Big Boss with a vast network of friends that included very powerful individuals, but she exuded none of that privilege or sense of entitlement. She drank vodka from the same shot glass passed around during the annual editorial Christmas party. She’d greet you hello if she caught up with you on the lift, or say goodnight before heading home.

Gandalf, if you recall, had great powers—but who did he love hanging out with the most? The Halflings!

LJM worked her magic in the newsroom, too. If you ask me how I feel about no longer having this amazing woman around, I’d say it feels like when Gandalf the Grey fell into the abyss after the battle at Moria—snatched away all too sudden, and all too soon.