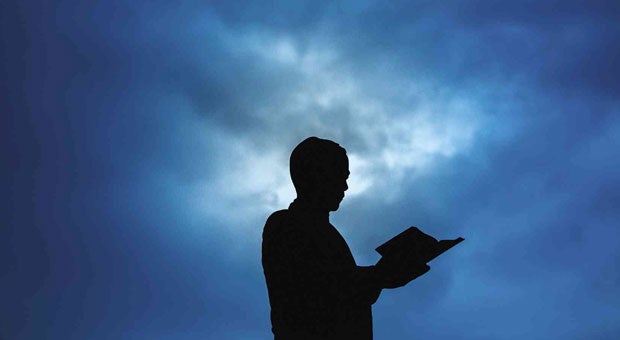 For more than a century now, Filipinos have been told of the life of Jose Rizal, especially his last 24 hours, his execution and his last poem, “Mi Ultimo Adios.”

Late afternoon the day before his execution, Rizal was visited in Fort Santiago by his mother, four sisters, and two nephews. Rizal bequeathed to his sister Trinidad—so the story goes—a small alcohol lamp.

He told Trinidad in English, so the guards would not understand, that there was something inside the lamp. That something turned out to be a small paper measuring 9.5 by 15 centimeters, written on both sides and folded several times for insertion in the lamp’s fuel tank drained of its alcohol content.

The writings were an undated, untitled and unsigned poem of 14 five-line stanzas in elegant Spanish, which we know now as “Mi Ultimo Adios,” Rizal’s beautiful and world renowned poem.

Think of Rizal and “Mi Ultimo Adios” and the mind conjures the image of Rizal writing the poem by the light of an alcohol lamp. This is illustrated by a painting of Rafael del Casal that hangs in the Rizal Room of Ateneo University library.

That beautiful image, however, is unreal because alcohol does not burn with a luminous flame. Moreover, the alcohol lamp is not a lamp but a small stove (cocinilla in Spanish) for warming and cooking food.

The cocinilla was a gift of the mother of Dr. Trinidad Pardo de Tavera. It was brought to Fort Santiago at Rizal’s request for him to warm his food.

If you do not believe that ethyl alcohol does not burn with a luminous flame, try this experiment—buy a kerosene lamp and fill the fuel tank with alcohol. Then light the wick in a dark room at night. The light you will get is insufficient for writing.

It is important to mention that people have had electricity since 1895. During that time, people used a small kerosene lamp, called quinke, for night lighting.

For ethyl alcohol to burn brightly as in commercial alcohol lamps, it has to use the Welzbach incandescent mantle, a cotton packet impregnated with 95 percent thorium nitrate and 1 percent cerium nitrate. When the alcohol flame hits the mantle, a bright white light glows.

This is the lighting principle used by fishermen at night. Commercial alcohol lamps were sold in Manila about 1910 more than a decade after Rizal’s execution.

Biographies and articles about Rizal perpetuate the myth of Rizal’s lamparilla.

Almost all the biographies of Rizal repeated the alcohol lamp lie, although sometimes the terms alcohol burner and alcohol cooking lamp were used.

There were other writers who correctly pointed out that Rizal’s alcohol lamp was a stove.

Historian Jose P. Santos, in his review of Russell and Rodriguez’s “The Hero of the Filipinos,” stated that the book erred in using the term alcohol lamp when it was actually an alcohol stove.

That Rizal’s alcohol lamp was actually an alcohol stove revives the question on the authenticity of the so-called original “Mi Ultimo Adios” manuscript in the National Library.

How this copy came to the possession of the National Library was related by Ambeth Ocampo in his book, thus: “In 1908 when the Bureau of Insular Affairs in Washington informed Manila that an ‘American traveler in Asia claimed to have a manuscript of ‘Adios,’ and was willing to part with it for $500, then Executive Secretary F.W. Carpenter called Trinidad Rizal to authenticate the manuscript … She declared it was the same one in her possession before it ‘disappeared’ in 1897.”

I would like to share with the readers an experiment I did with the Rizal cocinilla in the Rizal Room of Ateneo University library, which will shed light on the authenticity of the original “Mi Ultimo Adios.”

Before experimenting, I looked at the facsimile of the “Mi Ultimo Adios” in Rizal’s biographies and compared it with a reproduction of the original supplied to me by Rosette Crelencia, who was in charge of the document.

I photographed a facsimile of the “Mi Ultimo Adios” in De Veyra’s book and cut it to the dimensions of the paper 9.5 by 15 centimeters containing the handwritten poem. I folded it three times, the same number of folds the so-called original “Mi Ultimo Adios” manuscript underwent.

I had the thrice-folded, simulated “Mi Ultimo Adios” manuscript photographed beside the orifice of Rizal’s cocinilla. The thrice folded paper could not fit the orifice.

Two more foldings were necessary for the paper to be inserted in the orifice.

The result proves that the so-called original “Mi Ultimo Adios” had not been inserted in the cocinilla’s fuel tank; thus, the manuscript in the National Library could not be the original.

The late Fr. Casal told me that Ambeth Ocampo does not believe the “Mi Ultimo Adios” in the National Library is the original but he never expressed this view in his Rizal books.

Jaime de Veyra, an ardent Rizalist, described the paper on which the “Mi Ultimo Adios” was written: “Era un pedazo de papel comercial ordinario con lineas azules … (It was written on an ordinary commercial paper with blue lines …) This description does not match the “original” manuscript which shows no blue line. De Veyra made a big error.

The “Mi Ultimo Adios” is a key element in the contentious subject of Rizal’s retraction of Masonry and his marriage to Josephine Bracken.