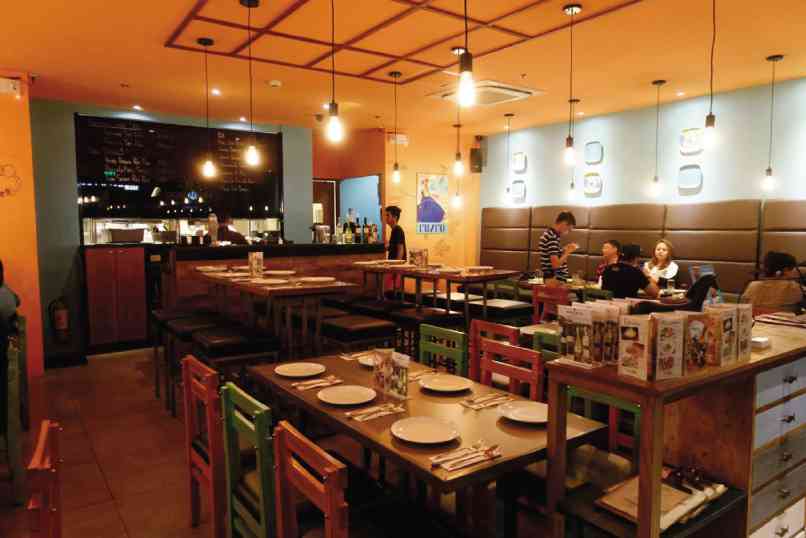 Feeling my way around Peruvian cuisine

It seems there has been a stealth attempt on the part of the latest global trend, Peruvian cuisine, to infiltrate our city; so stealthy, in fact, that it really hasn’t been on anyone’s radar.

There are two Peruvian restaurants in Quezon City: Mantaro and Don Andres. One is the splinter group from the other, though I don’t remember which, and both restaurants claim greater authenticity.

While I was working up the nerve to brave the Quezon City traffic, there was a bit of hype surrounding the opening of Nikkei in Legaspi Village, Makati. We made several abortive attempts to go, but it doesn’t accept reservations, and I’m too old for that sort of thing.

Meanwhile, there has been almost no hype about Cocina Peruvia in Bonifacio Global City; in fact, some foodies dismissed it as overly commercial.

I have to confess that I know absolutely nothing about Peruvian cuisine. I know that it exists in the same way that Peru exists and Peruvians must eat something; in scholarly literature there is always a reference to Peruvian ceviche as the “other” kinilaw. The rhetorical question is whether the one was influenced by the other. (Most scholars now believe they originated separately and both predated Spanish colonization.)

I also remember Peruvian cuisine being mentioned in my food anthropology classes as being one of the most creolized cuisines, along with that of Belize and the Nonya recipes of Malaysia.

The flavors of Peruvian cuisine are continental European (Spanish, and also Italian and German) mixed with Asian (largely Japanese, but some Chinese), using a mix of Old World ingredients with indigenous (so-called New World) ingredients: maize or corn, peppers, potatoes.

White people have gone gaga over this exotic new fusion cuisine in New York and London, but it seems to be a bit of a damp squib in Manila. The most cynical explanation but the one that comes to mind first is that it simply is too much like Filipino cuisine, which is also a product of very similar culinary confluences, except that technically, our cuisine is not creole.

Like our intermarriages with different ethnic origins, Filipino cuisine doesn’t fuse foreign influences so much as swallow them whole. Filipino food is indigenous local cuisine with Malay and Chinese influences and a Spanish aspirational veneer. But they are all so intertwined that they did not mix in the way that other creole cuisines did, and simply developed over the years as an oddly coherent, if diverse, Filipino cuisine.

Lomo saltado is the standout entrée at Cucina Peruvia, a stir-fried dish with gravy that has flavors reminiscent of a Filipino bistek. It’s made of strips of tenderloin or sirloin, marinated in vinegar and soy sauce, then fried in butter in a wok and thickened in the manner of a stir fry.

At some point French fries make their way into the sauce, an unexpectedly delicious addition. The other standout dishes were the adobo Peruvia, made with pork belly and sliced thin, and the costillas a la parilla. Grilled beef heart with chimichurri sauce was also a winner.

I was less impressed with the ceviche, though I must admit to bias; I don’t know if these were less than excellent ceviches or simply not to my taste. After all, I don’t know what a good ceviche is, but I do have distinct preferences for kinilaw.

The same goes for everything I had at the restaurant. I simply have no experience of actual Peruvian food to compare it to, so I can make no comment about its authenticity. From the viewpoint of the average hungry person, though, I think that Cocina Peruvia offers a good meal at a reasonable price, with more hits than duds.

Thematically, by way of Peru, we make a brief detour to Nobu, who opened his first restaurant in Lima in 1973. The gleaming magnificence of the now-billionaire’s umpteenth branch is ensconced at the hotel that bears his name at the City of Dreams Manila complex.

I was invited to try Nobu’s Sunday brunch, and must make the disclaimer that I dined at the restaurant’s expense. I’ve been critical in the past about Nobu Manila, feeling that the name that had once stood for innovative and visionary cuisine was in danger of becoming just another luxury brand, in the way that Leica is now about lifestyle more than about technological innovation.

The Nobu brunch made every effort, and succeeded, in winning me over. Gone are the uppity airs, but very much present are old favorites. All the Nobu hits that we’ve loved, such as the shimaaji jalapeño, are available at the buffet, plus a lot more from sushi to okonomiyaki pancakes to grilled prawns and crab, cooked to order. Rock shrimp tempura and Wagyu beef are served by a roving waiter, at decently timed intervals.

Most importantly, for a Sunday brunch, it’s family-friendly. You don’t have to feel like a pariah bringing children into a restaurant; there are even discreet booths if your children are of tantrum age or so inclined. On the main dining floor, there’s a roving magician and a makeup artist who does face-painting.

The brunch goes for P2,800 per head (half-price for children), though there is a P4,500 option with unlimited Moët & Chandon and cocktails if you want to go that route.

I must admit that I wouldn’t have initially thought of going at those prices, but having sampled the dishes, now I can attest that it’s worth the money and I would go again as a customer.

It’s an excellent way of spending Sunday lunch with the family; and if you can resist the temptation of the dessert aisles, you can easily recoup your costs in Nobu-grade sashimi.