The Letty of our youth | Lifestyle.INQ ❮ ❯ 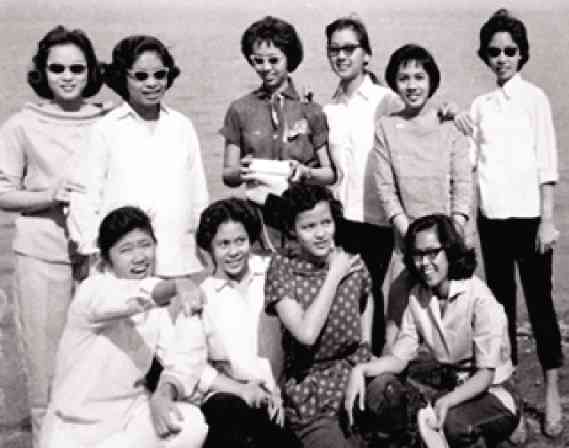 The Letty of our youth

I should have ordered the ensaymadas for Letty.

Dr. Chit Reodica and I should have set our lunch date with her two years ago, before the fall everybody thought she’d just walk away from.

Ah, the things we should have done but didn’t hop to— forever lost. But who’d ever have thought of someone like Letty going at all?

People like her aren’t supposed to die, and, in her case, not while at the helm, irreplaceably, of the nation’s most influential newspaper, not in a critical electoral season, not on Christmas Eve.

I guess one would never understand how randomly the Angel of Death picks who gets to go home and when. Her loss would doubtless be immeasurable, yet the bells tolled for her, not somebody else hanging by a thread, begging for it.

Letty and I were schoolmates at St. Theresa’s, both in high school (Quezon City) and in college (Manila). She was a year behind, but St. Theresa’s was an intimate campus, conducive to friendship.

After college we both married doctors and mixed in another circle, as doctors’ wives who were not doctors themselves, as most were. In that minority we formed yet another bond.

I was already separated from my doctor when Dr. Carlitos, Letty’s husband, treated me in the late ’80s. It was then that ensaymadas for Christmas from a non-paying grateful patient started coming to their home. I must have somehow defaulted, for, at a chance meeting, Letty mentioned missing my ensaymadas. I picked up where I left off, but left off again when an issue of propriety lent some awkwardness to the ensaymada gesture: I began working for her newspaper as a Sunday columnist at a new Lifestyle section called “S.”

The section boldly banners the words “sexy,” “stimulating,” and “sage,” implying them to be what “S” stands for, although by now, as it enters its fifth year, everybody knows S simply stands for “senior.” Thelma San Juan, the Lifestyle editor, told me that the senior section was Letty’s idea and that she herself picked the columnists, on Thelma’s suggestion presumably. Thus a new career for me had begun. Thank you, Letty.

Many of us from school lost touch with one another, but now, as we get on in years, the sentimental urge to reconnect has never been stronger. Not surprisingly, not a few of us have our own health issues, but the permanent loss of a contemporary like Letty comes too soon, and as one loss too many.

Friends from the past have come forward with recollections about Letty.

“We were a barkada of three in high school and college— Letty, Melinda Ramos and me. Sometimes Chit Noriega would join us. Other classmates, like Chit herself, went to other schools to be doctors or nuns; many went abroad. That’s probably why so few of us attend our class reunions at St. Theresa’s. After college the three of us left for the States, at about the same time. Melinda went to study at Georgetown, Letty at Missouri, and I went to New York not to study but to work at a Philippine National Bank branch. But somehow we always found time to get together.

“My fondest memories of Letty were in high school. She was the prefect of the Sodality of Mary, and when she learned Mother Norberte turned me down as a member for being mischievous and stubborn, Letty was furious: ‘That nun doesn’t know you like I do!’ I didn’t have the heart to tell her I really didn’t want to join, because of the early Masses and no breakfast before communion. She argued for me successfully, and that made her happier than me.

“In college, at recess, many of us spent our time making fun of teachers and talking about boys and other inanities. Letty spent her recess with Pilar, our classmate with crutches, holding her arm and walking her to the grotto to pray. Letty had always been religious and compassionate, but she’s also a lot of fun. We went to each other’s house to hang out and eat. We’d party with different groups of boys from different schools. In one party with boys from UP [University of the Philippines] came a handsome, mild-mannered medical student, Carlitos Magsanoc, who played bass in his friends’ band. He was obviously sweet to Letty, and we immediately liked him for her.

“We never lost touch despite the differences in our political inclinations. We saw each other’s babies when they were born, except for Kara, who was born in the United States, where Carlitos was going for his specialization.

“As an editor, Letty seemed to get better and better and more and more dedicated. She never left before the paper went to print. I was not surprised when she became the editor in chief of the Inquirer.

“She never stopped being religious. She also remained a generous and compassionate friend—she never refused me anything within reason and limits of propriety. It was in 1992, after a long conversation, that she found out I kept a journal of my experiences and the lessons I learned from them and convinced me to write for her paper.

“I did not know that she had been sick for two weeks and hospitalized. How she must have dreaded that, because we shared an aversion to hospitals and medicines in general.

“Whenever she had a sore throat or digestion problem, she would consult me rather than her doctor husband, since I lean toward alternative medicine, as much as possible. Every time she’d call, I’d remind her I didn’t know anything about medicine and persuaded her to ask medical doctors instead. She, in fact, had three in her family. This last time she didn’t call me. I don’t know if she realized how sick she really was.

“We had lunch not too long ago because she enjoyed vegetarian food, but she never said anything about her health. So I was really shocked when another classmate called me at home on Christmas Eve to tell me she had passed away. I don’t think it has sunk in yet; I don’t think it ever will.”

“In the early days at St. Theresa’s (Quezon City), the school population was quite small, and we easily made friends with everybody. We were like one big family. Even if I belonged to a class a year ahead, I would join Letty’s barkada—Melinda Ramos and Baby Valencia. We always had lots of laughs together.

“I remember visiting Letty in their house in Barrio Kapitolyo [Pasig] and meeting her parents. They were very strict, and Letty was always so conscious of the time whenever we went out. She made sure she did not stay out late. It looked to me she was her dad’s favorite—she always talked about him so fondly. She was always simple and quiet, unlike Baby Valencia and I, who were more outgoing. She took her studies seriously. At dismissal, the three Jimenez siblings would be waiting patiently for the army truck that picked them up from school.

“Letty and I had lost touch when I took up medicine at UST [University of Santo Tomas]. But one day, out of the blue, she called to congratulate me on my appointment as Secretary of Health by President Fidel Ramos.

“Last year, when I became president of the alumni association, I was in touch with her more often by cell phone, always inviting her to school and alumni events. But her reply always was, ‘My house physician has advised me to stay in bed.’ We’d eventually end up discussing her health condition. This was already after the complications of her fall had set in. We talked like old friends, and it was easy to forget she was editor in chief of the Inquirer.

“Last November 28 was the last time we spoke. She had put off another lunch date for until she felt better, which would never happen.

Melinda Ramos-Nieva sent this from New York: “Letty was always ready to go. I only hope Carlitos and the children will be all right.”

Cherrypie Villonco-Lazatin, another doctor’s wife and friend of 40 years

“I’ve known Letty for about 40 years, since my husband, Leo, and hers, Charlie, became colleagues at the PGH [Philippine General Hospital] and Makati Medical Center. Later on our daughter, Ciara, and her husband, Joey, became good friends with Letty’s son Marti. One evening they invited us to their home and out of nowhere Letty handed Ciara a painting and said, ‘I hear you like Baldemor. This is for you.’ It was so random, so spontaneous, so generous.

“On March 2015, I asked for Letty’s help to cover the state visit of the Grandmaster of the Order of Malta. She gave him half a front page the day after his arrival; it set the tone for the visit. Imagine getting such a grand coverage from the widest-circulated daily. I called Letty to thank her, and she said she was only too happy to help all good works.

“The last time we saw Letty was at Leo’s birthday in June. The children had prepared a game: One had to go to people they didn’t know to get them to answer a list of questions. She joined excitedly, approached strangers, and totally immersed herself in the spirit of the game.  We will always remember her dynamic spirit.”