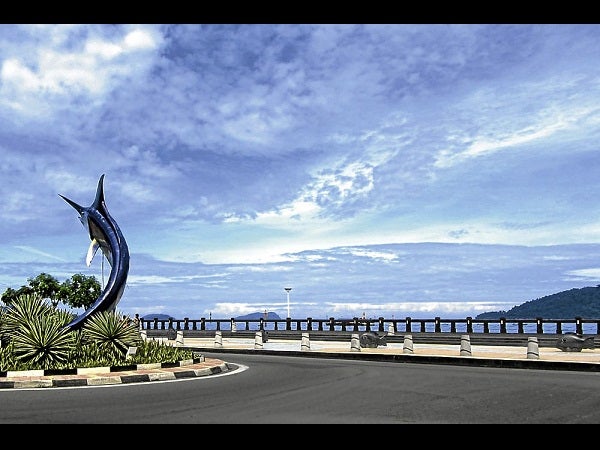 A backpacker’s adventure in Kota Kinabalu 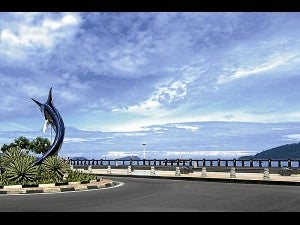 “Kota Kinabalu? Where’s that?!” A friend had asked when I’d told them where I was going.

Some of us might associate the Eastern Malaysian state of Sabah with the first season of “Survivor”—namely, Pulau Tiga island. But as far as infrequent flyers like me were concerned, Kota Kinabalu was definitely uncharted territory, and therefore, a choice destination for an adventure.

Together with fellow writers, I recently hied off to KK to take part in the annual Cebu Pacific Media Backpackers’ Challenge. Ten contestants were divided into teams of two, with each team named after a popular destination in Sabah. The Daily Tribune’s Deni Afinidad and I made up Team Kinabatangan, representing Malaysia’s river-region known for its lush wildlife.

The mechanics were simple: Visit as many places and do as many activities as you can with the least amount of money. Each team was given a budget of RM1,000 (about P14,000) to spend for three full days, including accommodation and transportation expenses. Canon Philippines also lent us their latest point-and-shoot and DSLR cameras to document our entire trip.

The kick-off point was at the Sabah Tourism Board, one of the last three surviving buildings from the pre-WWII era, and the “0 km” marker in front represented the point from which all distances in KK were measured. It’s right smack in the middle of Gaya Street, where a good number of reputable backpacker hostels and budget-friendly dining establishments were located, so it was a good area to start getting acquainted with the city. 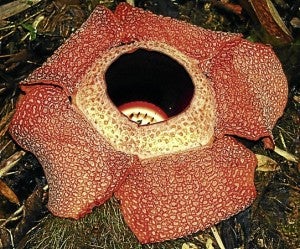 KK, I daresay, is a lot like Manila in many ways. Most of the locals either know a little Tagalog, or originally hailed from our country, so the language barrier doesn’t really pose a problem. After wandering for a couple of hours, we realized a lot of the tourist attractions were only accessible via taxi, ferry, or rented transportation, and that we’d only waste precious time learning how to commute.

We decided we were better off with a package tour, since it included a guide, meals and transportation. There were lots of tour operator agencies in Wisma Sabah building, just beside Gaya Centre Hotel (the official “home base” for the challenge). There, we met Mary Lopez, a KK-based Pinay who works for Only In Borneo Tours, and she gladly helped us maximize our limited budget and timetable using the available tour packages.

Because the weather was a bit unpredictable for island-hopping and beach activities, we passed up on Tunku Abdul Rahman Park (a cluster of five islands), Pulau Tiga, and diving hotspots like Sipadan Island in favor of more accessible tourist attractions.

While waiting, we reserved beds at a backpacker’s hostel in Gaya Street so we could unload our backpacks. We then took a quick taxi ride to the Sabah State Museum complex, located about 15 minutes from the city.

We booked the afternoon Klias River Cruise in Kuala Penyu, a two-hour drive south of KK. Aboard an 80-ft-long house boat called “Kunang-Kunang” (which means “fireflies”), we cruised down Klias River and tried to spot the proboscis monkeys among the trees. 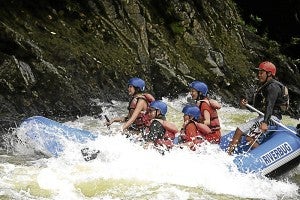 After a dinner buffet spread that included tasty grilled lamb chops, we tried our hand at fishing, where you can opt to have your catch cooked for you to enjoy or release  back into the river. Come evening, the lights on the boat were turned off for the “firefly show.” The soft twinkling scattered all around us made the whole swamp look like an upside-down night sky. Beautiful.

Our first stop of the day was white-water rafting in Kiulu River, about 1 ½ hours north of KK. Neither of us had tried any form of extreme sports before, but we were reassured that the river was “friendly” enough for first-timers.

Apparently, falling overboard was an unspoken rite of passage of sorts. When our raft “accidentally” capsized for the first time, it was such an exhilarating experience, and we came up sputtering and happy. But the second time, we slammed headlong into a wall of rock and the raft fell on top of me. The adrenaline rush was still there, but when half the river is in your lungs and the other half sloshing around in your sinuses, you couldn’t help losing your appetite for daredevil stunts altogether.

The two-hour tour ended with a free lesson on body rafting, which was basically floating face-up and letting the current take you downstream. This tour was hands-down the highlight of our trip, but at that point, I was only too happy to stay on dry land for the rest of our stay. 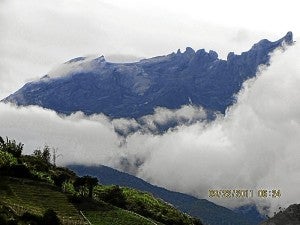 For the second tour, we set off for Mari-Mari Cultural Village in Inanam to check out where (and how) the five main tribes in Sabah had lived. We sampled authentic rice wine, fresh honey, and local delicacies like kuih jala (fried lacy crepes).

When we got back to KK, we set out to do a mini-food trip. We walked to  Handicraft Market (also known as Filipino Market, since many of the hawkers there are Pinoy) to try some local snacks, and had a late dinner near Kampung Air Night Market, a dampa/food court that serves every kind of local viand imaginable.

But the undisputed #1 item on our list would be Beryl’s chocolates, a local brand that everyone who’s been to KK is raving about and craving for.

Climbing the famous Mt. Kinabalu sounded very exciting, but a tour would take about two full days and we didn’t have the time, money or stamina for it at this point. We instead  explored Kinabalu National Park, Malaysia’s first Unesco World Heritage site, which was several hours away from KK by bus. We first visited the park’s Botanical Garden, where our tour guide showed us the world’s smallest orchid and other rare flora.

We were lucky enough to stumble upon a Rafflesia site, which wasn’t part of the actual tour. Giant Rafflesias bloom for only about a week and we were told they weren’t in season, but we couldn’t pass up the chance to see (and smell) a “corpse flower.”  We gladly paid a whopping RM30 each just to go through the tangle of trees and mud and witness a rare natural wonder.

The Canopy Walkway tour involved going up and down the foot of the mountain, which was pretty challenging for people like me who were chained to a desk 24/7. Good thing I’d packed my comfy Vibram FiveFingers shoes, which made the long trek a whole lot more bearable.

We would’ve loved to soak our aching joints in the Poring Hot Springs, but the tour bus had to leave for KK. And, just when we thought we’d never see the sunset or the peak of Mt. Kinabalu, the rain mercifully stopped long enough for us to enjoy a fleeting but precious glimpse of both.

With a total of 46 activities on a budget of around RM350, first place went to Team Kinabalu, made up of Manila Standard’s Joba Botana and Letsgosago.net’s Jonel Uy (whose team also got first place last year). They were awarded three open round-trip tickets per person to any international Cebu Pacific destination, plus a 4D/3N package to KK. Our Team Kinabatangan came in second, with a total of 55 activities on an RM945 budget, and we were each awarded two tickets to any international destination.

It was a close race, but in the end, we were all quite happy with our prizes; after all, no team went home empty handed. Considering this was our first time in KK, I’d say we experienced much more than what we’d actually spent for.

Special thanks to Cebu Pacific, Sabah Tourism Board, Tourism Malaysia, Canon Philippines, Stratworks, Mhay Rondael and Mary Lopez of Only In Borneo Tours.