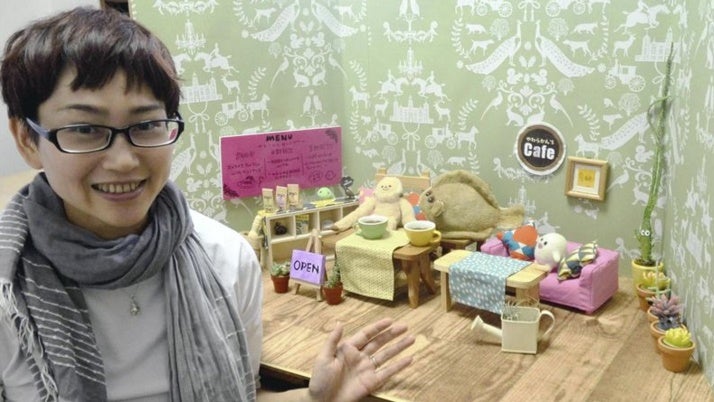 Kimiko Suzuki and her cafe for stuffed dolls. Photo by The Yomiuri Shimbun/The Japan News

JAPAN — A cafe where stuffed dolls entertain other stuffed dolls? Believe it or not, a cafe like this actually exists in Adachi Ward, Tokyo. Opened this summer exclusively for stuffed dolls, Yawarakan’s cafe is so popular it’s fully booked until the end of March. Inquiries have even come from overseas.

This unusual cafe is located in the atelier of a house. Its size of 60 centimeters high and one meter wide is suited for stuffed dolls, and it welcomes guests with a table and chairs as well as steaming coffee.

The “staff” of Yawarakan’s cafe (yawarakan is written in hiragana) are stuffed dolls in the shape of a flatfish and a monkey. They serve guest dolls for three days, during which time the dolls enjoy such things as eating an omelet filled with fried rice, playing a card game and getting into bed at night.

The owner can watch their stuffed doll have a good time online. After its short trip ends, the doll is sent back to its owner with an album of photos recording its stay at the cafe.

“When I see these photos [that show how my doll] relaxed at the cafe, I feel it’s very active, as if it was alive,” said Kotoe Ono, a housewife in her late 30s in Taito Ward, Tokyo, who used the service. “Now I have much more affection [for the doll].”

The cafe is operated by Kimiko Suzuki, who was in charge of marketing research on designs and demand for stuffed dolls at a toy manufacturer for 10 years. After learning about businesses for cleaning stuffed dolls and taking stuffed dolls on trips, Suzuki quit the company three years ago and started her own business.

The basic fee is ¥4,600 (P1,808) plus tax. Each opening is booked within about 10 minutes after applications begin to be accepted. Clients are mainly women in their 30s and 40s. The cafe has also received about 10 inquiries about using the service from people overseas, such as the United States and Hong Kong.

Suzuki, a self-proclaimed “nuigurumist” (lover of stuffed dolls), has been surprised at the popularity.

“I feel my stuffed dolls are my family. I want to share that feeling with other people through the cafe service,” Suzuki said.

“As people marry later and later in life, more and more people in their 20s to 40s who live alone want to find comfort and relaxation in stuffed dolls,” said Harumi Kozuka of the Japan Nuigurumi Association. “Fans of stuffed dolls have started interacting with each other through Facebook and demand for stuffed dolls has been revealed as a result. These factors have helped launch new businesses.”