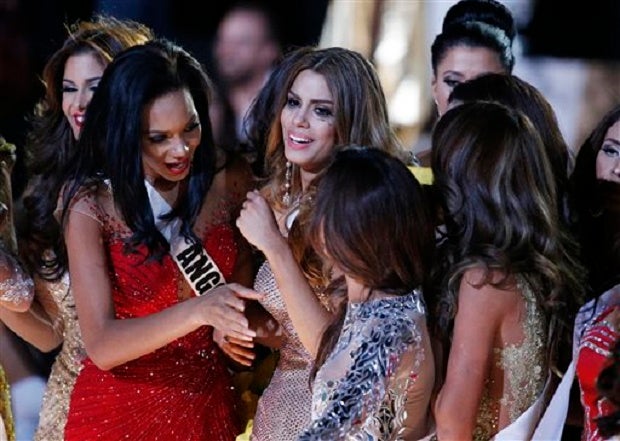 Other contestants comfort Miss Colombia Ariadna Gutierrez, center, after she was incorrectly crowned Miss Universe at the Miss Universe pageant Sunday, Dec. 20, 2015, in Las Vegas. According to the pageant, a misreading led the announcer to read Miss Colombia Ariadna Gutierrez as the winner before they took it away and gave it to Miss Philippines Pia Alonzo Wurtzbach. AP File Photo

Miss Colombia on Miss Universe: ‘In 4 minutes, they destroyed my dreams’

At first, Miss Colombia Ariadna Gutierrez seemed gracious in her defeat after being wrongfully crowned as the winner of Miss Universe 2015. Contrary to this, her recent interviews showed that Gutierrez has harbored ill feelings against the Miss Universe Organization.

In an interview with Spanish language television network Univision last Tuesday, Gutierrez lashed out against the Miss Universe Organization for supposedly disregarding her feelings.

Gutierrez added that the pageant organizers “could have done it another way.”

“I feel like it doesn’t matter to them the feelings of a girl who has worked her whole life for a dream,” she lamented.

Furthermore, the 22-year-old Colombian beauty queen shared that the aftermath of the controversial coronation night resulted in nights of crying and put her into a bad shape.

“I went up to my parents’ room and, obviously, I was very sad, I was in bad shape, I was crying. I cried a ton that night,” Gutierrez said.

Host Steve Harvey wrongfully announced that Gutierrez was the winner but rectified his mistake a few minutes after and announced the actual winner, Philippines’ bet Pia Wurtzbach.

In her television appearances as the reigning Miss Universe, Wurtzbach has said that she feels for Gutierrez and only hopes that the pageant would provide many opportunities for the Miss Universe 2015 first-runner up and for other contestants as well. AJH/RAM