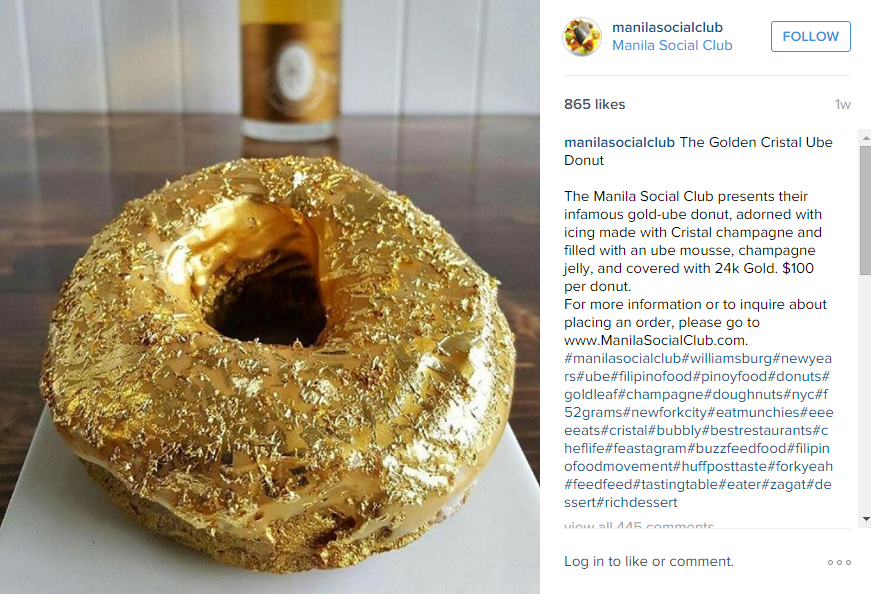 A Filipino chef in New York is making waves in the food world after a photo of his doughnut covered with 24-karat gold circulated on social media.

Bjorn Dela Cruz of the Manila Social Club in Williamsburg, Brooklyn was the mastermind behind the “Golden Cristal Ube Donut,” which was filled with ube (purple yam) mousse and champagne jelly and decorated with Cristal champagne frosting.

The golden doughnut costs $100 and has supposedly prompted New Yorkers to order it by dozens after a photo of it was posted in Instagram a week ago.

In an interview with food blog First We Feast, Dela Cruz said the idea of making a golden doughnut started in coordination with a brewery business.

“The Golden Cristal Ube Donut came along because there is a brewery in Bushwick called Braven Brewery, and we know the owners Marshall and Erik. We both started our businesses around the same time. We had a doughnut event where I unveiled a doughnut with icing made with Braven White IPA, dusted with gold. That was the beginning of the golden doughnut [idea],” he said.

Dela Cruz said he chose Cristal over other types of champagne because of its “really great honey notes which goes great with ube.”

“For me, it’s shiny and it’s golden, but it comes together to create a really great doughnut, as crazy as that sounds. There was a time when I was eating this doughnut while drinking Cristal, and I was like, ‘Oh, this is a great combo!’”

The chef said he used the ingredients that he used not because he wanted the doughnut to be expensive, but because he personally thought that they tasted good.

“To me, I think this tastes really amazing. It’s not just about the shock value, it’s a combination of it all… I tell my staff, look, if we want to make something really expensive, all we have to do is buy a bunch of Kobe beef, wrap it in foie gras, deep fry it, and cover it in gold. But there are reasons why we do everything. For example, if we’re using caviar, it’s because I want to add a salty aspect to the dish,” Dela Cruz said.

“This is a great thing about Filipino food. It’s never had these ingredients before. I make this rice porridge called Arroz Caldo—it’s like comfort food. There has never been an Arroz Caldo dish with truffles. But truffles go so well with chicken and so well with rice. Filipino food has always tasted good but it’s never been pretty. Now, we’re making it a little bit prettier and also tasting good,” he added.

Dela Cruz said the golden doughnut was originally created for the holidays, but added that they will continue making the product throughout the year due to “enough interest.” IDL