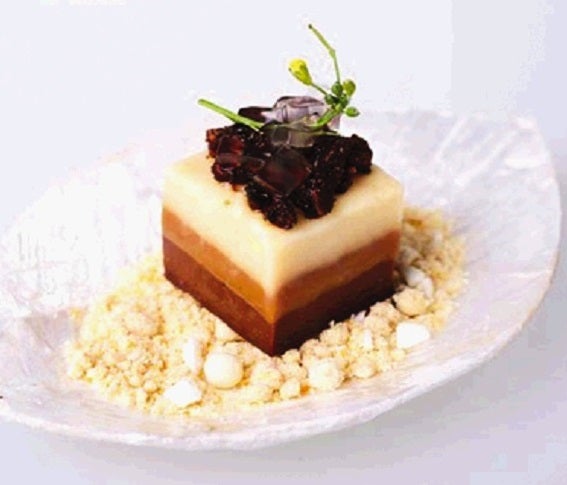 “SAPIN-SAPIN” (native rice cake) is apportioned so the different layers are visible.

All set for Madrid Fusión Manila 2016

Madrid Fusión, the popular international gastronomy congress from Spain, started drumming up excitement as early as mid-2015 in preparation for its much-anticipated 13th installment this year with the theme “The Post Avant Garde Language.”

And, like its previous editions, the lineup for the Jan. 25-27 spectacle is nothing less than stellar, with the likes of Daniel Humm and Grant Achatz from the United States, Mauro Colagreco, Massimo Bottura and José Luis “Chele” Gonzalez confirmed to attend.

The same fuss and frenzy are also building up in the country, with the recent announcement of the second staging of Madrid Fusión Manila, which is set April 7-9.

If 2015 highlighted more than 300 years of relations between the country and Spain, this year Madrid Fusion’s Asian edition traces the historic trade between two very different parts of the world with the theme “The Manila Galleon: East Meets West.”

Last year’s festival drew 22 participating countries, featuring 175 exhibit booths and 88 exhibiting companies, and was attended by 1,381 congress delegates and 4,106 trade visitors. With people now more aware of what Madrid Fusión Manila is all about, 2016 will prove to be an even bigger and more exciting staging.

Expected to attend are some of Spain’s finest, including Dani Garcia of two-Michelin-star restaurant Marbella, Ricard Camarena, Angel Leon, Jordi Butron who is recognized as Spain’s best pastry chef, and Joan Roca of El Cellar de Can Roca, No. 1 in the World’s 50 Best Restaurants list for 2015.

The lineup will be more diverse this year; likewise confirmed to attend are US-based Spanish chef José Andrés, David Thompson of Nahm in Bangkok, Nurdin Topham of Nur in Hong Kong, Kevin Cherkas of Cuca in Indonesia, Virgilio Martinez from Perú, Enrique Olvera and Jorge Vallejo from Mexico, Jungsik Yim from Korea and Yoshihiro Narisawa from Japan.

Representing the Philippines are two former “Top Chef” contestants who have opened restaurants in the US specializing in Filipino cuisine—Leah Cohen of Pig and Khao, and Paul Qui of Qui and East Side King. Completing the list are Romy Dorotan and Amy Besa of Purple Yam, Myke Sarthou of Alab, and Michael Aspiras of Scout’s Honor and Le Petit Soufflé.

Madrid Fusión Manila 2016 aims to expand the culinary conversation further. And with everything shaping up to a worthwhile and exciting event, more people will certainly be there to listen—and sample the food.