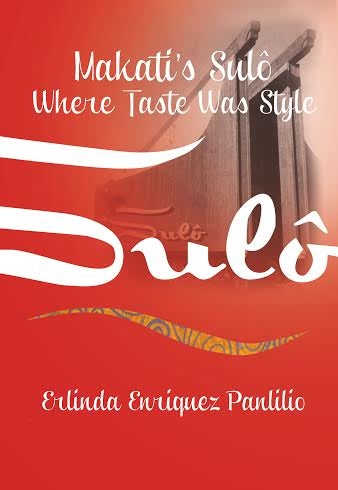 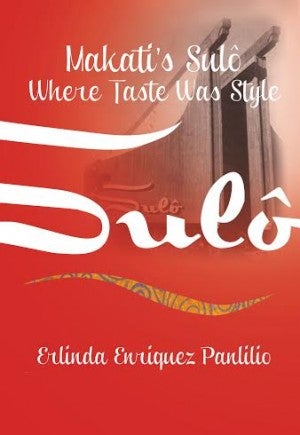 With the demolition of the Mandarin Oriental and the closure of Hotel InterContinental, Makati will arguably never look the same from an architectural point of view.

This is also true from a culinary standpoint, as the restaurants nestled within those structures are gone as well.

But it’s a Makati of a different time that is remembered in the new book, “Makati’s Sulô: Where Taste was Style,” by Erlinda Enriquez Panlilio (Anvil Publishing, Inc., Mandaluyong, 2015, 115 pages). This memoir-cookbook is essentially an expansion to the story first told by Panlilio in the terrific 2000 memoir “Teacher to Tycoon: The Life and Times of Trinidad Diaz Enriquez.”

In “Teacher…” Panlilio mentioned how her parents, Trinidad Diaz Enriquez and Modesto Enriquez, built the iconic Sulô restaurant in what was then a relatively untamed corner of Makati in 1963.

“My parents and I had not been to Makati,” Panlilio recalled. “It was terra incognita to us.”

“Makati’s Sulô” delves into more details, from the decision to establish a hotel, to how the Enriquezes developed the restaurant’s well-known cuisine and which famous individuals liked to frequent the restaurant, located near the similarly well-remembered Makati Supermart.

There are a number of interesting stories, such as Modesto coming up with the name on the spot (saying the torch symbolized Philippine hospitality) and Panlilio explaining how the history of Sulô links to both Makati and Philippine history. Panlilio provides old photographs that hark back to a different time; her written memories are both professional and personal. There are memories aplenty from many of the people who grew up eating in Sulô.

This culinary chronicle includes Sulô closing in 1989 when its lease ended.

“The redevelopment of the Makati Commercial Center had begun,” Panlilio writes. “It was even renamed to Ayala Center. Sulô had been a trailblazer in its time, with wine and food tasting, international food festivals, the Fiesta Filipina, memorable catering events… The Sulô’s time was up.”

One thing that makes “Makati’s Sulô” unique is the inclusion of the recipes that made the restaurant so loved. Panlilio explained this was not easy: “It was a problem recreating the Sulô dishes for this book, for there were no written recipes, because our cooks, like other great chefs, would simply scoop up some salt and pour vinegar or soy sauce into a dish they were preparing without measuring.”

Luckily, she found one last living cook from Sulô, an 84-year-old man named Salvador Quintana, who worked for the Enriquezes as far back as their legendary D&E Restaurant in Quezon Avenue. Panlilio somehow found him. He remembered the recipes and shared them with her.

These dishes are thus reborn in the pages of “Makati’s Sulô,” redone to the exact measures they never had before, and brought to life through the photographs of Patrick Mateo and the food styling of Ditas Antenor. The recipes include Sulô Filipino classics such as Fresh Lumpiang Ubod, Dinuguan, Pancit Molo, Pancit Luglog, Cocido a la Española, Adobong Talaba, Adobong Sugpo, as well as more continental fare such as Lengua en Salza Roja and Prawns Thermidor.

Whether you actually ate at the Sulô or merely heard of it from those who have, “Makati’s Sulô” is an important book in terms of how it records that restaurant’s contributions to Filipino food and Makati life. It also stands as a worthy companion to the earlier “Teacher to Tycoon.”

Erlinda Panlilio had a specific task in mind when she started working on what would become “Makati’s Sulô”: “With this memoir, I hope the Sulô will live again in the minds and hearts of people who enjoyed it as much as we had fun creating it.”

Consider it a task well done.