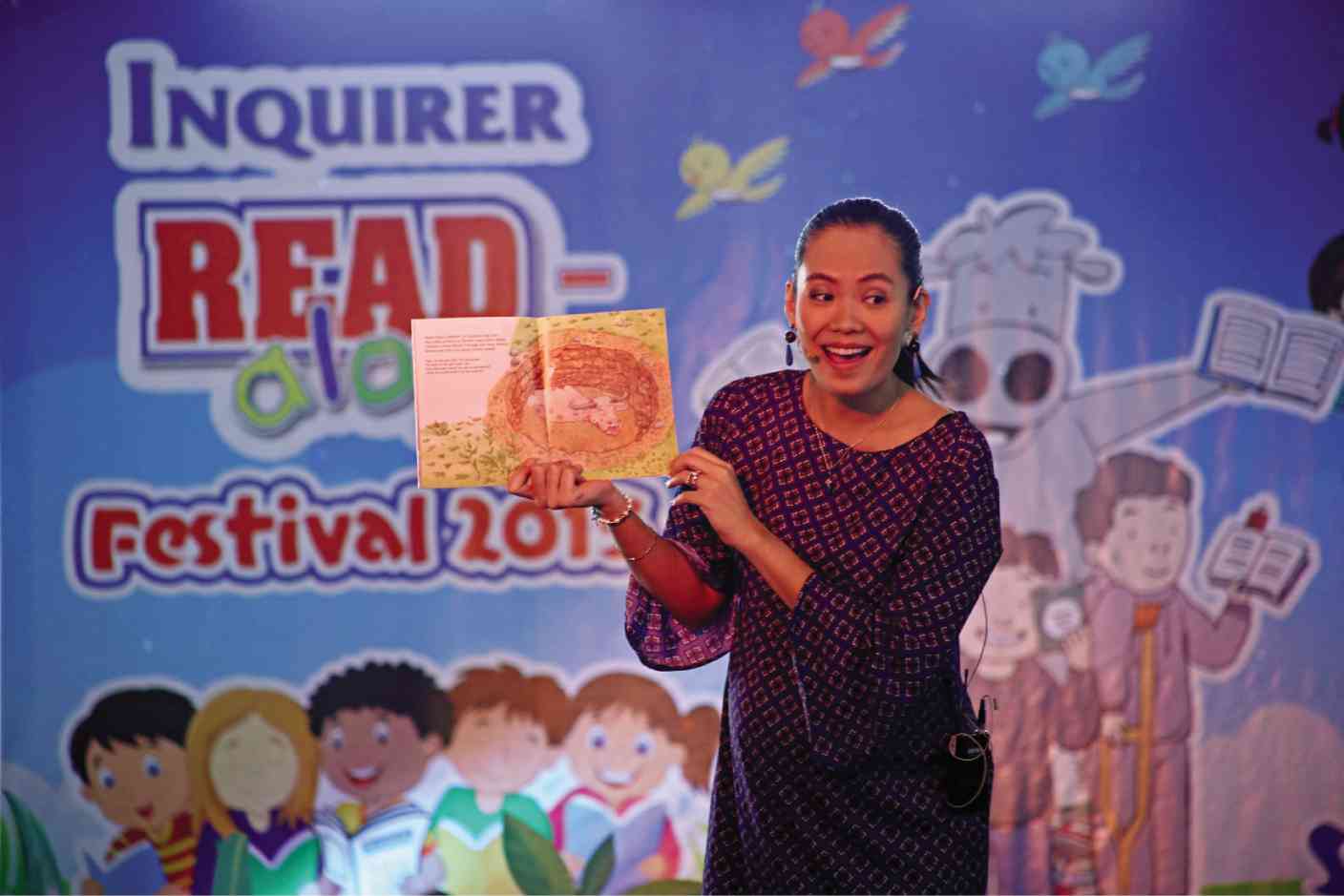 EDWARD Batac of the School of St. Anthony was crowned Read-Along Festival King.

Batac bested four other finalists in the storytelling competition that capped the 5th Read-Along Festival on Nov. 6-7, 2015, as part of the Inquirer’s 30th anniversary celebration, at the Cultural Center of the Philippines (CCP).

The annual festival, held every November to mark Philippine Book Development Month, is a two-day marathon of six storytelling sessions held in one venue.

This 2015, close to 1,000 children from Metro Manila and nearby areas joined the festival that featured 30 well-loved Filipino children’s stories and read by over 30 celebrity readers, including Inquirer president and chief executive officer Sandy Prieto-Romualdez and her son Nico and the United Kingdom’s Ambassador to the Philippines Asif Ahmad.

Festival King Batac and the other finalists read “Ang Bertdey ni Ray” written by Eline Santos and illustrated by Mok Pusung. The short story was based on the life of geologist Raymundo Punongbayan, former director of the Philippine Institute of Volcanology and Seismology (Philvolcs).

The late Punongbayan was the Inquirer’s first Filipino of the Year. His story is part of the Inquirer Guyito Reader series that will be launched as part of the newspaper’s 30th anniversary celebration this month.

The other finalists were Noah Roa and Michael Stephen Maglente of Optimus Center for Development, Christine Joy Liwanag of Comembo Elementary School and Aki Bukuhan of John Dewey School for Children.

More than 60 contestants joined the elimination round. Ten moved on to the semifinals. Five were named finalists.

During the opening ceremonies, Romualdez thanked partners CCP, Dunkin Donuts, McDonald’s, Metrobank Foundation, Rebisco, Points of Light and Read Across the Globe for supporting Inquirer’s advocacy to spread the love of reading among children.

Launched in May 2007, Inquirer Read-Along aims to promote love of reading among children aged 7-12 through storytelling sessions with celebrities, role models and professional storytellers.

Over 20,000 kids have participated in Read-Along.

Around 350 celebrities have read in Read-Along sessions.

A total of 319 Read-Along sessions have been held so far.

Over 250 local titles have been read in those sessions.

Read-Along has visited more than 50 cities.

The CCP has hosted the festival since 2013. Five Storytelling Kings or Queens have been crowned since 2011.

In December 2010, when the Inquirer celebrated its 25th anniversary, 25 simultaneous Read-Along sessions were held from Batanes to Tawi-Tawi.

Ten storytelling workshops were held by the team in Metro Manila and in Negros, Marinduque, Cagayan de Oro, Iligan and Cebu. Around 10,000 students, teachers and volunteers have participated in the workshops since 2008.

The Read-Along Storytelling Club, launched in October, has 59 founding members. Students and teachers from 15 schools have since joined the club.

The Read-Along program has won seven awards so far both here and abroad. In 2013, it won the silver in the World Young Reader Prize of the World Association of Newspapers and News Publishers. In 2011, it was declared overall grand winner in the communication management division of the 10th Philippine Quill Awards for staging 25 simultaneous storytelling sessions across the country.

The program has also been recognized by the National Commission for Culture and the Arts and the Reading Association of the Philippines.

Family that reads together

For Read-Along’s foremost ambassador, Romualdez, spreading the love of reading has become a family affair.

Since 2008, Romualdez’s sons Luca, Ben and Nico have been joining Read-Along sessions as celebrity readers.

This 2015 was 8-year-old Nico’s time to shine. The youngest of the Romualdez boys, Nico read with his mother Adarna House’s “Hipon and Biya” by Carla Pacis, a story about how two different sea creatures found a way to coexist peacefully.

“We practiced the story with his father Philip,” Romualdez said. Nico, she said, was encouraged by his brothers to participate in the storytelling “because they did it before.”

On Dec. 13, 2008, Luca, then 7, read S.J. Fore’s “Tiger Can’t Sleep” with his mom to an audience of about 100 kids during a special early Christmas Read-Along session at the Inquirer’s main office. The session was a “family affair” as it also featured Lifestyle columnist Tessa Prieto-Valdes, who read Virgilio Almario’s “Paradise of the Animals” published by Adarna House.

Luca returned on Dec. 12, 2009 for the special Christmas Read-Along. He read Augie Rivera’s “Xilef” published by Adarna House, a story about a young boy coping with dyslexia. Other readers were Luca’s mom Sandy and grandmother Marixi Prieto, Inquirer chair, who read Mary Ann Ordinario-Floresta’s “My Muslim Friend” published by ABC Educational Development Center. The story was about two friends who were of different religions.

Romualdez and sons led readers on Dec. 4, 2010, during the simultaneous Read-Along sessions held from Batanes to Tawi-Tawi to mark the Inquirer’s 25th anniversary. This time, Ben took center stage at the Inquirer Makati office, reading Adarna House’s “Putot” by Mike Bigornia. He was assisted by brothers Luca, 9, and Nico, 3.