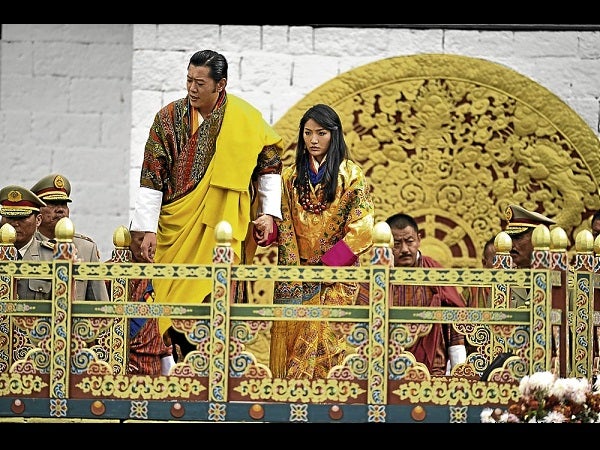 Bhutan royal wedding: We saw the colors of the rainbow 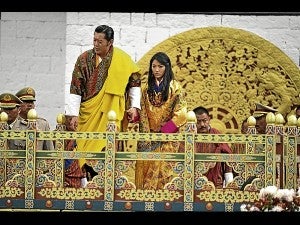 Bhutan’s monarch Jigme Khesar Namgyel Wangchuck wedded  Ashi Jetsun Pema at the Dewa Chhen-Poi Phodrang (Palace of Great Happiness) in Punakha last Oct. 13, and we were there to witness it, and it was like seeing the colors of the rainbow.

The Fifth Druk Gyalpo, the Thunder Dragon King–His Majesty Jigme Khesar Namgyel Wangchuck wore in a golden silk brocade gho which belonged to his great grandfather, the second King of Bhutan. The same gho was also worn by the third Druk Gyalpo during his wedding to Her Majesty the Royal Grand Mother.

Her Majesty the Queen’s wedding dress was chosen according to her traditional birth element. The queen’s birth element is earth; therefore she wore a yellow tego. The tego was embroidered with the auspicious eight lucky signs. The Kira worn by Her Majesty was a Shinglochem with golden threads which matched perfectly with the golden tego and red wonju. It was gifted to her by Queen Mother Tshering Yangdon Wangchuck.

The streets were lined with thousands of Bhutanese citizens waiting to catch a glimpse of the King and Queen. The people were not disappointed as the newlyweds actually walked a good portion of the route lined up with people (more than 30kms altogether), as they were expected to be in downtown Thimpu by 3 p.m. The citizenry had been waiting for them since 12 noon as they waited patiently in the streets till nightfall came upon Thimpu. 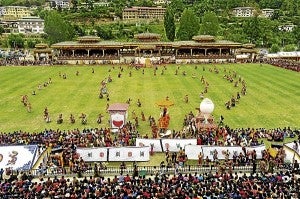 Day 3, at exactly 7:20 a.m., His Majesty and Her Majesty proceeed to TashichhoDzong from the southern gate of the Royal Lingka in Chhipdrel procession. The Grand National Flag was raised and the Guard of Honor saluted as the Chhipdrel passed by. After the presentation the Royal family and other dignitaries proceeded to the Chamber of the Golden Throne for a private prayer of Tashi Ngasoel ceremony with His Holiness the Je Khenpo. The ceremony concluded with Tashi Moenlam.

At 10:00 am the members of the Royal Family left for the Chang Lime Thang Stadium, as the King and Queen arrived at the main gate.

Buglers announced the arrival of the Royal Procession. The Procession entered Chang Lime Thang and made a formation in front of the Tashi Ngasoel Thongdroel. 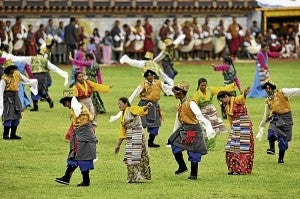 The King and Queen unveiled the Thongdroel, jointly lighted butter lamps and offered prayers. The Guru Nansi Zilnoen Thongdroel measured a massive 108 × 88 feet, the biggest thongdroel in Bhutan to date. The thongdroel was a wedding gift by Khenpo Sangay Chhoedak of Bumthang. The unique thongdroel was made in a massive artwork used about 3,000 meters of goechen (brocade) and took three years to complete.

The day was filled with many traditional Bhutanese dancers and entertainment presentation all day.

The King also danced with members of parliament, including the Prime Minister, much to the appreciation of the happy crowd.

His Majesty the King and Her Majesty the Queen joined guests in the grand finale of Tashi-lek pel.