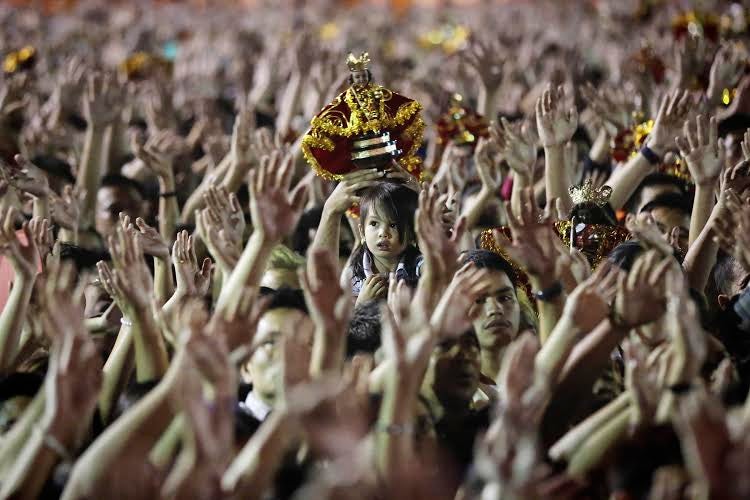 Santo Niño through the ages

HISTORICALLY, writes National Artist for Literature Nick Joaquin, the devotion to the Santo Niño (Holy Child Jesus) “outranks all others because the first church in the Philippines was built to enshrine an image of the Santo Niño—the image that arrived here with Magellan and was recovered and re-enthroned by Legazpi.” (“Almanac for Manileños,” Mr and Ms Publications).

This was the Santo Niño of Cebu which, Joaquin says, “is believed to have been carved in Flanders in the 15th century and was presented by Pigafetta to the Queen of Cebu when she turned Christian. Since then, devotion to the Holy Child has been intense in the Visayas, where the cult ranges from the Pit Senyor (a hopping dance to drums) among the Cebuanos to the anything-goes of the Ati-Atihan in Aklan.”

The Filipinos carried the devotion as far as the Spice Islands, where Filipino troops were stationed. When the troops were pulled out, a Christianized tribe in Ternate decided to migrate to the Philippines, bringing with them their patron: the Santo Niño de Ternate. The tribals arrived in Cavite along Manila Bay and founded the town of Ternate, which honors the Santo Niño on Jan. 6, Feast of the Magi or Three Wise Men, and now, the Epiphany, “when the Child manifested himself to the Wise Men.”

Joaquin adds: “In Manila, the shrine in Tondo is the oldest and most popular, the Holy Child having inherited the Kingdom of Tondo straight from the old rajahs, none of whom could have enjoyed a devotion as fervent as that which the Tondeños have been lavishing on their Little Prince for four centuries.”

In Tondo as well as in Pandacan, “the Santo Niño is proletarian, the dear Child of the Masses.”

Last year, the Kaplag Festival (Manila-Laguna-Cebu) celebrated the 450th anniversary of the finding of the sacred image by soldiers of the conquistador Miguel Lopez de Legazpi and celebrates, as well, 450 years of the Augustinian presence in the Philippines. “Kaplag” is a Visayan term for “finding” or “discovery.” The annual four-day religious festival is celebrated every April.

The discovery of the sacred image was taken as a sign of divine favor and protection.

The actual site where the Santo Niño in Cebu was founded became the church and convent of the Augustinians. Settlements and mission areas followed, gradually spreading throughout the archipelago despite the lack of missionaries. These proselytizing activities were carried out under the aegis of the Holy Child.

“We have a lot to celebrate,” said Fr. Harold Rentoria, commissioner of the Subcommission of Cultural Heritage of the National Commission for Culture and the Arts. He spoke at a recent press conference in the historic San Agustin Church in Intramuros, Manila.